Naomi Osaka hungry for her own chapter in Japan's tennis history

With two Grand Slams in hand, 'queen of Asia' has her eye on Olympic gold TOKYO -- When Naomi Osaka won her second Grand Slam at the Australian Open in January 2019, the first Asian-born player to win one, China's Li Na presented her with the trophy.

"Yeah, I mean, for me, I didn't expect to see her there. At first I was very shocked. I wanted to cry a little bit, but I didn't want to cry on this, like, podium. So, yeah, I was really touched. I just felt really honored ... that she was giving me this trophy," Osaka, the second Asian-born player to win a Grand Slam, said.

Inheriting the title of "queen of Asia" from Li, who won the 2011 French Open and the 2014 Australian Open, Osaka became the first woman from the region to top the world professional tennis ranking.

"When she was playing tennis in Melbourne, I said to Dennis [Li's husband], 'She's very good. I think if she wants, 10 grand slams -- easy to win,'" Li told U.S. TV news network CNN in an interview in Beijing.

Osaka has had success "because she is pretty strong, and also, and for her age, she has a lot of experience on the court," Li said at the Beijing edition of Road to Wimbledon, a junior tournament sponsored by the All England Lawn Tennis Club. "She knows what she has to do. She is smart," Li said.

Osaka is writing a new chapter in the story of Japanese tennis. "For me I just feel like I like to try break history, or make history," she said. "When someone says to me, 'No one has done this before,' that immediately becomes my goal."

Her immediate challenge is to win gold in the women's singles event at next summer's Tokyo Olympics, something no Japanese or Asian tennis player has ever done.

Asked about the difference between winning at the Olympics and winning Grand Slam titles, Osaka said: "The Olympics come every four years, and [there] are four [Grand Slam titles] every year. ... [W]hen I was a kid growing up, I would usually dream about winning a gold medal. I think every athlete is the same way."

For Osaka, the most impressive Olympic athlete is Jamaican sprinter Usain Bolt, who won the men's 100-meter dash in three successive Summer Games, starting with the 2008 Beijing Olympics. She is fascinated by Bolt's strength, and admires athletes like him who dominate their sports, including fellow tennis player Serena Williams and basketball star LeBron James, both of the U.S. "People have a tendency to like winners. We want to see them win more," Osaka said.

Osaka did not qualify for the 2016 Rio de Janeiro Olympics because her world ranking was slightly below the cutoff. Four years later, she will battle it out with the best in women's tennis.

She may be Japan's first truly global athlete, drawing attention both on and off the court. Osaka is often asked about social issues, including racism and women's rights. She said she was unsettled by this at first, but it does not bother her much now.

Attracting attention has "just become part of my life now. So I don't think about how to deal with it, I just think that these things come up from time to time," Osaka said.

She is also aware that she can have a positive effect on people. "I think everyone in the world wants to make an impact somehow. That is definitely one of my goals, too."

When she turned 22 in October, Osaka elected for Japanese citizenship over American, with an eye on the Tokyo 2020 Olympics. "I always represent Japan when I play," Osaka said, adding that the Olympics "are definitely one of the biggest group [sporting] events. I have never played in them before."

Osaka has grown used to the cheers of fans and being expected to win whenever she steps onto the court. The world is looking forward to her rewriting history again in the summer of 2020 in the country of her birth. 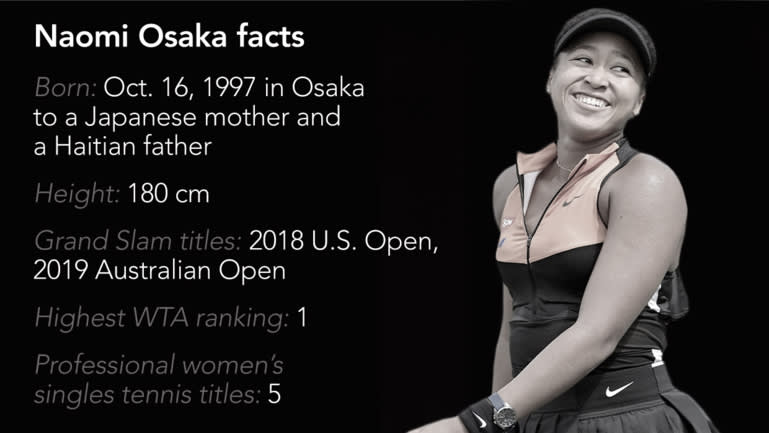