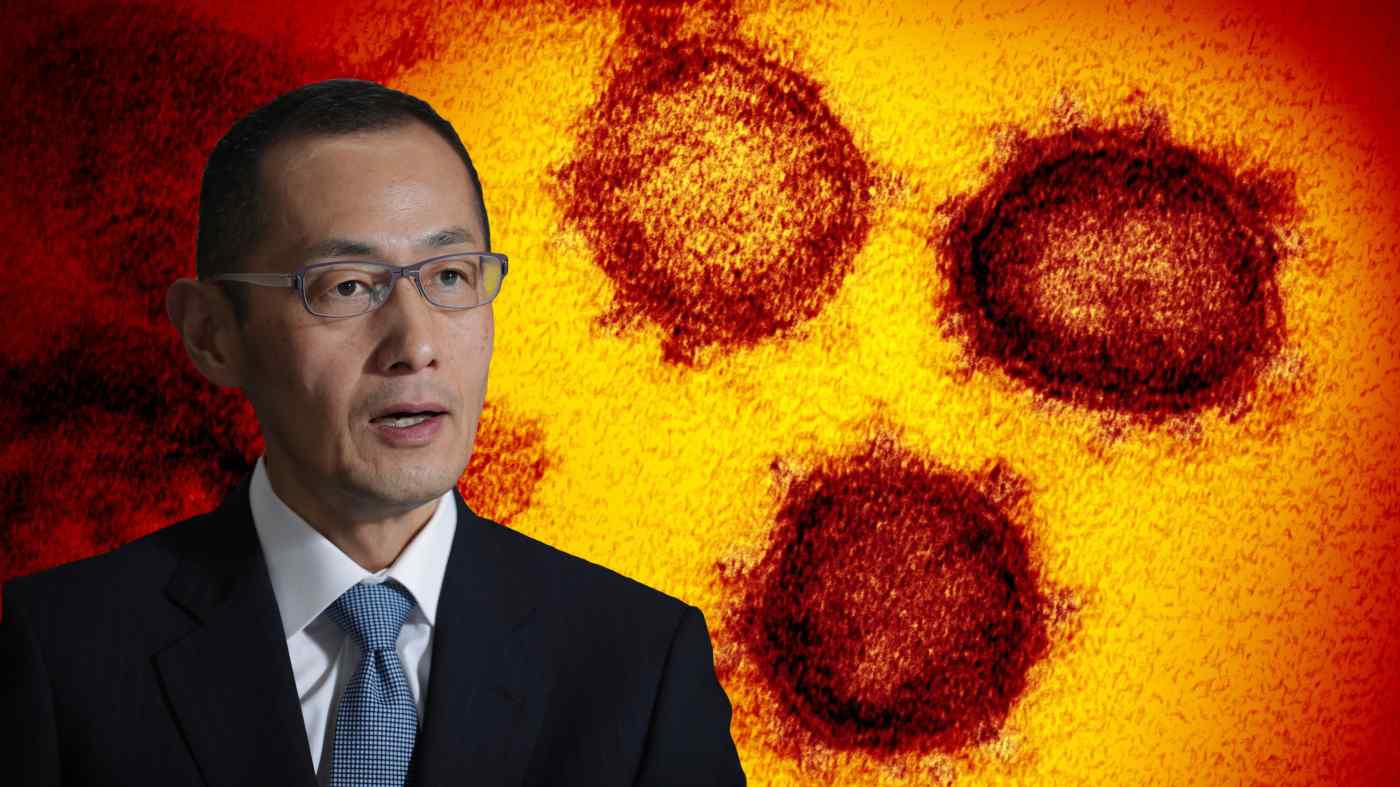 Shinya Yamanaka, winner of the 2012 Nobel Prize for medicine, is not a virologist but decided to start a blog to correct public misperceptions about the coronavirus. (Nikkei Montage/Source photo by Reuters)
MITSURU OBE, Nikkei staff writer and KIYOSHI ANDO, Nikkei senior staff writerApril 19, 2020 17:52 JST | Japan
CopyCopied

TOKYO -- Shinya Yamanaka couldn't sit still as he considered the possibility of a major coronavirus outbreak in Japan.

To the 57-year-old cellular biologist, it looked as if Tokyo was a month or so behind New York, which was being ravaged by the deadly respiratory disease. People in the Japanese capital appeared to treat the coronavirus epidemic as something with little bearing on their lives.

Fearing a potential catastrophe, Yamanaka, who won the Nobel Prize for medicine in 2012, rushed to create a simple website in March to provide information to the public about the deadly virus -- what it is, how it spreads, how it can be contained, how it might be cured. The website, updated daily, offers readers statistics, news reports and academic journal articles relevant to the virus that causes COVID-19.

"I really hope that Japan will be spared a major outbreak, but the chances of one happening are actually growing," Yamanaka said in an interview via Zoom.

"I'm especially worried about Tokyo and Osaka," said the professor at Kyoto University, who also serves as director of the university's stem cell research institute. He cites the rising number of cases in those cities despite limited testing.

Yamanaka is not a virologist but said the more he learned about the novel coronavirus the more agitated he became. "I couldn't help doing something," he said. Yamanaka decided to share his scientific knowledge and experience through a new blog.

He covers topics ranging from social distancing to drug and vaccine development. In one recent post, he highlighted Google data to show how Tokyo and Osaka are engaged in less social distancing than big Western cities. Another entry deals with the efficacy of the Bacille Calmette-Guerin, or BCG, vaccine, which has been used against tuberculosis in Japan since the mid-20th century, in preventing respiratory infections.

One of Yamanaka's goals is to correct public misconceptions about the coronavirus. When, for example, Prime Minister Shinzo Abe said on Feb. 28 that "the next one-to-two weeks will be key" after requesting a nationwide school closure, many people in Japan took that to mean that life would return to normal after a couple of weeks. People's eagerness to put the epidemic behind them contributed to a spike in infections in late March.

The sudden rise in infections prompted Abe to put heavier restrictions in place. He declared a state of emergency on April 7, asking people to reduce their contact with others by 70% to 80%. To keep the outbreak under control, epidemiologists say such restrictions will have to be maintained until a cure is found.

So far, however, Japan's lockdown has been voluntary; there are no legal sanctions for those who refuse to go along. Yamanaka believes scientists have a vital role to play in helping citizens understand the need for such measures, as the country struggles to contain the epidemic without resorting to government surveillance or the threat of force.

Yamanaka, an avid runner, compares the fight against the coronavirus to a marathon. "I am not at all optimistic" about the prospects for achieving a critical mass of support for a voluntary lockdown in Japan, he said, but added that scientists must continue the educational effort because the alternative is an explosion of infections.

"Social distancing would be easier to achieve with [legal] enforcement measures, as other countries [have], but Japan has a different political system," Yamanaka said. "We have to do what we can, which is explain to people patiently" what needs to be done.

Scientists are also called on to find treatments for COVID-19, but Yamanaka said fierce competition among researchers and the race to patent can stand in the way of breakthroughs. He urged the government to put in place a system that lets scientists be rewarded for sharing their knowledge and discoveries. Without such a system, "it will not be possible to defeat the pandemic," he warned.

While cases are still rising in Japan, the number remains much smaller than in Western countries. Scientists have put forward various explanations for the low infection and fatality rates in Japan, including the Japanese custom of wearing masks during cold and allergy season, a strong cultural preference for cleanliness, the fact that Japanese tend to touch each other less in social settings, and the country's universal health care system.

BCG vaccination in early childhood has been put forward as another explanation for the low rates of infection in countries such as Japan, South Korea and Singapore. But so far, none of these theories has been proven empirically.

Yamanaka, who also works for the Gladstone Institute in San Francisco, does not think Japan has a unique immunity to the disease. "It would be nice if there were reasons to believe that the novel coronavirus spreads more slowly in Japan," he said. "But you'd have to be a real optimist to bet on such a possibility."