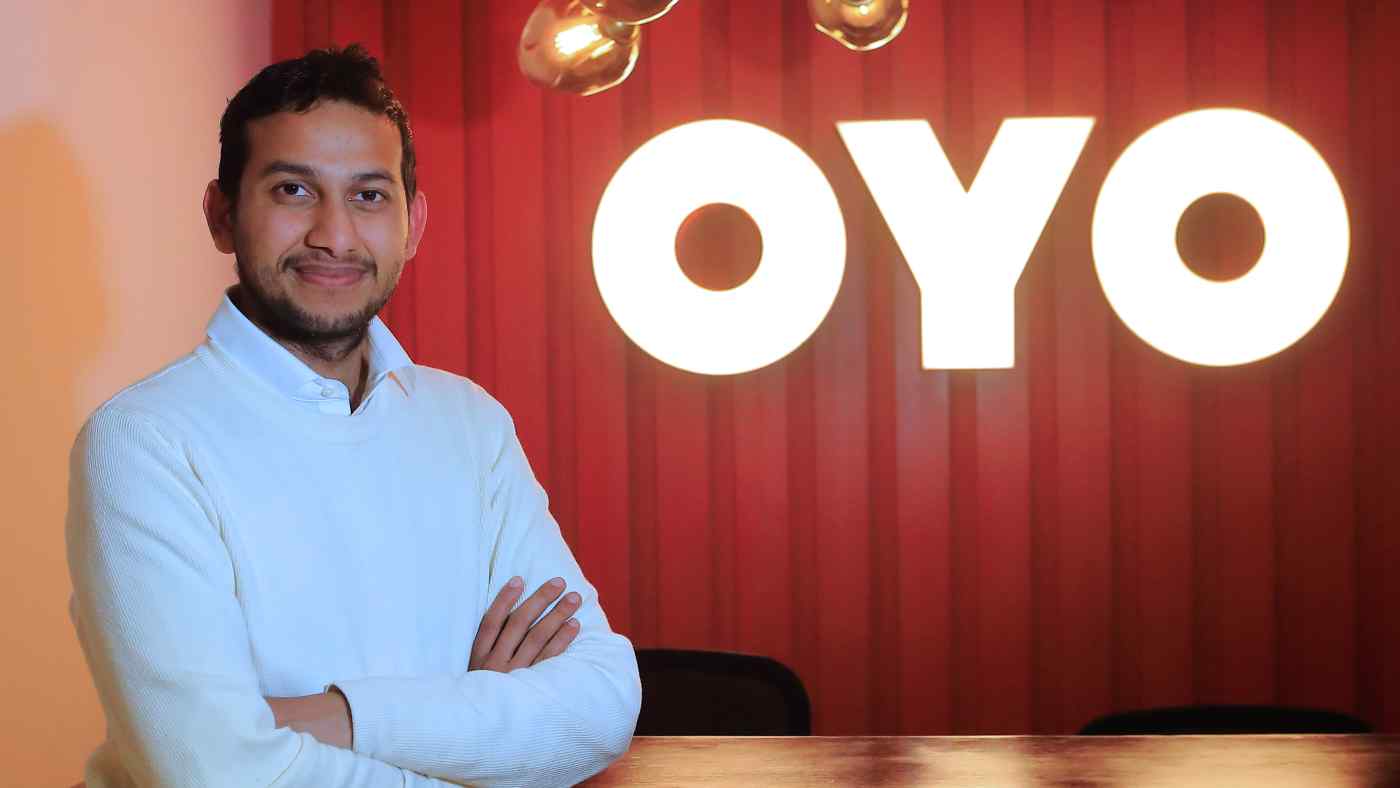 Oyo founder and group CEO Ritesh Agarwal says he has doubled down on his investment and has no intention to sell his stake in the near future. (Photo by Subhash Sharma)
KEN KOYANAGI, Nikkei Asian Review Editor-at-largeFebruary 10, 2020 13:31 JST | India
CopyCopied

NEW DELHI -- Indian startup Oyo Hotels & Homes and its young founder look to emerge stronger from a storm of complaints that threatens its reputation and tests its ability to apply a tech-driven business model to small owner-operated lodgings.

The 26-year-old group chief executive, Ritesh Agarwal, and his management team have shaken up the SoftBank-backed hotel chain company, he told the Nikkei Asian Review in a recent interview.

Steps include "right sizing" the organization by laying off over 1,800 employees in India and withdrawing from about 200 towns in the country.

"This restructuring is a one-time project that will be completed within a couple of weeks," Agarwal said. He declined to give specifics on job cuts outside India, but described the global restructuring process as "95% complete."

The reforms began last year as another SoftBank portfolio company, office-sharing startup WeWork, provided a high-profile example of the risks of growing at the expense of profitability.

While refuting many complaints and media reports about Oyo as "factually wrong," Agarwal said "we take every single allegation seriously," be it a media report, social network post or a direct customer complaint to Oyo's customer support, and "conduct a thorough investigation on each allegation." The fact that such complaints exist means "we deserve some criticism" and there are some things "we can improve upon," he added.

Oyo, which brings Uber-style booking and "dynamic" pricing to hotels, saw its operations grow 20-fold in just two years, from roughly 50,000 rooms in December 2017 to over 1 million in October 2019. Until the fall of 2018, it operated mostly in India and China. Now, the company offers hotel rooms in roughly 15 markets and vacation homes in more than 65 countries.

In January, Agarwal told employees in an email that, in the course of its rapid growth, "we sometimes went ahead of ourselves and pressure-tested our organization at multiple levels. This year, we are taking steps to address this."

The number of its direct employees in India stood at around 12,000 before the restructuring started in November. The number of Indian cities and towns where it listed available rooms was above 500 as of August and now is above 420.

Agarwal said Oyo's global head count will stand at roughly 25,000 after the restructuring, down from the recent "25,000 plus," implying hundreds of employees are being laid off outside India.

Another pillar of the reform was removing over 1,000 low-performing hotels from the 18,000-location network in India. Agarwal said these cuts, which he described as "tough decisions," were aimed at "better quality control and better economics." The reforms also included stricter hotel and service quality control rules, stronger training for franchisee hoteliers and employees, and tougher internal governance to prevent inappropriate business decisions and fraud, according to the CEO.

As a result, he said, customer complaints and negative online posts during the October-December period were "significantly reduced" from the preceding quarter. He wrote in a recent company blog that, among Indian hotel owners that had left the Oyo chain amid payment and other disputes, over 100 came back to the franchise in January.

Agarwal said he has put his money where his mouth is on the company's prospects for sustainable growth.

"I have doubled down my bet on Oyo," Agarwal said. "I have no intention of selling any of my shares in the foreseeable future."

Oyo announced last July that Agarwal would invest $2 billion in new and existing shares via his Cayman Islands-registered investment vehicle. His purchase of new shares for $693 million was completed in December according to a company filing, a deal that reportedly valued Oyo at $10 billion.

In the same fundraising round, Softbank Group's Vision Fund invested $807 million in new shares at the same valuation, making the round total $1.5 billion in new capital. In parallel, Agarwal is buying roughly $1.3 billion worth of existing shares from Sequoia Capital and Light Speed Venture Partners, which will remain major shareholders after the deal. 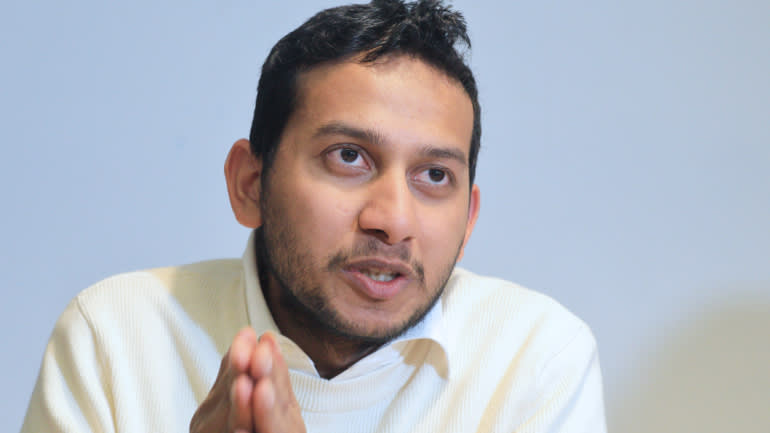 "Profit margins were razor thin till last November due to excessive supply and competition among Oyo hotels within the same areas," Deepak Rana, who runs 2,000 rooms in New Delhi and its suburbs, told Nikkei in early February.

"But after the restructuring, the supply-demand balance improved in this area and profit margins recovered to a reasonable level," the 33-year-old said. "Now I am resuming expansion. Actually, I am opening a new hotel with 45 rooms today."

Oyo's weeding-out of hotels was based not only on the economic viability of their locations but also on their compliance with quality standards, which are set in checklists containing as many as 150 items. As Oyo became stricter about enforcing these standards, business became more complicated, according to hotel owners and an ex-Oyo employee.

A former Oyo employee who spoke to Nikkei on condition of anonymity said every negative customer review on the Oyo app or social media would result in an additional penalty fee. If hotel managers failed to promptly fix problems, they would face more negative reviews and more penalty fees. This would often lead to money disputes between hotel owners and Oyo, during which time Oyo refused to make payments, leading hoteliers to complain more, the ex-employee said.

Another hotel owner said that if a hotel had disputes with Oyo and payment was pending, the hotel would force guests to cancel their prepaid bookings and demand cash payment for another room at check-in, so that revenue would not be withheld by the company.

This practice would often create confusion. The room offered for cash may have already been booked by another Oyo user, leading to trouble at the reception desk and complaints on the Oyo app and social media. Media reports picked up on such customer criticism.

Oyo last year started monitoring the Wi-Fi usage of each room in order to detect such undeclared occupancy, a clear contract violation by member hotels. If undeclared occupancy is detected, Oyo automatically deducts the room rate amount from its monthly payment to the hotel, which can, in turn, lead to further disputes.

Agarwal said most payment disputes with owners have been settled by offering a monetary compromise. He also said the company has introduced a new rule where any introduction of new fees or rule changes is now discussed in a panel that includes owners' representatives before being implemented.

Oyo needs to worry about its real-time dynamic pricing system itself, which is causing trouble during check-in, according to some hotel owners. The system adjusts the listed room rate of each room as many as millions of times per day to optimize the overall occupancy rate of most hotels.

A customer who booked a room two days ago may arrive and find the latest rate is much lower. In many cases, these guests demand their rates be aligned with the latest price, which Oyo prohibits hotels from doing.

Oyo said price fluctuations caused by dynamic pricing are common across different industries. "We are ensuring our dynamic pricing technology works in the best interest of both hoteliers and customers," a company spokesperson said.

A major factor in disputes with hotel owners seems to be poor communication owing partly to overreliance on email and other technology tools.

"Important advance notices for such matters as franchise fee commission rate changes or the introduction of new fees come in emails and nothing else," Rana the hotel owner said. "These days, people overlook emails quite easily."

"When I was working there, it was my impression that 99% of hotel owners don't read their contracts, which are sent by email and contain important clauses such as penalties," the ex-Oyo employee said.

Multiple hoteliers in the New Delhi metropolitan area told Nikkei in January that Oyo area managers do not take calls when the hotels need explanation or negotiation on new contract terms or penalties.

This suggests the organization has been overstretched and has often failed to respond to owners' needs and queries.

An invoice sent by Oyo in September to a Japanese hotelier reviewed by Nikkei shows the "contracted assured revenue benchmark" for the particular month as zero, without giving an explanation. The benchmark is defined in the franchise contract and is generally regarded by hoteliers as a minimum revenue guaranteed by Oyo. The owner said he felt it was a breach of contract.

Ken Miyauchi, chief executive of SoftBank's mobile telecom unit SoftBank Corp., which has a 25% stake in Oyo's Japanese hotel, told a news conference last Friday that there was "confusion over contracts last year between Oyo and hoteliers." He said Oyo's Japan operation had in October started using new, clearer contract templates, which are different from those used in India and better suited to Japanese laws and practices. Agarwal acknowledged that he and his management team had recognized as late as in mid-2019 that the company needed "high-quality management bandwidth" to run a rapidly growing organization. He said Oyo accelerated recruitment of executives and managers at "all levels in all markets" in the second half of 2019.

In the latest $1.5 billion series F fundraising completed in December, Oyo investors set an interim initial public offering target of Aug. 31, 2022, in a shareholders' agreement. As majority shareholder, SoftBank faces growing pressure on its own investment-focused business model, Oyo's efforts to improve profitability are likely to remain under scrutiny.

Agarwal said shareholders had not made any direct demands for cash flow profitability by a particular deadline. However, he said Oyo's management team agreed last December on three priorities for the coming months: sustainable growth, stronger relationships with hoteliers, and governance and training for better product and operation quality. These three priorities reflect all recent developments. from disputes with hoteliers to the global trend of investors demanding better profitability at startups, according to Agarwal.

In the meantime, Agarwal said he has made "no change" to Oyo's declared target of becoming the No. 1 hotel chain in terms of rooms under management, aiming to surpass Marriott International's roughly 1.3 million rooms by 2023.

That will require a balancing act between steadier organizational management and continued high growth.