MANILA -- The Philippine central bank is "open to doing more" monetary easing despite already record-low interest rates and still has "a lot of tools" to support the economy's recovery from the pandemic, Gov. Benjamin Diokno told Nikkei Asia.

The central bank chief's assurances come as the Philippines, like some of its neighbors in Southeast Asia, fights a new wave of COVID infections, threatening its bid to turn around a record 9.6% economic contraction last year.

Since the coronavirus outbreak early last year, the central bank has cut the benchmark interest rate by a total of 200 basis points to 2%, a record low.

"We're open to doing more, if necessary," Diokno said in an online interview on Tuesday. "But ... at the moment, the current policy setting is appropriate."

Apart from slashing interest rates, the central bank also lowered the reserve requirement ratio for banks, purchased an unprecedented close to 1.1 trillion pesos ($23 billion) worth of government bonds and granted billions in zero-interest loans to the national government.

The raft of monetary and liquidity easing measures have infused 2.1 trillion pesos into the financial system, the governor said, about 12% of the country's gross domestic product. "So we calmed down the market, and so there was no panic," he said. 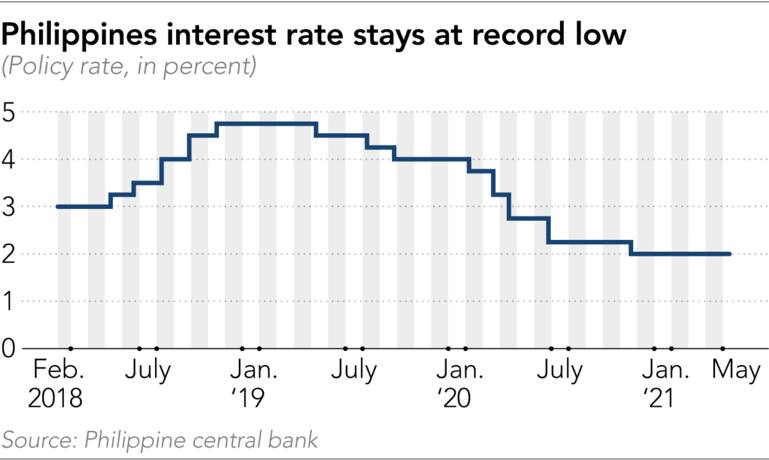 But these moves have yet to inspire banks to lend more and boost economic activity. Bank lending dropped by 5% in April -- the fifth straight month of contraction -- as wary lenders feared further defaults amid the recession.

"I think it has reached its bottom. I think banks will start lending from here on, because things really have improved," Diokno said. "And as we open the economy, there will be more economic activity, and therefore there will be more lending."

He said ramped-up COVID vaccinations will restore consumer and investor confidence, and the central bank is ready to deploy other tools to accelerate recovery. "We will have to do more if necessary," the governor said.

"Should there be more demand for loanable funds during the recovery process, we're willing to consider that," Diokno said.

"So, we still have a lot of tools, conventional tools. But we're not doing it at the moment because the economy is still considered [to be] on its sustainable recovery path," he added.

Duterte's economic team has downgraded this year's gross domestic product growth target to 6-7%, which is still higher than the Asian Development Bank's projection of a 4.5% expansion. Diokno said 6% is "doable."

The central bank has "done the heavy lifting during this pandemic," said Diokno, who was formerly Duterte's budget secretary. "We expect the national government to do its part on the fiscal side, and they're doing their part."

During the interview, Diokno also spoke about reforms to digitize the financial sector amid the pandemic.

The central bank last year introduced a new "digital bank" category for lenders without physical branches, to allow more people in the archipelago to access financial services. Around two-thirds of the population have no bank account.

"And so, to me, digital banking will help people have access to financial services that the traditional banks are not able to do so at the moment," Diokno said. "So, a combination of digital and the conventional banking system will be good for the Philippines."

Already, the pandemic has spurred growth of digital transactions. In April, the volume and value of transactions under its two payment facilities jumped by 276% and 127%, respectively, from a year ago.

The governor, however, is cautious on digital currencies. Diokno said he has formed a technical working group to study cryptocurrencies.

"And I think the conclusion is that none of our neighbors are likely to indulge in this in the next five years," Diokno said. "But we continue to look at cryptocurrency. To me, the major problem really is the volatility of cryptocurrency."