"The key challenge for the management is to develop the fourth leg of businesses, which is the bank or the financial services, potential investments in fintech and logistics and the like," he said in an interview on Jan. 8. The 51-year-old official, who will become the next CEO under a family succession plan, said he hopes these businesses will be "substantial" contributors to the company in five to 10 years.

CEO in the news: JG Summit's CEO-to-be is already putting ambitions into action

The younger Gokongwei classifies JG Summit's businesses into three categories: "consumer-facing" under which are its real estate unit and food and beverage arm Universal Robina; "commodity-related" that refers to Cebu Air and the petrochemical unit; and "investment income" from Manila Electric and PLDT, a telecom company.

From January to September last year, JG Summit's net income dropped by 7.9% to 21.2 billion pesos ($422.5 million) due to a rise in airline fuel costs and competitive pressures faced by its food and beverage unit. Revenues, however, grew by 14% to 202.6 billion pesos, thanks to a big boost from its petrochemical exports.

Gokongwei believes the company's core businesses will continue to grow, but that it must brace for the "cyclicality" of commodity-related ventures. For new sources of growth, JG Summit is looking into its banking unit, after years of deploying many resources into its airline, food, telecommunications and petrochemical businesses.

"We [JG Summit] are top three in terms of market capitalization, but our bank is No. 19 [by assets]," Gokongwei said, referring to Robinsons Bank, which he chairs. "I think we probably suffered from a lack of management focus couple of years ago." 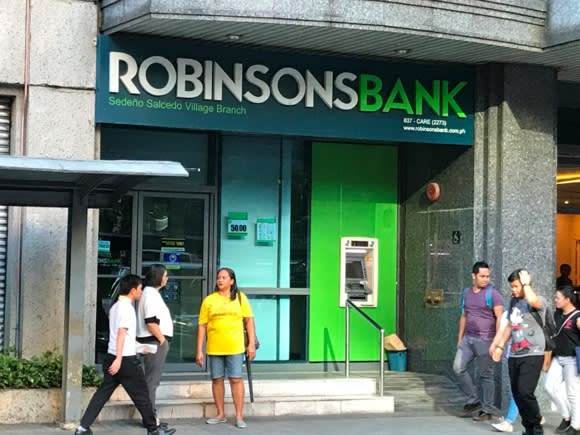 JG Summit has injected additional capital to quadruple the bank's assets by 2020 from 2015, when it had just 55.8 billion pesos. This was a far cry from lenders controlled by other conglomerates such as SM Investments-led BDO Unibank and Ayala Corp.-led Bank of the Philippines Islands, which had 2.48 trillion pesos and 1.63 billion pesos in assets, respectively, as of Sept. 2017.

Gokongwei said JG Summit has recapitalized the bank to increase its customer footprint, invest in technology and, expand its product offerings. On Jan. 8, the bank partnered with British insurer Pru Life UK for a bancassurance venture. Robinsons Bank will also bolster its services through financial technology.

Last year, JG Summit and HongKong-based startup Oriente teamed up to provide financial services for "underbanked" consumers and small businesses. The two are working on a service that could be launched this year.

Without elaborating, JG Summit's foray into logistics is also in the works, Gokongwei said, after investing in e-commerce platform Shopee last year.

Local conglomerates SM Investments and Metro Pacific Investments have recently added logistics to their portfolio. Ayala Corp, which has acquired a 49% stake in the Philippine operations of e-commerce site Zalora, is also mulling joining the fray.

Gokongwei said JG Summit has the assets to make a viable logistics business.

"We have the airline, property which can do all warehousing. We have a huge baseload of customers when it comes to retail and food. We are one of the largest consumers of freight in the country," Gokongwei said. "In terms of analytics, we have a loyalty program for airline, we have a loyalty program for retail business, so again, these are huge opportunities that can be eventually monetized."