Other countries, he suggested, could become part of that fabric at "the appropriate time."

The Quad meeting -- the second gathering of the four countries' foreign ministers after the first in New York in 2019 -- is the main purpose of the secretary's visit to Japan. He had been scheduled to stop in South Korea and Mongolia on his swing through Asia, but the plans were called off after the news that U.S. President Donald Trump had contracted COVID-19.

Pompeo sat down with Nikkei at the U.S. ambassador's residence in Tokyo. (Read transcript here)

He said he had spoken with Trump for an hour and a half before flying to Asia and that the president "seemed in good spirits," adding, "I'm confident American foreign policy will continue in the same way it has for the past three years."

Central to Trump's policy, the secretary stressed, is a "free and open" Indo-Pacific region. And he said the Quad has "already proven and will continue to prove very useful" in promoting that goal, with ties extending far beyond security in the conventional sense.

"Remember, when one talks about security, one's talking about economic capacity and the rule of law, the ability to protect intellectual property, trade agreements, diplomatic relationships, all of the elements that form a security framework. It's not just military. It's much deeper. ... It's the kind of power that democracies have [and] that authoritarian regimes can never deliver on."

His remarks may be a nod to the difficulty of formalizing a Quad structure solely focused on military ties. Japan, under a 2014 reinterpretation of its pacifist constitution, can come to the aid of an ally such as the U.S. only when its own security is threatened. NATO, on the other hand, requires collective defense, meaning members must defend one another regardless of whether they themselves are attacked.

India, meanwhile, has a reputation for preferring strategic autonomy and has pulled away from international frameworks like the proposed Regional Comprehensive Economic Partnership trade pact.

From its inception in 2007, the Quad was seen as a counterweight to China's emergence as a global power. The idea quickly lost traction but was revived in 2017 as U.S. President Donald Trump launched his trade war and tech offensive against Beijing. The discussions so far have focused on issues such as maritime security and 5G communications, and this time coronavirus countermeasures were added to the agenda.

The group's loose, informal nature, however, has raised questions about the prospects for concrete cooperation and continuity. Before Pompeo's visit to Tokyo, David R. Stilwell, the U.S. assistant secretary of state for East Asia, told reporters that "Quad membership is driven by shared interests, not binding obligations."

But all four countries are clearly wary of recent Chinese moves -- from flying military aircraft near Taiwan and sending ships into the waters surrounding Japan's Senkaku Islands, which China claims, to establishing military outposts on human-made islets in the South China Sea.

India-China relations are also tense after the two countries' troops brawled along their land border in the Himalayas in June, leaving 20 Indian soldiers dead. Australia-China ties continue to sour, too, with Beijing imposing trade sanctions against Australian goods including beef, barley and coal after Canberra called for an investigation into the origins of the coronavirus.

Pompeo said China's actions in the region amount to "bullying."

"This is the Chinese using coercive power. This isn't how great nations operate. So our mission is to reduce that."

Asked directly about Taiwan, Pompeo said the U.S. is committed to reducing cross-strait tensions. "We look to bring peace, not conflict," he said. But he insisted that "appeasement's not the answer."

"If one bends the knee each time the Chinese Communist Party takes action around the world, one will find themselves having to bend the knee with great frequency. So we have pushed back in a serious way with my diplomatic counterparts." 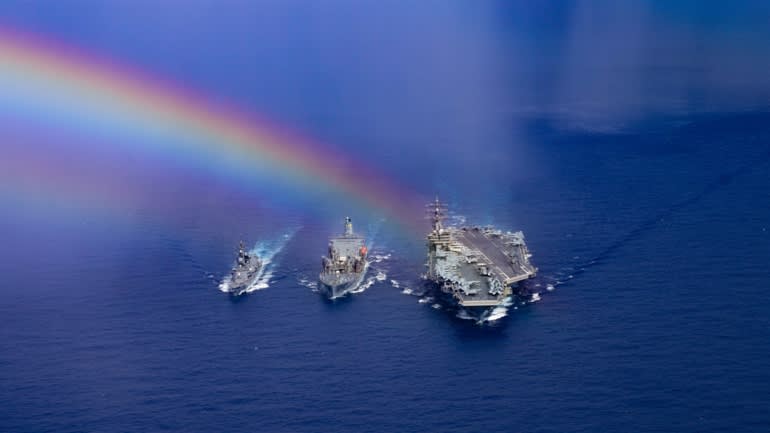 Japanese vessels link up with a U.S. aircraft carrier in the Philippine Sea in August.   © U.S. Navy via Reuters

That pushback earlier this year included the U.S. Navy sending two aircraft carriers into the South China Sea for drills in July -- the first time a pair of the hulking vessels had converged in the area since 2014. China sharply criticized the exercises, just as it has denounced the Quad, which it sees as an attempt to constrain its development.

"Instead of forming exclusive cliques, multilateral and plurilateral cooperation should be open, inclusive and transparent," Chinese Foreign Ministry spokesman Wang Wenbin said on Sept. 29, referring to the Quad meeting. "Instead of targeting third parties or undermining third parties' interests, cooperation should be conducive to mutual understanding and trust between regional countries," Wang said.

But Pompeo accused the Chinese Communist Party -- to which he repeatedly referred specifically -- of reneging on international commitments. He said Beijing promised the people of Hong Kong that "for 50 years you can have this deal, and then walked away from it." The same, he said, was true of vows not to "arm the South China Sea with weapons systems," which China "immediately proceeded to violate."

Pompeo sought to present the U.S. as a more reliable partner.

Earlier on Tuesday, he met one-on-one with Japanese Foreign Minister Toshimitsu Motegi and reaffirmed the countries' strong bilateral ties under new Japanese Prime Minister Yoshihide Suga. Pompeo and Motegi agreed on the need for a free and open Indo-Pacific as the "foundation" of regional stability, with the secretary calling the U.S.-Japan alliance the "cornerstone" of that.

In the interview, Pompeo pushed the U.S. concept of a Clean Network as one area for cooperation with Japan among many. "I want to make sure the citizens of Japan don't have their data in the hands of the Chinese Communist Party," he said. "This is something every nation wants, whether it's the Clean Network or our pushback against [state-linked] enterprises like Huawei, which ... show up with a business proposition which is nothing more than truly a network of the Chinese state to undermine the freedom and sovereignty of the country in which they're operating."

The U.S., he emphasized, offers another way.

"We're going to work with our friends as part of the Quad, we're going to deliver out a comprehensive set of relationships," he told Nikkei. "The kind of relationships that happen because of the warm ties between the American and the Japanese people. Those things permit us to work together in ways that China could never match."