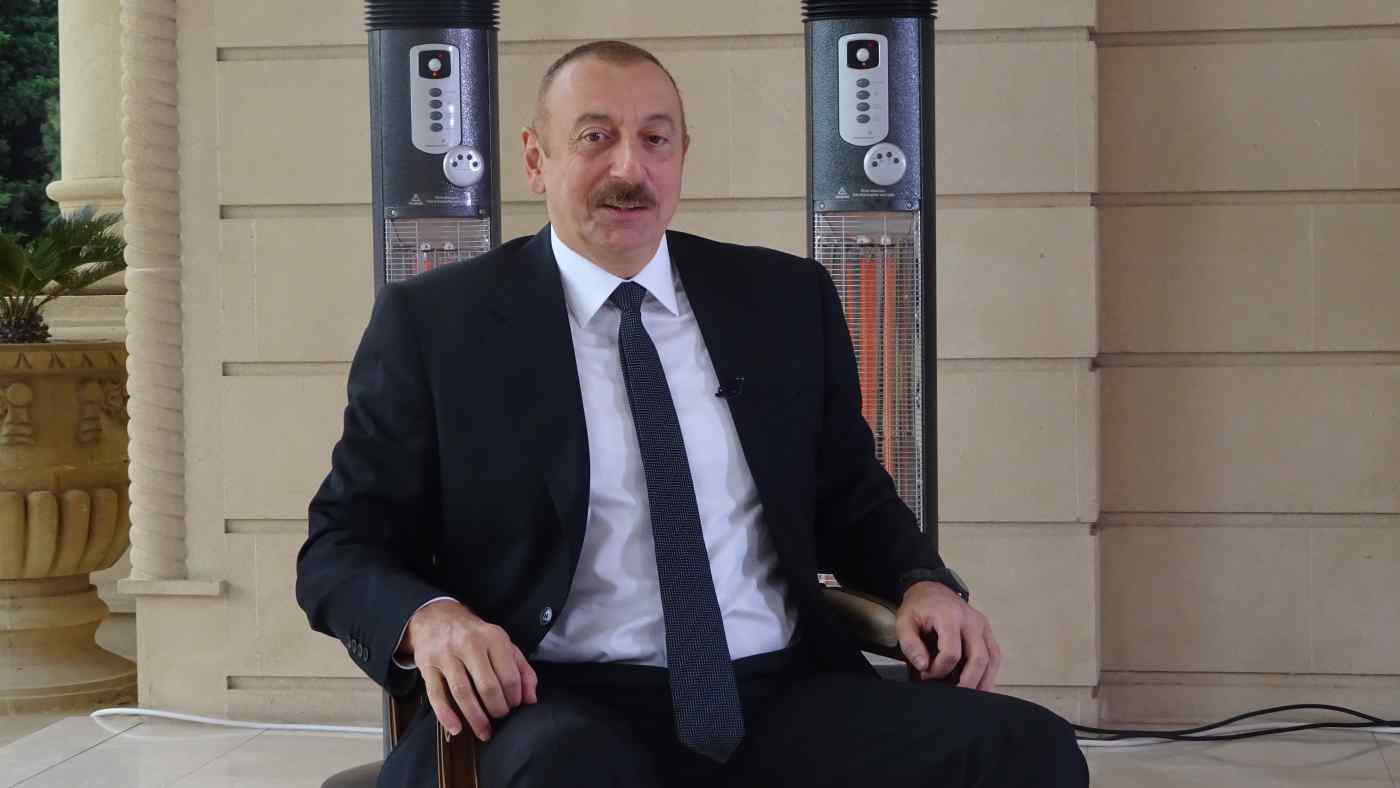 BAKU -- In an exclusive interview with Nikkei on Wednesday, Azerbaijan President Ilham Aliyev said he is open to a trilateral meeting with Armenian Prime Minister Nikol Pashinyan in Moscow, but claimed that "counterproductive and provocative statements" by the Armenians render "negotiations senseless."

Here are edited excerpts of the interview:

Q: Foreign Ministers of Azerbaijan and Armenia are to visit Washington on Friday. Are you ready for trilateral talks there?

A: The U.S., Russia and France are co-chairs of the Organization for Security and Co-operation in Europe's Minsk group and have a mandate to facilitate and find a solution to the conflict between Armenia and Azerbaijan, therefore it's natural that our ministers meet in these three capitals. These kinds of meetings have happened many times before. The last one was in Moscow. So it's a continuation of discussions on the peaceful settlement of the conflict.

Of course, the situation on the ground has changed. The status quo no longer exists. The line of contact also no longer exists. Therefore now the Armenian leadership must be more reasonable and commit itself to the liberation of occupied territories. So our main objective at these discussions will be to find out whether the Armenian leadership is ready to liberate our territories or not, and if ready, then when?

Q: Are you also invited to Moscow by Russian President Vladimir Putin?

Q: If there is any progress made in Friday's meeting in the U.S. between the foreign ministers, is it possible for a trilateral summit meeting in Moscow with the Armenian Prime Minister?

A: Of course, it is possible. These kinds of meetings happened before. It depends on what will be the agenda of this kind of meeting. Because with this Armenian government, unfortunately, the prospect for a peaceful settlement is very remote.

Counterproductive and provocative statements and actions on behalf of the Armenian leadership make the negotiations senseless. Because the main topic on the negotiation table has always been the liberation of territories of Azerbaijan in accordance with U.N. Security Council resolutions.

When the Armenian prime minister declares that "Karabakh is Armenian," declares that Azerbijan must negotiate with the so-called Nagorno Karabakh authorities, and when he orders a ballistic-missile strike on the peaceful city of Ganja and daily attacks on other cities of Azerbaijan, there is not much room for negotiation.

Therefore, we had to prove to the Armenian government that they cannot afford any longer to make aggressive steps without any punishment. We are punishing them on the ground. We are liberating our territories. Every day almost I announce new cities and villages which have been liberated from the occupation. Armenia is suffering a very bitter defeat on the battlefield.

Therefore, of course, they must be more reasonable. The matter of liberation of the territories is happening. We wanted to achieve it through peaceful talks. But due to the Armenian unconstructive position and provocative steps, it was not possible.

Therefore, we are now liberating our territories on the battlefield.

Q: Would you say the second ceasefire has already failed and that the battles are still going on?

A: Second attempts to achieve a ceasefire failed because two minutes after the ceasefire had started, they violated and attacked our peaceful cities. This morning from 6 a.m. until 8 a.m. they launched more than 100 shells on Terter and attacked our military positions as they wanted to regain territories which had been already liberated.

After the first attempt of a ceasefire, within less than 24 hours, they attacked from Armenian territories with ballistic missiles to the second largest city of Ganja, which is a war crime. The Armenian government will be responsible for that.

So the Armenian government should seriously think about their behavior and make a strong commitment if they want the ceasefire to be efficient.

First, not to violate it, and second, not to attempt regaining territories which we already liberated, and third, to make a commitment about the liberation of occupied territories of Azerbaijan. 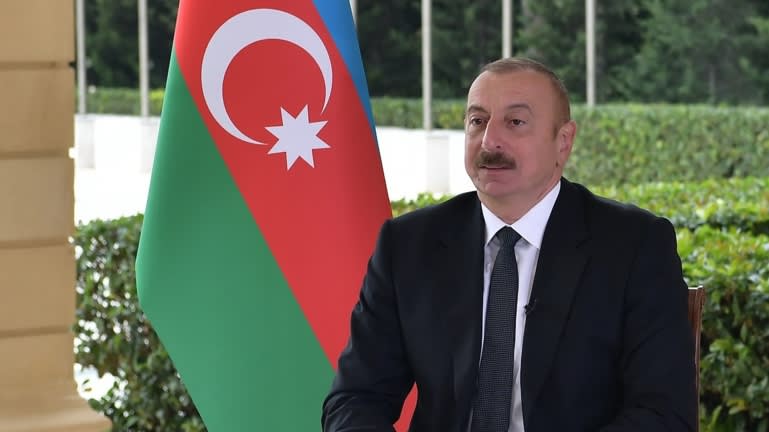 Azerbaijani President Ilham Aliyev said Armenians "must make a strong commitment that they will liberate" the contested region of Nagorno-Karabakh in an interview with Nikkei. (Photo courtesy of the presidency)

Q: So far, the ceasefires were for humanitarian purposes including exchanging captives and the bodies of dead soldiers. Will the ceasefire be a temporary one or a permanent one?

A: As you know in the Moscow declarations, there was a reference to substantive negotiations. The fact is that format of negotiations is unchanged. There will be no more attempts from the Armenian side to try to integrate the so-called Nagorno Karabakh authorities to the negotiation table, which is rejected by us and the Minsk group.

If Armenia commits to negotiations and with a strong commitment to liberate territories which they have so far not announced, then this ceasefire will be long term because we want to solve it peacefully. But if they will try to use the ceasefire in order to mobilize resources and get additional foreign military assistance and to launch new attacks on us, then the ceasefire will not last long. It depends on them.

Q: Would you demand Armenia to agree to withdraw from at least some of the seven districts occupied other than Nagorno Karabakh in advance?

A: They must make a strong commitment that they will liberate these territories because this is part of the basic principles which have been agreed by the two countries with the facilitation of the OSCE Minsk group.

Therefore, the Armenian government must clearly declare that they are committed to these principles and they will liberate these territories and then of course negotiations will start. We do not put precondition now that territories should be liberated first and later negotiations to start.

We, at this moment, demand from the Armenian side, from the prime minister personally, who is the person responsible for this violence and responsible for war crimes against peaceful Azerbaijanis, we demand personally from him saying Armenia will liberate the occupied territories. After that, of course, it will be transformed, the resolution of conflict [will move] from the battlefield to the negotiation table.

Q: Will you be ready to negotiate if Armenia says they are ready to withdraw from say, five districts first?

A: All territories of Azerbaijan must be liberated. All of them. Of course, we can talk about the timing and in the basic principles, there were certain ideas about timing on which regions first or which regions second, etc. This can be discussed, but all occupied territories must be returned and all Azerbaijanis must return to ancient lands.

Q: Do you want Turkey to have more say in Caucasus affairs and be active in this negotiation process?

A: It depends on the political agenda of Turkey. I cannot speak on behalf of Turkey. But what I want to say, is that, of course, we are always the strongest supporter of Turkish active involvement in regional issues. And actually, this involvement is obvious. Turkey plays an important role not only in our region, in the Caucasus, but also in the broader region and in the world. It is a reality and it is a very good reality for us.

Because for us, Turkey is a brotherly country and our closest ally and friend, and de facto Turkey is already involved from a legal point and also as a member of the Minsk group.

I said once in an interview that Turkey could have been even a co-chair if today we would have been selecting the co-chairs, definitely, Azerbaijan would have supported Turkey's candidacy and I'm sure Turkey would have insisted on becoming co-chair. In 1992, unfortunately, it did not happen. This is the legal part.

On the practical part, the presidents of Turkey and Russia, the foreign and defense ministers, talk and meet and discuss this issue. So, if someone says Turkey should not be there, like Armenia says, it's none of Armenia's business. Turkey is already there and must be involved because it will bring stability.

I think Turkey is the only country that has a border with the three Caucasian countries. No other country has borders with three of them, so of course, Turkey should be actively involved and Turkey is already involved and we strongly support it.

Q: Japanese companies are investors in Azerbaijan oil and gas projects and pipelines. Do you have concerns about the security of the pipelines? Is there any risk of postponement of the Trans Adriatic Pipeline which is going to be opened very soon this year?

A: No. With the TAP, everything is on schedule. It is already done. It's a matter of some additional weeks, not months for the official opening of the TAP. A historical pipeline from Baku to Europe has been completed. 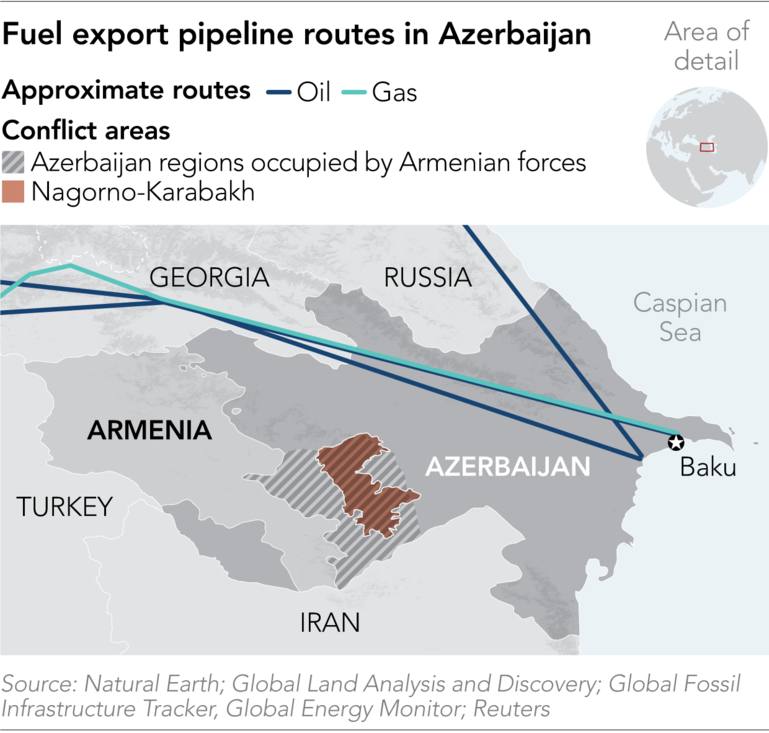 With respect to other pipelines which we have, the oil and gas pipelines on the territories of Azerbaijan, since 2006 when the Baku-Tbilisi-Ceyhan pipeline was commissioned, we did not have any accidents.

Our pipelines in our territory are duly protected. But of course, we heard threats from official Armenian representatives that they will attack our pipelines and the Sangachal Terminal which is very important for oil and gas transportation.

Of course, if they do it, they will regret it. Because they will be punished by us severely. And also, those countries, which today provide part of the energy security from Azerbaijan, what will be the reactions of those countries? Billions of dollars have been invested in these pipelines, [such as] all the leading international banks, like the World Bank, European Bank for Reconstruction and Development, Asian Development Bank, European Investment Bank, and other banks and investors.

The Armenian leadership should think twice about this kind of option. Of course, Azerbaijan itself will punish them severely, and I don't think that they will even dare to do this, which will be another war crime.