Q&A with Peter Navarro: Beijing hasn't abandoned Made in China 2025 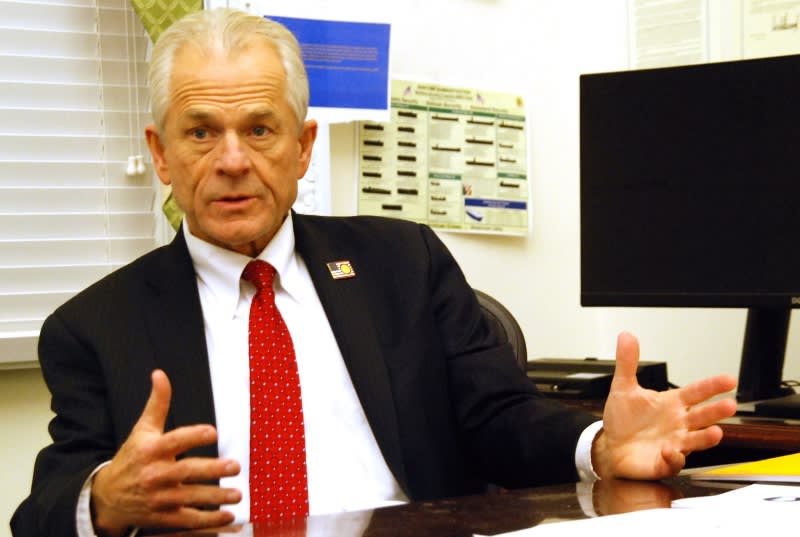 An edited transcript of the interview follows.

Q: It's been almost 20 days since the U.S.-China leaders' dinner in Buenos Aires. Are you satisfied with the Chinese actions since then?

A: This, as we say in the White House, is "not my lane." The chief negotiator is the United States trade representative, Robert Lighthizer, and the best way for us to proceed is to let him be lead and take care of all that. So, I really -- I may disappoint you here, but -- I don't have any comment on those negotiations, because Ambassador Lighthizer is -- that's his "lane," as we say.

Q: How do you see negotiations leading to the removal of tariffs on Chinese goods?

A: The genesis of this issue is the Section 301 investigation of China's discriminatory practices related to the targeting of America's technology base.

And we, here in America, share a tremendous concern with the Japanese people about China's attacks on technology, and what the Section 301 investigation clearly identified, as did my report that I did for the White House on China's economic aggression, what we identified was numerous vectors of attack on technology.

You have forced technology transfer. You have cyberintrusions and traditional espionage. You have state-directed investment. You have the whole five-year-plan approach in China to, basically, massively subsidizing and targeting these industries.

And, of course, on top of all of that, you have high tariff and nontariff barriers, which were designed to protect virtually all Chinese industry, manufacturing, high-end technology.

So, I think it's important for the Japanese people to understand the scope of what the White House is trying to do, in terms of how China is basically trying to steal the future of Japan, the U.S. and Europe, by going after our technology.

Q: How do you view "Made in China 2025?" Are you asking them to withdraw it or some kind of revision?

A: "Made in China 2025" is basically a label for a Chinese strategy to achieve dominance in the industries of the future, and China has recently made public statements about abandoning the use of the words "China 2025," but no one in Japan or the United States really believes that they have abandoned the goals of "China 2025."

So, when you ask the question in the way you did, it's really not about the term "China 2025," it's about the practices, acts and policies China uses to acquire the technology and innovation base of the U.S., Japan, Europe -- those are the primary targets.

[Pointing to a panel] We've got over 50 different practices here that China engages in. And, of course, the problem is that even if you get rid of 25 of these, there's still more than 25 left. Right?

Virtually everything on here is against the rules of the World Trade Organization. Right? So, if we're going to have a negotiation that results in success, you basically have to address these measures. There's no half-measures here. All of these things are significant. 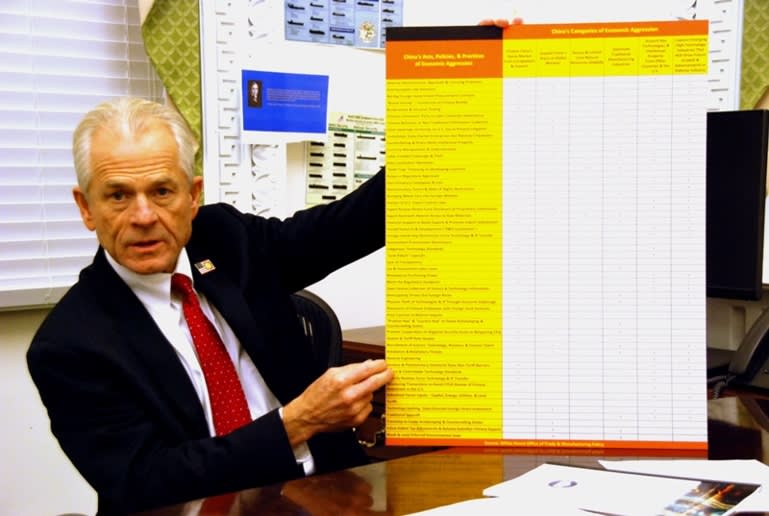 During the interview, Navarro points to a chart titled "China's categories of economic aggression." (Photo by Taisei Hoyama)

A: It's difficult. It's difficult, yes. I mean, the problem, of course, is the long history of China violating their commitments. 2001, the World Trade Organization. 2015, here in the Rose Garden, maybe a hundred yards away from here. Chinese officials promised the United States that they would not militarize the South China Sea and they would stop stealing intellectual property, stop their cyberintrusions.

Yet, today, there were more indictments of China government officials, working for the ministry, the MSS.

So, these are serious matters. And Japan, aside from the United States, probably has as much or more at stake in the China issue, of any nation in the world. I mean, you know the problems China-Japan have had, the anti-Japanese riots in, what, 2012 and 2014? The regular intrusions into Japanese airspace. The whole issue of the Senkaku Islands. The embargo on rare earth.

Let's see what the negotiation brings. But, I think that most of us understand how difficult this is, because of the culture, really, of intellectual property theft. It's part of their culture.

Q: You are saying that they must change their culture?

A: There must be structural changes in their economy, and in order to do that the culture must change.

Q: How about the Japan-U.S. trade talks?

A: Again, you need to go across the street and visit Robert Lighthizer. I don't -- I "stay in my lane."

But, the fact of the matter is that Japan takes advantage of the United States in terms of trade. We have a very large trade deficit with Japan. Japan has fairly low tariffs but has very high nontariff barriers.

We would like to have more balanced trade with Japan. And we would like Japan to bear more share of the national security issues in the region. And that's going well. Japan's increasing its defense expenditures and acting -- showing more leadership in the region.

Q: Some 80% of the American trade deficit with Japan is from the automobile industry.

A: Yeah, so let me ask you a question. I'll give you a quiz here. So, for every one car the U.S. exports to Japan, how many cars does Japan export to the U.S.?

Q: But Japan doesn't have any tariff on U.S. cars. The U.S. has tariffs on Japanese cars, 2.5% for vehicles and 25% on SUVs. You talked of nontariff barriers. What do you mean?

A: So, if we want to sell a car in Japan, one of the problems is the standards for environment and safety.

So, ours are very strict, but Japan wants us to abide by the Japanese standards, and as soon as you do that, it costs several thousand dollars more on the cost of the car. So that's effectively a tariff. Right? So, that would be one example.

It's also very hard to get our cars into showrooms because of keiretsu and the whole way everything's organized.

It's just a very difficult market to penetrate, because of the way Japan is. And this is a difficult thing, and Japan has to understand that President Trump is very serious about balanced and fair trade. So, let's see how the talks go.

Q: How about Japanese car exports to the U.S.? Are you thinking of quotas?

A: No, what I think probably will more likely result is that we'll see more Japanese car companies invest more here in the U.S., not just in assembly plants, but also build the engines and the transmissions and the electronics systems.

But we would like to sell more products to Japan.

Q: What is your view on the monetary policy of the Federal Reserve Board? Is there a possibility that Jerome Powell may be fired?

A: Fired? No, that's above my pay grade. That's another -- I have no comment on that. I mean, the president has made it clear that the Fed moved too far, too fast and that they were overaggressive. And, if you've watched some of the appearances of mine on television, I have stated the same. We don't understand why the Fed is acting so contractionary, at a time when there's no inflation to worry about.

Q: Even after yesterday's decisions?

A: Yesterday -- yesterday the Fed announced it would make two more rate hikes next year.

A: And we think that's two too many, based on the data.

Q One more question on Huawei. The Japanese government and Japanese companies are moving to remove Huawei products from their networks. Do you have a view on this issue?

A: Our government does not use Huawei phones. New Zealand, Australia, Great Britain, maybe Canada. And the reason is very simple. Those phones can be used to spy on our citizens or our government. So there's clearly a risk there. It's both a hardware risk and it's a software risk.

Because you're always updating the software, the operating system.

So, I'm not going to advise the Japanese government to do anything, but I can simply point out that those phones pose a risk.

Q: So, according to the White House statement in Buenos Aires, if at the end of this 90-day period the parties are unable to reach an agreement, the 10% tariffs will be raised to 25%. If both sides could reach an agreement, would you expect the U.S. to remove existing tariffs on $25 billion of Chinese imports?

A: Yeah, you just have to be patient and see what happens on March 1. Nice try, though.