TOKYO -- Renesas Electronics, one of the world's largest automotive chipmakers, says it will outsource more of its production, even as the Japanese government pushes to revive local semiconductor manufacturing.

While the Tokyo-based company produces some of its chips in-house, it relies on overseas chipmakers such as Taiwan Semiconductor Manufacturing Co. for its more advanced offerings, a strategy it intends to stick to in order to maintain its focus on profitability.

"For the longer term, as you move to more advanced nodes, we will have to rely on third parties," Sailesh Chittipeddi, a Renesas executive, told Nikkei Asia. The company can only produce chips with a transistor size of 40 nanometers or larger, a level considered a mature technology in the chip industry. "We have to rely on foundry partners for anything [of] finer geometry than 40nm," he said.

Created through the merger of Hitachi, Mitsubishi Electric and NEC's semiconductor operations in 2010, Renesas has carved out a profitable niche in an industry dominated by giants such as Intel, Nvidia, Qualcomm, TSMC and Samsung.

Chittipeddi is in charge of the company's nonautomotive business, which accounts for more than half of Renesas' revenue and two-thirds of its profit.

The company has been aggressively diversifying beyond automotive chips, with three multibillion-dollar acquisitions in four years: Intersil in 2017, Integrated Device Technology in 2019 and Dialog Semiconductor in 2021. The acquisitions have helped Renesas transform itself from a domestically oriented chipmaker into a global player.

"Think of us much more as a much stronger global competitor than we ever have been in the past, just focusing on a very narrow segment," Chittipeddi said. The company avoids price-sensitive consumer markets, where Taiwanese and South Korean companies tend to have the edge, he added, and will instead focus on serving individual corporate customers.

Analysts seem happy with the company's strategy, expecting a record profit for the company this year. But that is not to say there are no risks to Renesas' approach. 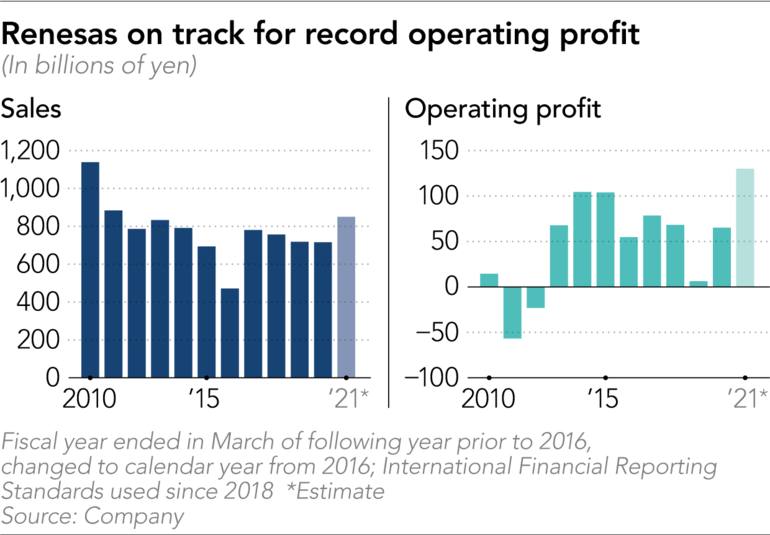 Chipmakers have a history of outsourcing production to third-party foundries and packaging companies to keep their own capital costs low. This "fab-lite" approach, however, also brings the risk of supply chain disruptions, such as shutdowns to production caused by the spread of COVID-19 in Vietnam and Malaysia, and bottlenecks in Taiwan. Geopolitics, such as China-U. S. trade tensions, can also cause chaos in the chip supply chain.

"With the political tensions that are occurring in the broader environment ... we always try to dual-source our products so we are not reliant on one region or one country for our supply," Chittipeddi said.

For chip packaging, one of the final steps in the chipmaking process, Renesas has production bases spread across Japan, South Korea, Taiwan, China and Malaysia. But for chip production itself, "it's a little bit more challenging," he acknowledged. "You need a more focused effort in order to diversify your front end [production], but we are starting to do that."

To address such concerns and build up the domestic chip industry, Tokyo led negotiations to bring TSMC to Japan. On Friday, Nikkei reported that the Taiwanese chip giant will jointly build a chipmaking plant in Kumamoto, in southern Japan, with two Japanese companies, Sony and Denso. The plant is expected to come online in fiscal 2023 or 2024.

Renesas, for its part, has said it welcomes any additional capacity and would like to take advantage of the Kumamoto facility, but it has never voiced a desire to invest in or own the plant.

Chittipeddi also discussed the chip supply crunch gripping the global tech industry, which has hit everyone from automakers to smartphone brands over the past several months. "It will take at least somewhere into a 2022 time frame before we can address the demand capacity imbalance," he said. "As to when exactly in 2022, it's probably sometime in the second half of 2022 or even as late as early 2023 for certain sectors."

The surge in chip demand was triggered by the COVID outbreak, and the impact is still being felt.

"The stay-at-home or work-from-home trend that was triggered because of COVID-19 has driven ... a sharp increase in demand for everything from computing appliances, to home appliances, to data centers for increased bandwidth," Chittipeddi said.

Even in a post-COVID era, "there is a very big push toward sustainability that is driving the need for more energy efficiency in appliances, as well as driving more effective use of power consumption," he added.

Renesas has been aggressively expanding beyond the stable yet not too profitable business of automotive chips, into an area called analog semiconductors -- components that convert analog signals such as sound, images, motion and temperature into digital signals for processing and then back into analog signals. Among the customers for such chips are global data center operators, telecom equipment makers, industrial robot makers and electric vehicle makers.

The shift has brought Renesas into competition with such top U.S. players as Texas Instruments, Analog Devices and Broadcom. Chittipeddi stressed, however, that Renesas does not aim to compete head-to-head with the "big guys."

By specializing in niche segments, it can stay out of the main battlegrounds, such as communication processors and data converters. For cloud data center operators, it only makes semiconductors used to manage power supplies, and memory interface devices, which coordinate the processor with the memory. For telecom equipment makers, it focuses on filters for eliminating signal noise and 'timing devices' for synchronizing voice, data and video.

"For us, it's all about the partnerships that grow with the market, rather than competing with the very big players in that area," Chittipeddi said.