KUALA LUMPUR -- The chief minister in Malaysia's eastern state of Sabah flatly rejected any Philippine rights to the territory in an interview, suggesting the government in Kuala Lumpur should take the intensifying dispute to the Association of Southeast Asian Nations.

Shafie Apdal, briefly endorsed by veteran statesman Mahathir Mohamad as the opposition's choice to replace Prime Minister Muhyiddin Yassin, joined Sabah leaders from across the political spectrum in blasting recent Philippine efforts to assert a claim that dates back about 60 years.

"The Malaysian government must make it a serious agenda under the ASEAN platform," Shafie told the Nikkei Asian Review. "This must be once and for all, resolved."

The Philippine campaign has included public comments by high-profile politicians and the passage of a law to publish a map including Sabah in the country's passports. This week, Philippine Foreign Secretary Teddy Locsin Jr. told parliament that he was reopening a bureau to push the matter.

"I have decided to reactivate the North Borneo Bureau after realizing that the rest of the world has forgotten our Sabah claim, casually designating it as another country's territory when we have not forgotten it," Locsin said, according to local reports.

"Sabah is ours," Locsin declared. "That's all there is to it."

But Shafie, who hails from a well-established political family in Sabah, insisted Malaysia has a strong case.

He said Sabah's decision to join the Federation of Malaysia was achieved via a referendum arranged by the British-initiated Cobbold Commission. The commission, led by former Bank of England Gov. Lord Cobbold, was set up in 1962 to gather feedback from the people of Sabah and Sarawak before the formation of Malaysia the following year -- consisting of Malaya, Brunei, Singapore, Sabah and Sarawak.

Brunei and Singapore later separated from Malaysia to form their own sovereign nations.

"That [referendum] is constitutional evidence that Sabah is part of Malaysia and it would remain that way," Shafie said. "No one should question the referendum."

Shafie also highlighted the timing of the renewed pressure from the Philippines. He is currently facing state polls after he appeared to lose majority support in the state legislature. Rather than resign, Shafie proposed the election, scheduled for Sept. 26.

"It seems to me that this issue only crops up during the election period," Shafie said. "I don't want to accuse anyone but somebody is using it as a tool to scare some of our voters here." 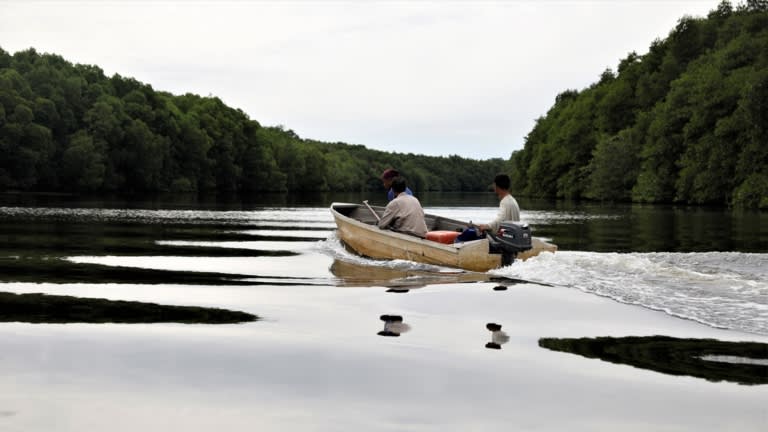 Villagers travel along a river in the Malaysian state of Sabah, on the northeastern tip of Borneo.   © Reuters

In February 2013, three months before Malaysia held federal polls, an east coast district in Sabah was invaded by a militant battalion sent by the self-proclaimed Sultan of the Sulu Sultanate, Jamalul Kiram III, based in the southern Philippines. Some 230 troops arrived in Sabah on boats, declaring that Kiram III was asserting the Philippine claim on eastern Sabah.

Malaysian security forces surrounded the village the group was using as a base and, after a 40-day standoff, negotiations failed and the fighting left scores dead.

Anifah Aman, who served as Malaysia's foreign minister from 2009 to 2018, said the federal government at the time did not see a need to push back against Philippines because "there was no case in the first place."

Anifah said Malaysia does not recognize any outside claims on Sabah and, like Shafie, believes there is an agenda. "It cannot be mere coincidence -- the Sulu intrusion [in 2013] and this happening right before the election," he said.

Chong Kah Kiat, who served as Sabah's chief minister for two years from March 2001, offered his theory on what that agenda might be. He thinks Philippine politicians are really speaking to a domestic audience, highlighting the Sabah issue as a rallying cry to maintain peace in the country's restive south.

"Besides ensuring peace," Chong said, "the politicians play up the issue when they want to win support in the region."

Chong said the Philippines should learn from its past failed claim on Sabah. In 2001, the country tried to intervene in International Court of Justice proceedings concerning a dispute between Malaysia and Indonesia over the Sabah islands of Ligitan and Sipadan. The ICJ rejected the request -- an indirect denial of the Philippine claims -- and ultimately ruled in Malaysia's favor.

"The Philippines said the application was submitted on the basis of its rights on Sabah, but the ICJ almost unanimously struck out their application," Chong added.