But they tend to be tucked away in rural areas, with little access to venture capitalists in Silicon Valley.

The Japan External Trade Organization, the Cabinet Office and the Ministry of Economy, Trade and Industry have tapped American seed accelerator Techstars to help mentor 24 Japan-based startups take the next step onto the global stage.

Through a 10-week program of coaching and connecting with potential investors, Techstars hopes that the startups can enjoy similar success to American unicorns it has helped grow, such as marketing email delivery provider SendGrid, automated drone network operator Zipline and online fitness class booking platform Classpass.

"What makes entrepreneurs really successful is the ability to connect," Techstars CEO Maelle Gavet told Nikkei Asia in a recent interview. "Connect to investors, connect to ... potential people that they will be recruiting, connect to mentors who will give them knowledge, and connect to business partners that will become their future clients," she said.

Gavet -- a French businesswoman who became CEO of Techstars in January after taking leadership roles at such companies as "Amazon of Russia" Ozon, the parent of online travel agency Booking.com, and SoftBank-backed real estate brokerage Compass -- said that the interest is mutual and that there is hunger among some Silicon Valley venture capitalists to explore underinvested geographies.

"We are at a stage in tech where it's all global," she said. "Money and investors go where there is talent and great ideas." An abandoned plot of land in Japan's Nagasaki Prefecture. Sagri uses satellite imagery to locate and measure the potential of the land. (Photo by Masayuki Kozono)

One could be Sagri, a 2018 startup whose name is a portmanteau of "satellite," "AI" and "grid." The Tanba, Hyogo Prefecture-based company makes use of publicly available satellite data, running it through its own artificial-intelligence- and grid-based mapping technology to gather real-time data and solve agricultural problems.

CEO Shunsuke Tsuboi has a little Elon Musk in him. As a child he was a fan of Buzz Lightyear, the spaceman action figure from the "Toy Story" movie franchise. In middle school, Tsuboi was mesmerized by the idea of a space elevator -- a way for anyone to leave the planet without traveling in a rocket. World peace and the creation of a space elevator are his life goals.

At the end of the 10-week session, in April, Techstars will hold a Demo Day for the startups to present ideas to potential investors. "This is our final milestone," Gavet said.

"For a typical Demo Day you would have local influencers, potentially investors -- for this specific project there's going to be JETRO," she said. "We try to give them maximum exposure."

At Demo Day, Kyoto-based mui Lab will present its wooden touch touch-screen system that serves as a control hub for household electronic appliances. Aiming to subtract the cold, robotic quality from digital devices, especially as people work more from home, mui proposes a "calm" interface for the smart home.

A wooden panel on the wall will show such messages as friends' birthdays, the daily schedule, the weather, and controls for lighting and music. Mui plans to install it at hotels and in homes. Mui's wooden touch screen offers the functions of a smart-home control hub but with a less robotic feel. (From the company's website)

While many Japanese startups have only Japanese-language websites, mui has a fully English version, reflecting an eagerness to reach out to potential global investors.

Hamamatsu, Shizuoka-based Magic Shields has developed Coroyawa flooring, which functions as a regular solid surface for walking but turns softens to absorb shock when someone falls down. It can prevent fractures from falls, an increasingly serious issue among older adults, the company said.

The roughly inch-thick mat is made of elastomer, a material used in automobile parts, which is assembled into the shape of a honeycomb. It supports the plastic polymer surface above so that wheelchairs can run over it smoothly. But when strong pressure is applied, it collapses to serve as a cushion.

Every year, 11 million older adults fall in Japan, of which 250,000 fracture thighbones. Among those injured, studies show that one in five die within a year.

Gavet said the coronavirus pandemic is an opportunity to meet potential partners in far-flung places because everyone is meeting online.

"We're going to continue to leverage that and really offer this global network in an even easier way than it has ever been before."

COVID-19 is opening the playing field for Tsuruoka, Yamagata Prefecture-based Metabologenomics, a medical startup that uncovers the complex relationship between health and the state of a person's intestines.

More than 100 trillion bacteria are said to live in the human gut, with specific types and amounts varying by individual. Metabologenomics analyzes stool to gauge intestinal health, predict potential illness, and offer recommendations for diet and exercise.

"Stool is brown gold," said Shinji Fukuda, the company's CEO. He sees the key to preventing new infectious diseases, such as COVID-19, in strengthening the immune system, based on a custom "gut design." 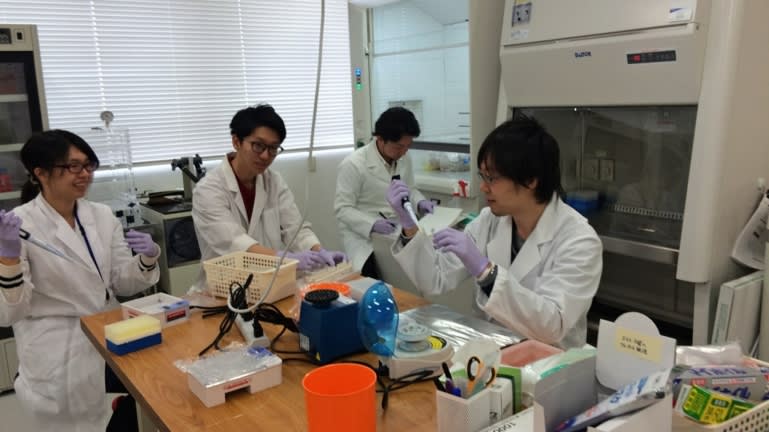 Gavet likes such optimism. "I have a huge faith in entrepreneurs," she said. "I think entrepreneurs are people who take whatever problem is in front of them and just make a successful business out of it."

In that sense, a startup that can ride, say, Sino-American tensions may emerge as a winner.

"Networks are a great way to mitigate some of these challenges, to brainstorm about how you can adapt to these new challenges to see ahead of the impact of these regulations," she said. "And so I think a lot of the success of entrepreneurs depends on their ability to connect, to have different, diverse relationships. This is where TechStars comes back into the picture and what the Japanese government is trying to do. How can how can we arm Japanese entrepreneurs with all the tools, and all the connection that they need so that whatever happens between China and the U.S., they will find something to leverage and to build the next generation of great Japanese companies?"