SINGAPORE -- Singaporean state investment company Temasek Holdings is looking to boost its investment in "aspiring unicorns," grabbing stakes in promising digital companies to secure high returns once they debut on the stock market.

"I would expect even in the next six to 12 months, we'll be doing a few more" investments in such companies in Southeast Asia, Rohit Sipahimalani, who leads Temasek's startup focus as a joint head of the investment group, told Nikkei recently in an exclusive interview.

"It's not going to make a material difference in the portfolio in the next one year or two years," he said. "But in the next five years, I expect to see this being a meaningfully larger number just because we see a lot of opportunities out here."

A strategy that defies the current trend toward greater scrutiny of startups and their profitability, Temasek last month acquired a stake in Indonesian online beauty product retailer Social Bella, which is rapidly raising its profile in a country with a large youth population and a blossoming e-commerce sector. The company is expected to become a unicorn -- an unlisted startup with a valuation over $1 billion.

Social Bella joins Singaporean fashion e-commerce platform Zilingo and martial arts event organizer One Championship as companies that Temasek calls "aspiring unicorns" and has invested in over the past year.

Temasek is "actively in dialogue with a few others in which we would probably invest in the next few months," Sipahimalani said.

Unlisted shares accounted for 48% of the 24 billion Singapore dollars ($17.4 billion) in new investment made during the year.

The increasing investment in startups reflects Temasek's belief that the digital economy will continue to grow through areas such as e-commerce, ride-hailing and online travel bookings. The fund forecasts Southeast Asia's digital market to reach $300 billion by 2025, tripling from 2019.

Temasek plans to stay aggressive despite the prolonged Sino-American trade tensions, expecting that earnings for U.S. and Chinese internet companies will remain solid.

The company's asset portfolio reflects the shift in policy. Financial services, telecommunications, media and technology, and transportation and industrial sectors accounted for 61% of Temasek's exposure in terms of asset value during the year through March 2019, shrinking from almost 80% a decade earlier.

In contrast, investment in life sciences and agribusiness rose to 7% after totaling just 1% a decade ago. 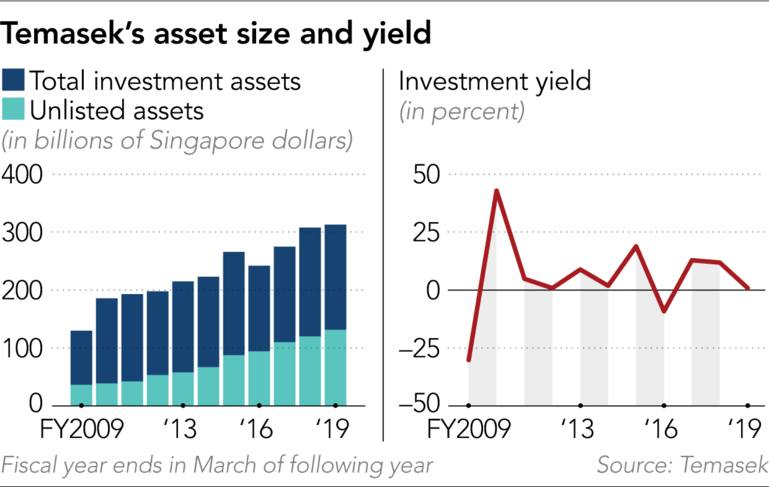 China now ties with Singapore as Temasek's top investment destination. Unlisted assets accounted for 42% of the fund's total as of March 31, rising from 28% over the past 10 years.

Temasek possesses dense information networks in the U.S., China, India and elsewhere that enable it to discover promising companies before others do and revise its portfolio quickly. The net portfolio value more than doubled over the past decade to SG$313 billion from SG$130 billion. The average 10-year return on investment stands at 9%.

Temasek also enjoys freedom from investor pressure, unlike private-sector funds. This lets the fund keep stakes in themes and companies it believes will produce sustainable growth.

Sipahimalani said startups particularly benefit from Temasek because the fund can invest at different stages of growth.

"If we come in at an earlier stage, we can keep supporting them in subsequent rounds," he said. "If they are performing and we have a good partnership, we can keep funding them."

When U.S. plant-based alternative meat developer Impossible Foods raised $300 million in May, Temasek led the funding round like it did in July 2017.

For an investment company with a massive portfolio, the money devoted to one startup usually exceeds $50 million. Temasek's venture capital arm handles investment in smaller firms that do not meet its asset management criteria. Vertex Holdings looks to complete financing of $1.3 billion for a new fund by year-end and invest in companies in the U.S., China, India and Israel.

The Vertex unit was the first backer of Grab, providing money in 2014 to the Singapore-based ride-hailing company that debuted in 2012.

CEO Chua Kee Lock told the Nikkei Asian Review that Vertex has local teams with good networks to capture opportunities. Each local team has an investment committee and decides what to do in the market because they know best what is happening there, he said.

"Startups are indeed riskier than most publicly traded established firms, but the rewards for investing in the right ones are also exponentially higher," said Jeffrey Halley, senior market analyst at OANDA in Singapore. Vertex's funds achieve 20% returns, much higher than Temasek's. 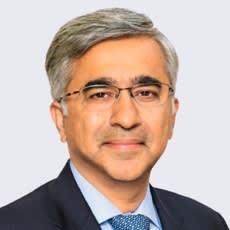 Temasek is a contributor to Singapore's coffers, along with fellow state fund GIC and the foreign reserves.

The total contribution is projected to reach SG$17.1 billion in fiscal 2019. That figure would surpass corporate tax revenue of SG$16.7 billion and goods and services tax revenue of SG$11.6 billion as the largest income source for the city-state. As social security spending rises with an aging population, the investment in startups aims to support government income in the future.

But putting money into startups comes with risks, especially when the valuations of unicorns are under scrutiny. The We Company, parent of U.S. co-working space provider WeWork, was valued at $47 billion at the start of this year, but that figure now is thought to sit at $20 billion.

"What we've seen recently is that the public markets are not that receptive to companies who do not have a clear path to profitability or positive cash flow," he said.

Temasek itself invested in WeWork's China unit, joining Japan's SoftBank Group and other backers in a $500 million fundraising last year. Co-working spaces are viable business models, Sipahimalani said, but the key issue is the base of growth.

"What people are saying is we don't want models where you are just focusing on growth and there is no visibility as to when you are going to come to break-even," he said. "So I think that's the balance."

"If the world falls into a structural recession, life will get just as hard for startups as well," Halley said. 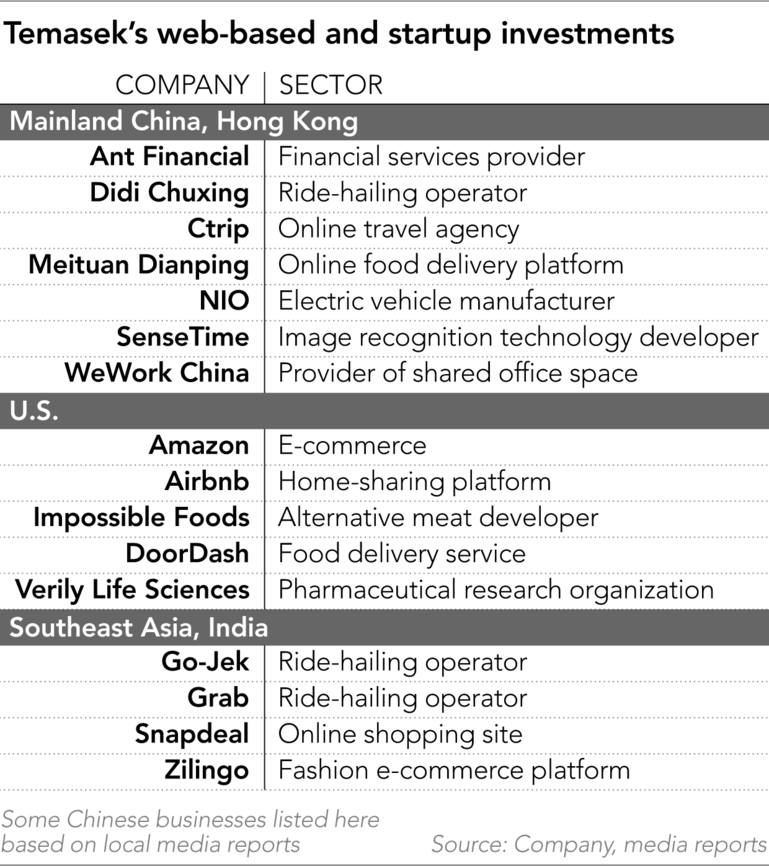