SINGAPORE -- Singapore's PropertyGuru aims to rapidly expand its financial services arm as it prepares for a U.S. market debut and a future beyond its core business in real estate listing.

CEO and managing director Hari V. Krishnan told Nikkei Asia in an interview that financial technology will play a big role in the company's transformation, saying its background in property will help it create a more complete fintech product.

"Fintech is absolutely part of our future," he said. "The largest asset class in the world is real estate, by far, and if you are going to build a financial services product and ignore the largest asset that exists, it's an incomplete product."

His goal is for financial services to make up 12% of the company's revenue by 2025, from just 1% currently.

To fund those fintech ambitions, PropertyGuru is set to list on the New York Stock Exchange via a merger with a SPAC backed by billionaires Richard Li and Peter Thiel, in a deal that will give it an equity value of about $1.78 billion.

SPACs, or special purpose acquisition companies, also known as "blank check" vehicles, are shell entities established to raise money through an initial public offering in order to eventually acquire -- or merge with -- a target company. For the target company, this offers a quicker route to going public.

Unicorns -- young companies valued at $1 billion or more -- often list their shares as part of their quest to expand into new markets and reach more consumers.

Krishnan, however, said his company is focused more on deepening its engagement in its current markets.

The money raised from the SPAC merger will be used to further anchor the company's presence in its five markets of Singapore, Indonesia, Malaysia, Thailand and Vietnam, he said.

"We do [a] few things and we do them well," he said. "Our goal is very much going to be to go deeper into these five markets rather than going broader." 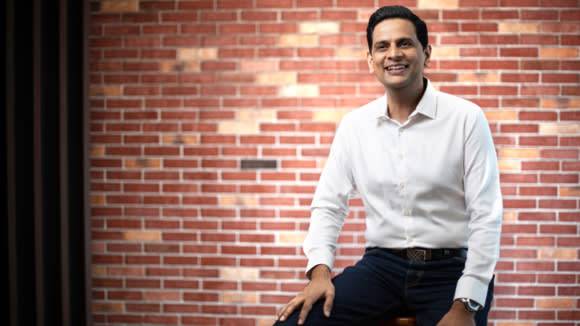 One of the "few things" the platform intends to do well is develop fintech offerings to serve the real estate needs of hundreds of millions of people in the region.

The 10-member Association of Southeast Asian Nations offers a tantalizing value proposition: a total population of over 650 million and the world's fourth-largest economy in the coming decade, according to the World Economic Forum, which will include a massive middle class and a consumer market worth $4 trillion.

Another reason for PropertyGuru to remain rooted in ASEAN is the growing numbers of wealthy individuals who will be looking to real estate to park their money. This, the CEO said, is where the property technology company sees its services fitting in.

It had planned to list in Australia in October 2019 when it tried to raise about 380 million Australian dollars (around $280 million), but the plans fell through, which the company attributed to uncertain market conditions at the time.

In May, PropertyGuru announced plans to acquire rival platforms in Malaysia and Thailand to cement its position as Southeast Asia's dominant online housing marketplace.

It has bought all of the shares in the units of Australia's REA Group that run iProperty.com.my and Brickz.my in Malaysia, as well as thinkofliving.com and Prakard.com in Thailand.

Currently, PropertyGuru derives 75% of its revenue from subscription packages it offers to real estate agents for them to target homebuyers, while 25% of its takings come from services offered to property developers, such as marketing.

Minus non-recurring expenses, the company's adjusted earnings before interest, taxes, depreciation, and amortization has been positive in recent years, but CEO Krishnan said PropertyGuru is set to see a negative adjusted EBITDA this year, partially due to headwinds from the COVID-19 pandemic.

Its increasing pivot to fintech, with the aim for financial services to comprise 12% of the company's revenue in five years, offers a way for the company to diversify its income streams amid pressures from the operating environment.

One of its first fintech offering came in 2020, when PropertyGuru launched a mortgage marketplace offering loans and advisory services to home seekers in Singapore.

In Malaysia, it had already been providing a digital service to assess prospective property buyers' creditworthiness prior to their applications for home loans.

In Singapore, users are able to compare, select and secure home loans with input from advisers, as well as seek refinancing options for loan packages they have signed up for.

"In just over a year, we have already brokered over 1 billion Singapore dollars' ($736 million) worth of home loans, so that's a very quick start," Krishnan said.

He added that PropertyGuru's loan brokerage function is in the process of reducing the physical paperwork typically required when borrowing from banks, in an effort to make the entire process digital.

Next, the CEO said his company intends to further add to its fintech offerings by exploring a partnership with a financial institution to offer home loans in PropertyGuru's name.

"We believe fintech when it comes to property is a very unaddressed space," Krishnan said. "It is not getting the same attention that payments and deposit accounts and e-wallets, etc., are doing."