COLOMBO -- Sri Lanka is on course to avert a balance of payments crisis this year, the country's central bank chief says, expressing confidence in the island nation's ability to secure aid from both China and India to repay looming debts.

The South Asian country intends to use its politically important location in bailout negotiations, Central Bank of Sri Lanka Gov. Indrajit Coomaraswamy told the Nikkei Asian Review in an interview on Jan. 24.

"We are right smack bang in the middle of the Maritime Silk Route, so we want to take advantage of that location to attract Chinese capital,"  Coomaraswamy said.

Pursuing aid talks with both countries requires Colombo to play a delicate balancing act, trying not to side with either Asian economic power as the rivalry between Beijing and New Delhi for influence in the Indian Ocean intensifies.

"It is in Sri Lanka's national interest to balance [when borrowing]," the governor said.

Sri Lanka began the year facing a record $5.9 billion in debt that must be repaid by the end of 2019. After attempts to raise funds from international bond market failed, the central bank repaid $1 billion in debt on Jan. 14 by dipping into foreign exchange reserves. But this payment reduced reserves to just $5.9 billion -- barely enough to cover about three months of imports.

Faced with a looming balance of payments crisis, Colombo has been negotiating with various parties. Some of the money is owed to China. The Chinese share of Sri Lanka's total external debt comes to 9%, according to the governor. A private-sector analyst estimated the figure at less than 15%. Taking part in China's Belt and Road Initiative, though not the sole reason, did add on more debt in recent years. Though debt totaling $4.9 billion remains to be paid this year, about $1.2 billion of that amount consists of "U.S.-dollar-denominated bonds issued domestically [that] are generally rolled over," Coomaraswamy said.

The government also expects another $1.5 billion of inflows from bilateral and multilateral projects and programs run by lenders such as the World Bank, the International Monetary Fund and the Japan International Cooperation Agency, he said.

This leaves a roughly $2 billion funding gap that the central bank chief is confident can be filled in time.

Coomaraswamy said Sri Lanka has already secured a $400 million currency swap facility from the Reserve Bank of India as well as a $300 million loan from Bank of China. The loan from the Chinese state-owned bank has a provision to increase it to $1 billion, according to the governor.

"We are also negotiating for $1 billion [via currency swap facility] from India," he added.

"We have also talked to People's Bank of China about another [currency] swap that's still at the early stage," he said. Talks started "about a month ago," and the size of the swap "could be up to $1 billion again."

Even after meeting this year's debt payments, Sri Lanka still faces a total of $15 billion in debt due by 2022. 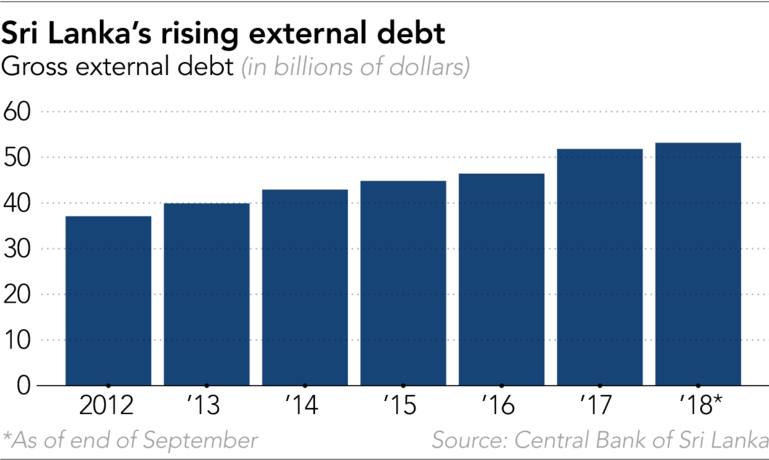 To meet these obligations, the country is conducting discussions with the IMF. Colombo will host a team from the international lender on Feb. 14 to review financial assistance frozen due to last year's political turmoil in the country. Reaching a deal with the IMF would "give confidence to markets" regarding Sri Lanka and pave the way for the country to resume raising funds in the international market, Coomaraswamy said.

Sri Lanka's cabinet recently approved a $2 billion issuance of sovereign bonds. The central bank governor said the bonds will be a combination of dollar-denominated debt worth $1.5 billion and $250 million each of yen-denominated and yuan-denominated bonds.

This will mark the island country's first sale of so-called samurai and panda bonds -- yen- and yuan-denominated debt from foreign issuers -- Coomaraswamy said, adding that "we shouldn't be too ambitious." President Maithripala Sirisena triggered a constitutional crisis by dismissing Prime Minister Ranil Wickremesinghe in his coalition government and replacing him with former president Mahinda Rajapaksa, who is politically popular but lacked a parliamentary majority. Much of the conflict between Sirisena and Wickremesinghe reportedly centers on a dispute over how much to accommodate Indian interests in the country versus Chinese.

The policy paralysis that lasted until Wickremesinghe was restored to office in December saw the Sri Lanka rupee tumble and the forex reserve drop by $1 billion.