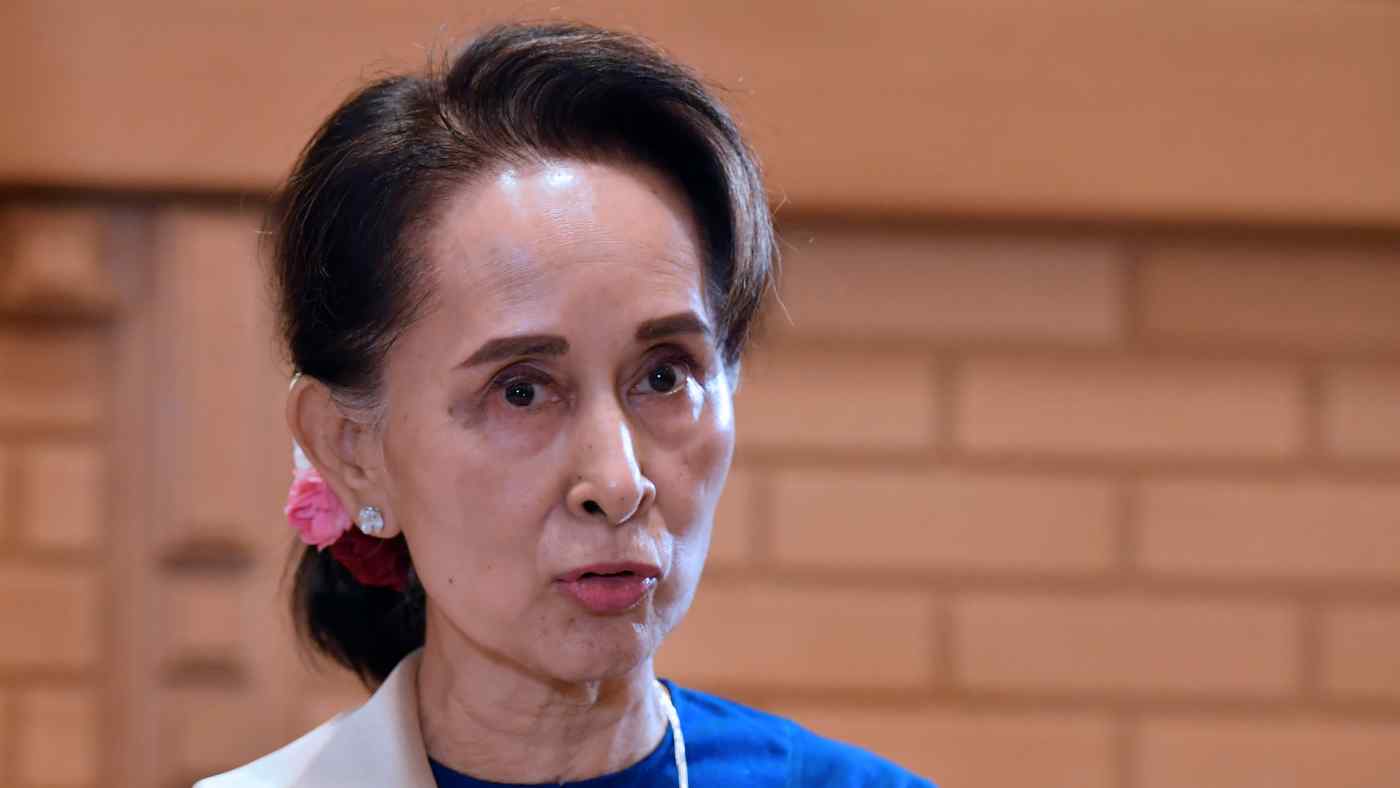 TOKYO -- Myanmar's State Counselor Aung San Suu Kyi said amending the constitution is needed for Myanmar to transition to a "complete democracy," but is unlikely to happen before next year's election.

In a 30-minute interview with the Nikkei Asian Review in Tokyo, where she was visiting to attend the enthronement of the Japanese emperor, Suu Kyi also said the crackdown against the Muslim minority group Rohingya was in response to a "terrorist attack."

"We are disappointed in the fact that the international community has paid very little attention to the terrorist element of the problems in Rakhine," she said, referring to Myanmar's southwestern state where most Rohingya reside. She added that "we understand their concerns about human rights."

Decadeslong military rule has resulted in long-standing conflicts in Myanmar. Suu Kyi, a Nobel Peace Prize laureate, led her ruling party National League for Democracy to a historic victory in the 2015 election and raised hopes for bringing peace and economic development to a country that is often dubbed Asia's last frontier.

In reality, the military still holds significant power, partly due to a clause in the constitution that guarantees 25% of seats in parliament are allotted to the military. Suu Kyi said amendments to the clause as well as other parts of the constitution are necessary to realize a "complete democracy."

The clause gives the military a virtual veto on amending the constitution, raising doubts over the chance of it being carried out. While the parliament formed a joint committee to discuss the constitutional amendments, Suu Kyi said the "military are not overly enthusiastic," and indicated that the issue will be addressed during her next term if she wins the 2020 election. "We are not building hopes for the next election on our ability to bring about constitutional amendments within the next year," she said.

Meanwhile, Suu Kyi has faced mounting criticism over her silence regarding the crackdown on the country's Rohingya by security forces in 2017, which sent more than 700,000 of the minority group fleeing to neighboring Bangladesh.

"It is not a religious issue as some people are trying to make it out to be. It is very much an economic and social issue," said Suu Kyi. She added that her administration had been aware of the instability in Rakhine since it assumed power in March 2016 and had appointed former U.N. Secretary-General Kofi Annan to oversee an advisory commission. The crackdown came right after his commission released its report.

"We are of the opinion that there are certain extremist elements who do not want peace in the Rakhine, who did not want a solution to the problems in Rakhine," she said.

Pressure from the international community has not abated. In July, the U.S. imposed sanctions on the Myanmar military Commander in Chief Min Aung Hlaing and other senior officers, accusing them of human rights violations against Rohingya. Asked whether a solution is necessary to extend business ties with the U.S. and Europe, Suu Kyi responded by saying that "we want to solve this problem not in order to advance business ties with any other countries but because it's necessary for the peace and stability of our country."

The backlash from the U.S. over the Rohingya situation has brought Myanmar's relations with China into focus. With a land area greater than Thailand and bordering China in the north, Myanmar is of strategic importance to Beijing's Belt and Road infrastructure initiative.

"Our country has maintained a very neutral and, in my opinion, very [common sense] foreign policy ever since we became independent," she said, adding that any investment should be "mutually beneficial."

A charismatic figure who has driven Myanmar's democratic movement for three decades, Suu Kyi will be 75 when the election is held next year. Questions have arisen over the lack of a clear successor, which is key to carrying out her policies in the future.

Her National League for Democracy party has "a very fixed hierarchy" that she hopes will "be maintained," Suu Kyi said, indicating that her successor may come from within NLD's senior leadership.

Asked whether she has plans to retire, she responded, "We always have several plans... You can't just depend on one plan for the future."