TOKYO -- Talent has replaced capital as the definitive factor for success, the founder of the World Economic Forum told the Nikkei Asian Review, as he stressed the need for the world to build new social and economic systems in the wake of the novel coronavirus pandemic.

"What we have to recognize is that entrepreneurship is actually the essence of capitalism today," said Klaus Schwab, the host of the annual meeting in Davos, Switzerland, in a recent video interview.

"Capital was the most important factor for success when capitalism was created. But today, it's not anymore," he said, when many central banks around the world are resorting to quantitative easing.

He emphasized it is "no longer appropriate" to call today's economic system capitalism but it is now rather based on "talentism," which has a particular emphasis on innovation. 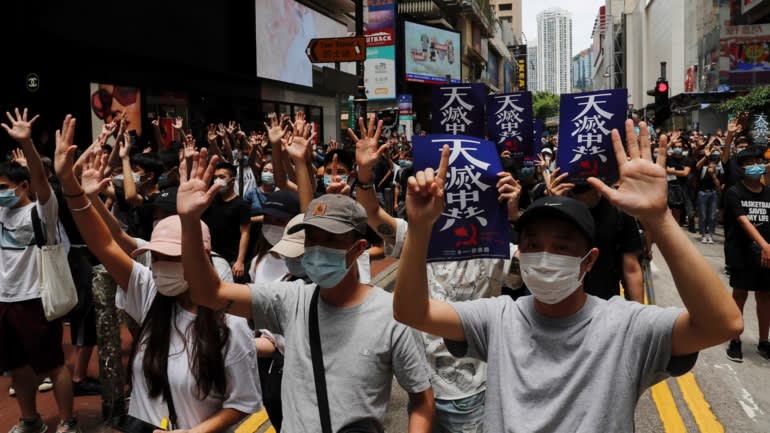 Anti-government demonstrators protest against national security legislation in Hong Kong, which lawmakers passed on May 28.   © Reuters

Placing capital before talent may only be one of many examples of what Schwab calls "outdated" systems of the post-World War II era, which has faced growing inequality, polarization of communities and environmental degradation in recent years.

Triggered by the damage caused by the pandemic on people's lives and economic activities, the 82-year-old now calls for the "Great Reset" initiative, which aims to reshape the global order in a new framework, instead of bringing it back to the pre-pandemic era. The Great Reset will be the theme for the next Davos meeting in January, which will be held physically and virtually connecting 400 cities around the world.

"The world needs to rethink its systems, because we have seen that our old system has led to unsustainable challenges and problems," Schwab said. "So in some way we need a new beginning... We want to find forward-looking solutions which are not cooking up old recipes for existing problems."

The need for a Great Reset is particularly urgent when millions of people have lost their jobs. According to a report by the International Labor Organization, more than one in six people aged 18-29 had stopped working since the onset of the pandemic, while those who remain employed had seen their working hours cut by 23%.

Governments across the world have spent massive amounts of money to deal with the economic fallout.

"What we are doing now, to a certain extent, is a betrayal of the next generation, because we solve our issues by adding more debt. And so that will have to be paid at the end by the future generations," said Schwab, adding that the redefinition of "social contract with intergenerational responsibility" is urgent.

"So we have to see how we can create a world which is more cohesive, more inclusive, provide jobs for tomorrow, and create the necessary infrastructure, particularly for the next generations," he said, adding that young people around the world will be one of key drivers of dialogue at the next annual meeting. 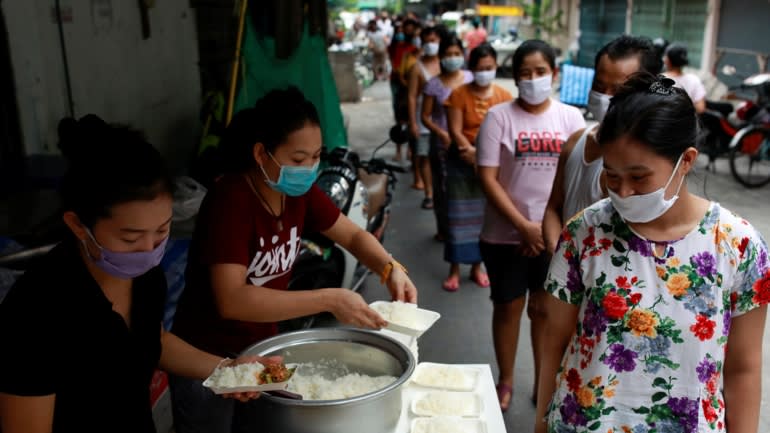 Volunteers in Myanmar on April 23 pass out free food to migrant workers forced to return from Bangkok due to the coronavirus pandemic.   © Reuters

As for the deepened concerns about the US-China conflicts, Schwab said it is not surprising to see the increase of tensions under the crisis. "The coronavirus has threatened us, as individuals but also as nations, and in such a situation it's a natural tendency to become much more egoistic or on the national mind to become much more nationalistic," he argued.

Schwab at the same time highlighted the WEF's growing importance as an impartial platform amid such a polarization.

One way of pushing the reset button is to put social progress at the center of economic development, instead of solely prioritizing growth.

"Integrating social needs such as health, education, security and much more into our, what you would call 'a capitalist system,' is an absolute need," said Schwab, who describes a "social market economy" as what would be needed, instead of liberal market economy. It is an economic system, based on free markets and innovation, but at the same time provides "necessary social services" like health, financial security and pensions to the people.

Indexes of environmental, social and governance, or ESG, should not only be implemented for companies but also for governments, Schwab said, as a way to measure people's well-being instead of relying on gross domestic product alone.

At its 50th meeting earlier this year, the WEF focused on capitalism that benefits all stakeholders, including customers, employees, suppliers, communities and shareholders.

The Geneva-based body also established the COVID Action Platform in March with the World Health Organization. It now has nearly 1,200 corporate and group members, with the aim of securing supply chains for medical supplies and mobilizing a cooperative response to the pandemic.