ISLAMABAD -- Defending the Taliban government's decision to end mixed-sex classes in Afghanistan, Abdul Baqi Haqqani, the minister for higher education, told Nikkei Asia that females will be allowed to resume their education after a new system to separate males and females is introduced.

The minister said that several committees have been set up to review administration, finance and other matters relating to education.

"We have formed a committee of religious scholars to chalk out a framework so the students can get an education in accordance with Islamic Sharia law," he said. "The education system should not clash with Islamic and Afghan customs."

Without giving a specific date, Haqqani said that the 39 state-run universities are expected to resume after the winter break with separate classes for men and women.

Universities in the colder parts of Afghanistan, including Kabul, the capital, and most northern regions, usually reopen in March after winter holidays that start in December. Those in eastern and southern regions resume by the end of January. Haqqani said that fewer people study in the mixed system, and that more female students will enroll once it ends.

The Taliban allowed girl students up to 6th grade, or 12 years of age, to learn at mosques and madrassas when it ruled the country previously until 2001, but studying separately from boy students. It announced a ban on co-education after it regained control of Kabul in August in the wake of a shambolic U.S. withdrawal.

Though he did not give names, Haqqani said a number of countries have promised financial aid to the Taliban for education.

"We are also collecting our own revenues," he said. "The situation is improving day by day. We paid salaries that were not paid by the Ashraf Ghani government. Foreign assistance is also coming in. I am hopeful a way forward will be found."

Haqqani dismissed reports of a Taliban ban on women's education as propaganda by "enemies." A Taliban political office in Qatar had also assured the world that women will have all the rights they are entitled to under Sharia law and according to Afghan custom, including the right to education.

"Every country has its own traditions," he said. "Afghanistan is an independent Islamic country, and people here have rendered sacrifices for Islam. The education system should also be in accordance with Sharia. The idea that the Taliban does not accept women's right to education is false." 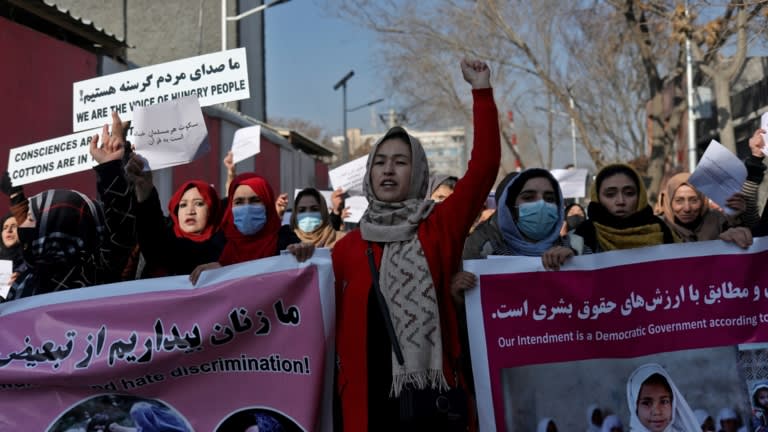 Haqqani said Sheikh Hibatullah, the Taliban's supreme leader, issued a special order for the protection of women's rights in December, and asked all ministries to address the issue.

"The U.S. and its allies have frozen all Afghanistan's funds, and we are empty handed," he said. "They left Afghanistan in such a state. The former government had not paid teacher salaries for three months."

The U.S. froze nearly $9.6 billion of Afghan funds overseas after the Taliban takeover.

"The first issue was a financial burden that we could not afford," said Haqqani. "The second issue was to create an Islamic environment and end mixed education." He said the new arrangements would include separate buildings and classes at different times for males and females.

"There is not a need for more buildings in major cities like Kabul and Jalalabad, but we do need them in some provinces," he said.

The minister said there are also now 150 private universities, and the Taliban government has allowed them to continue operating under certain conditions, one of which is separation of the sexes. He said, however, that they would be allowed to partition classes if separate buildings and staggered teaching times are not possible.