Country's tourism sector to shrink over 70% to $25bn this year: Dusit CEO "We've worked on this project for more than three years," Suphajee Suthumpan, Group CEO of Dusit Thani, told Nikkei Asia in an interview. "The hotel will open in 2023."

Several other projects are also in the works, in Thailand, India, Kuwait and Greece. "We push ourselves in the belief that even COVID can't stop us," she said.

Thailand has implemented measures to promote domestic travel to shore up its struggling 3 trillion baht ($99.5 billion) tourism sector, but the lack of foreign visitors has been crippling. "Foreign tourists accounted for about 2 trillion baht last year while 1 trillion came from domestic tourists," the CEO said. "This year, we'll probably pull in about 700 billion to 800 billion baht."

Dusit Thani's appetite for investment comes from Suphajee's conviction that global travel will eventually thrive again, despite her current bearish view amid the pandemic. "I think the travel industry will still remain. People, by nature, need to travel," she said. 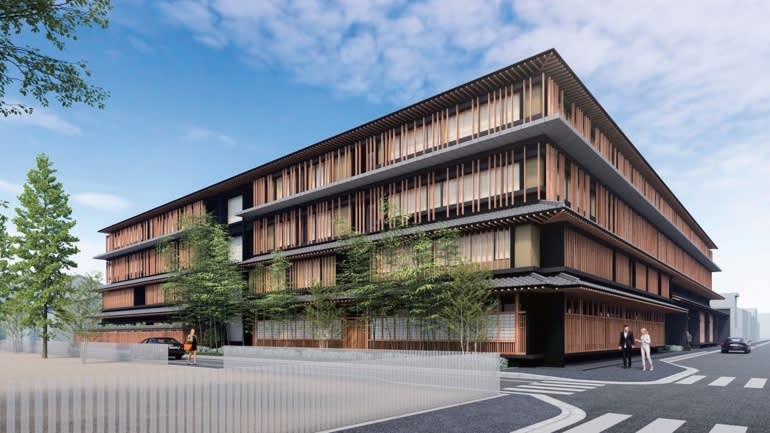 Dusit Thani will partner with Yasuda Real Estate to open its first hotel in Japan in 2023 in Kyoto. (Illustration courtesy of Dusit Thani)

Kyoto has a strict landscape ordinance to preserve the historical value of the city. "Because we are in the middle of the city between two big historical temples, we must make sure we comply [with] the local environment," said Suphajee.

The hotel in Kyoto will be the first Dusit Thani hotel in Japan, apart from villas it owns in the Hokkaido ski resort of Niseko. The group currently holds 339 properties across 14 countries. Of them, about 40 are hotels, mostly in Asia and the Middle East.

Suphajee joined the hospitality giant in 2016, becoming its third CEO the group's 70-plus-year existence. She is the first top executive from outside the founding family. Under her leadership, the group is doubling the number of hotel rooms and balancing the company's portfolio to generate half its hotel business outside Thailand.

"Obviously, because of COVID-19, we have to pull back on unnecessary investments," the CEO said. Yet, the hotel giant maintained a fairly aggressive posture. "We've already opened seven, and will have three more in the pipeline this year," she added.

The pandemic has forced the industry to spend more. "You probably need to use ozone and deep clean each room to ensure cleanliness. I'm not talking only in Thailand, but around the world," she said.

Damage from the pandemic is visible in Dusit Thani's results. On Monday, it announced a loss of 878 million baht in the first nine months in 2020, compared with a 51 million baht profit over the same period last year. Its hotel and food businesses suffered hugely, reporting 57.9% and 21.3% declines in revenue, respectively.

Meanwhile, the hotel group's debt-to-equity ratio increased to 2.4 times as of September from 1.8 times in December, reflecting its investments during the coronavirus turmoil.

Suphajee expects a gradual recovery. "In the second to the third quarter of next year, we will see people from Asia traveling again," she said. "But if you're talking about Europe or the Americas, I think it will take longer. It could be in 2022 or 2023."

A key to post-COVID success lies in technology, said Suphajee. Old ways of market segmentation using data such as gender, age and nationality will not suffice.

"I'm 56 years old with two kids. If you look at my profile, you'd probably think I'd want a spa treatment in hotels. But my preference is actually high-speed Wi-Fi," she said. "Our services have to be personalized." She suggested that big data analysis can play a big role in the hospitality industry.

One of the group's ongoing projects is Dusit Central Park. The joint project with retailer Central Group is being built on the site the hotel group had built its original flagship hotel in 1970.

Suphajee said the project, which had been originally scheduled for completion in 2023, could slip a bit. "Not because of COVID-19 per se," she said. The government asked her company to reduce construction hours to curtail the release of ultrafine particulates that foul the air.

The crisis has forced Dusit Thani to alter project requirements. Tile and wood are being used instead of carpet, as droplets from visitors could spread infections. In addition, the air-conditioning system had to be decentralized. But the changes came early enough so as not to severely impact the project, she said.