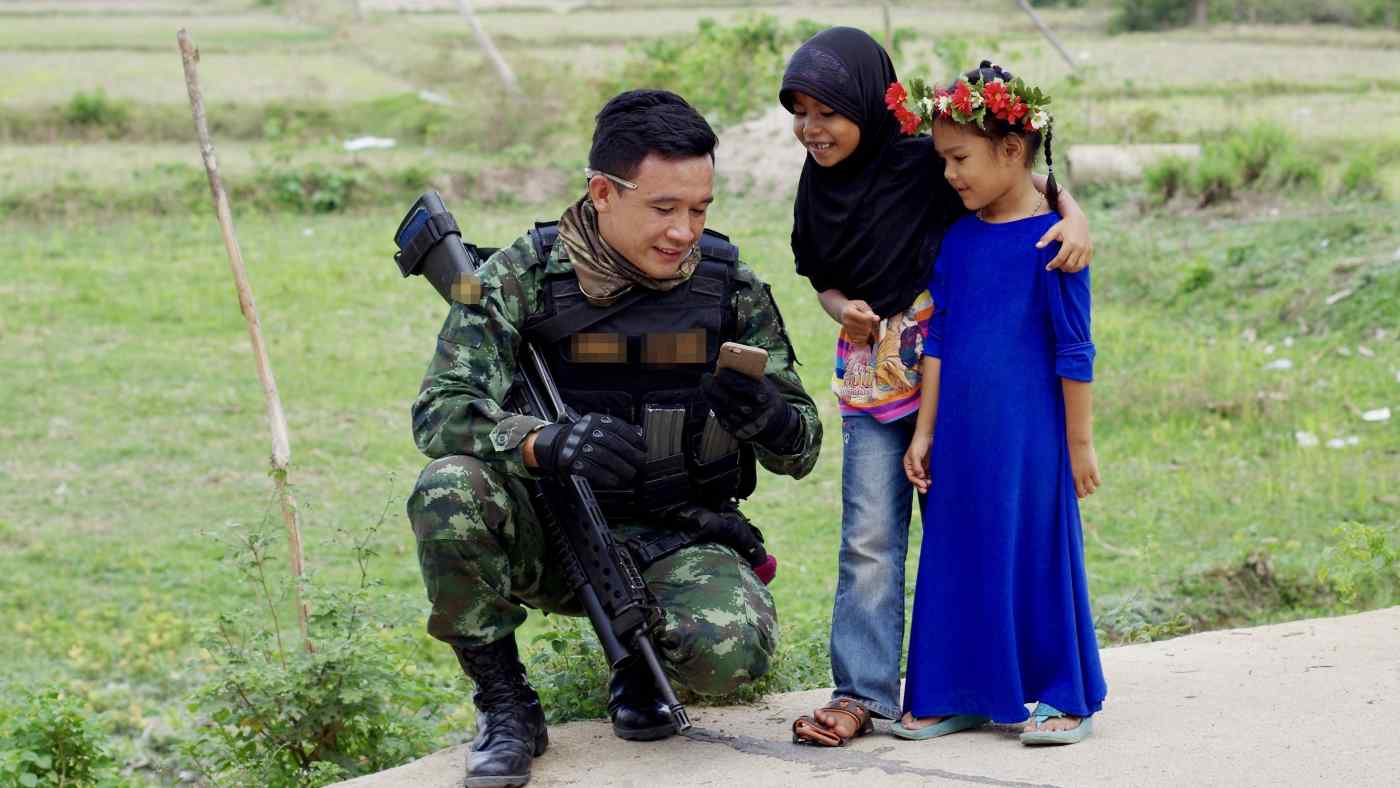 A soldier talks to children in a southernmost province of Thailand: A meeting in May will indicate how the peace process is going in the kingdom's Deep South, Muslim majority provinces. (Photo by Toyoaki Fujiwara; insignia blurred out)
MARWAAN MACAN-MARKAR, Asia regional correspondentMay 3, 2021 11:07 JST | Thailand
CopyCopied

BANGKOK -- The road to peace in Thailand's restive southern provinces bordering Malaysia takes a crucial turn in May when negotiators from both sides of the ethnic conflict resume discussions, bringing "substantive issues" to the table.

The lead peace negotiator of Barisan Revolusi Nasional, the largest rebel group, aims to air political concerns when he sits with counterparts from the Thai security establishment in the Malaysian capital, Kuala Lumpur, which has served as the venue for the talks.

"The next round will require substantive issues to be discussed for the first time," Anas Abdulrahman, BRN's chief peace envoy, told Nikkei Asia in an exclusive interview. Such discussion will differ from earlier rounds of "technical-level talks," Nikkei has learned.

"For a start, the Thai government can apply the values of democratization for the people [in the south]," the bespectacled Anas said, choosing his words carefully during a Zoom conference call from an undisclosed location in Southeast Asia. "The local people want to have greater control of their language, culture, economy and politics in the area."

Anas also flagged other areas his team is discussing ahead of the talks: political solutions, a cease-fire and the start of inclusive public consultations that involve residents of the violence-torn southernmost provinces of Pattani, Yala and Narathiwat -- home to the Malay Muslims, the largest minority in predominantly Buddhist Thailand.

"One thing we want ... is inclusivity, involving as many people" as possible in the peace process, said Anas, who is also known as "Hipni Mareh" among the BRN political high command and the military wing. But this wish list illustrates the diverging views that have shaped the negotiations, which involve Gen. Wanlop Rugsanaoh, Thailand's latest chief negotiator. Wanlop, regarded as a pragmatist, participated in the two rounds of full-fledged talks early last year that marked a new openness by the Thai government to recognize the BRN officially as its opposite number.

Sources in the Thai security establishment reflected on their "big disappointments" during one of the technical rounds that were held following the full-panel talks in order to keep discussions on track amid the coronavirus pandemic. At one round of technical talks, Bangkok was prepared to discuss curbing violence in the provinces with the BRN negotiators, but made little headway.

"The BRN team claimed that it was a technical team and they did not have a mandate to discuss this important issue, and that it should be discussed at the main panel meeting," a well-placed security source told Nikkei. "This was totally nonsense for us, and it seemed as if BRN did not want to get into any substantive agendas but only focus on protocol, logistics and procedural matters to buy time."

Not surprisingly, the prospect of bridging these diverging views has become the top factor in assessing the progress of the May talks.

"The fact that the talks will resume this year after [stalling] last year due to the coronavirus is significant progress itself," said an Asian diplomat familiar with the negotiations. "But the comfort level of both negotiators to talk should be assessed one step at a time ... on the issues such as cessation of hostilities, inclusivity and finding a political solution."

Yet even skeptics concede that the successive meetings between the two sides, with Malaysia as facilitator, offer hope for peace in a terrain torn by violence since early 2004. Deep South Watch, a local conflict-monitoring network, says the violence has accounted for 7,224 deaths and 13,427 injuries from 2004 to February 2021. Fatalities have ranged from Malay Muslims and Thai Buddhist civilians to Thai soldiers, police and rebel fighters.

Malay Muslims say they have been subject to injustice by the Thai state for decades, denied the official use of their language and made victims of political and economic marginalization. Cycles of separatist conflicts have occurred in the region before, involving other Malay Muslim rebel groups. But none match the BRN and its military wing, consisting largely of armed youth fighters, for ground operations and support.

BRN's presence at the negotiating table marked a milestone in the conflict resolution efforts, under which Thailand in 2013 sought Malaysia's help to facilitate the politically sensitive talks. Until negotiations with only BRN last year, Bangkok had held multiple rounds of talks with a motley mix of representatives of smaller Malay Muslim rebel groups, many of them political and military has-beens.

The groundbreaking presence of the BRN at the peace table in 2020 followed behind-the-scenes negotiations arranged by a European humanitarian group, including a meeting between BRN representatives and Thai security officials in Berlin in 2019.

But Thailand's official recognition of BRN as its dialogue partner has drawn flak from hawks in the country's powerful military and officials within the Foreign Ministry. They fear this will "internationalize" the conflict and attract foreign intervention, rather than maintain it as a domestic issue, government sources say.

The BRN, by contrast, has enjoyed the chance to establish some moral high ground by opening up to international engagement.

In January 2020, the group signed the Deed of Commitment for the Protection of Children from the Effects of Armed Conflict. The deed was established by Geneva Call, a humanitarian organization that engages with non-state armed groups as part of its advocacy for the rules of war.

Then in April, as COVID-19 emerged, the BRN announced a unilateral cease-fire to enable public health workers to deliver medical care in the Deep South.

These gestures do not ensure that the path to peace is on firm ground, seasoned security analysts caution.

"There is still no political will from both sides to go forward," said Don Pathan, a veteran analyst of the Malay Muslim insurgency. "Both the negotiating teams at the table have still not received authority from the powers above them to proceed."

He was alluding to Thailand's military and the prime minister's office for Wanlop, and the BRN's military wing for Anas.

"They are both stuck," Pathan said. "The May talks may end up with more confidence-building measures."