Penpa Tsering calls for US and other democratic forces to unite TOKYO -- The new leader of the Tibetan government-in-exile has lashed out at China, accusing it destroying Tibet's identity and calling on the U.S. and other democratic forces to unite to counter Beijing.

Penpa Tsering, 58, made the remarks in an online interview with Nikkei. He became the new president of the Tibetan government-in-exile, which is based in the northern Indian city of Dharamsala, in late May.

Chinese troops occupied Tibet in 1950 and later annexed it. The 1959 Tibetan uprising saw violent clashes between Tibetan residents and Chinese forces. The 14th Dalai Lama fled to neighboring India after the failed uprising against Chinese rule.

The Dalai Lama, the supreme Tibetan Buddhist leader, established a government-in-exile in India. There are at present more than 10,000 Tibetans living in Dharamsala alone, and an estimated 160,000 Tibetan exiles around the world. 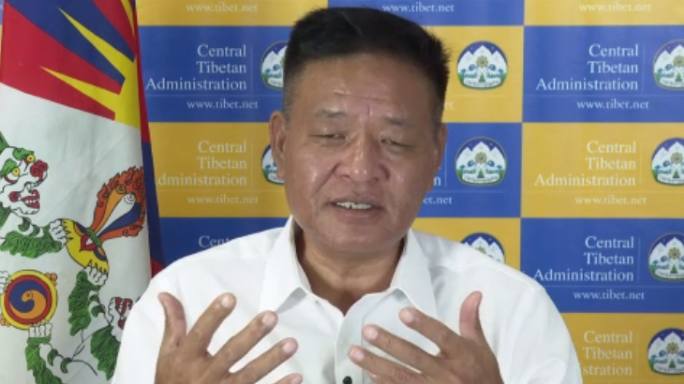 Penpa Tsering speaks about the situation in the Tibet Autonomous Region of China and Chinese President Xi Jinping’s policies in an online interview with Nikkei.

Tsering lamented the current situation in the Tibet Autonomous Region of China, saying, "More and more Chinese are moving into Tibet. The majority community is completely overwhelming our minority community and destroying its identity, amounting to a certain level of cultural genocide. That includes education, the importance of the Tibetan language, religious freedom, human rights."

He cited the installation of numerous surveillance cameras in Tibetan Buddhist monasteries, arguing that Tibetan Buddhists' freedom of religion is being violated. "There is lot of development, in terms of infrastructure, in terms of roads and railways or airports. A lot of connectivity is being increased through the region, also, as part of the Belt and Road initiative. But the whole issue is development for whom," he said.

The leader of the Tibetan government-in-exile leader also faulted Chinese President Xi Jinping's government. On the domestic political front, "China is the only country which spends more money on internal security than external security. All that money is put on repressive measures against the minorities," he said.

"With President Xi's policy of consolidating all the powers, and its treatment of the Uyghur people or the Hong Kong people is definitely a cause of concern for every one of us," Tsering added.

"We have to work with countries like the U.S., India, Japan, Australia and the EU, which cherish democracy and human values," he argued. Tsering hailed a joint statement from the leaders of the Group of Seven major industrialized countries at their summit in Cornwall, England, in June, which referred to human rights issues in China.

No dialogue has been held between the Tibetan government-in-exile and China since 2010. Beijing regards the Dalai Lama as a dangerous separatist and has sought to isolate him. Visitors take photos at the base of the Potala Palace in Tibet, near a large mural depicting current and former Chinese leaders. President Xi Jinping is shown at the bottom, in the center.   © AP

The Tibetan government-in-exile has set out a peace plan, which includes transforming the whole of Tibet into a zone of peace and respect for the Tibetan people's fundamental human rights.

A long-term solution to the problems in Tibet requires contact with Chinese leaders, Tsering said. "We are sincerely expressing, at every given opportunity, that we are willing and ready, and one step forward could be to invite His Holiness the Dalai Lama to China. He could go on a pilgrimage and meet with the Chinese leadership."

He also touched on the confrontation between India and China along their disputed Himalayan border. "Why does Chinese government want to build religious borders? So that is just to show their annoyance with the Indian government and the Indian government is taking notice of these strong belligerent Chinese moves. The sentiment in India is very strong," he said, adding that the recent military clash in the region is reminiscent of the 1962 border war between the two countries.

The 1962 war left more than 1,000 people dead on the Indian side alone. Clashes in the border region in June 2020 resulted in the first deaths there in 45 years.

According to Indian media reports, Prime Minister Narendra Modi called the Dalai Lama on July 6 to congratulate the spiritual leader on his 86th birthday. Modi's move appears aimed at sending a warning to China over Tibet.