TOKYO -- The race to attract global investors continues to intensify in Asia, with Tokyo and Seoul being the latest front line.

Seoul has recently been chosen as the regional hub by The New York Times and The Washington Post.

The two cities, along with Singapore and Hong Kong, compete for business, capital as well as talent. Seoul's emergence is a reminder that new competition always comes up in Asia, a region studded with "rising stars," according to Hiroshi Nakaso, former deputy chief of the Bank of Japan.

"A decade ago, people may have believed that South Koreans do not have the best command of English," said Nakaso, who now leads the Organization of Global Financial City Tokyo, a group that promotes the capital as global financial center. "That is an image of the past."

A major turning point for South Korea came when it hosted the Group of 20 summit in 2010. The South Korean government made globalization a top national priority and actively developed international talent. Today, South Koreans serving top international posts include Changyong Rhee, director of the Asia and Pacific Department at the International Monetary Fund, and Hyun-Song Shin, chief economist at the Bank for International Settlements.

Nakaso believes that Tokyo will become a cosmopolitan city like London or New York.

"Japan has changed a lot since the time I joined the BOJ in 1978," he said. "Central banking was a domestic business. I thought I would never have to use English then." Today, BOJ officials work together with fellow central bankers in the U.S. and Europe in English.

In the 1970s, most Japanese women quit their jobs after marriage. Today, more than 80% stay in the workforce. In 1978, the number of foreign workers was negligible. Today, it totaled 1.66 million, even though it still represents only 2.4% of the Japanese workforce.

"The number of foreign workers is going to increase further. That will be unavoidable in light of the economic structure of Japan," Nakaso said, apparently referring to the nation's aging population and the declining workforce. "Children today find it natural to have people with different backgrounds in their classroom."

"In the next 20-30 years, there will be even bigger changes over the way people work and the language they speak," Nakaso predicted. In the office, English would become the official language. "Tokyo will be a cosmopolitan city like London," he said.

Nakaso's organization was set up in 2019 to promote financial service investment in Tokyo. It is a brainchild of Tokyo Gov. Yuriko Koike and is aimed at strengthening Tokyo's standing as a financial center. The group will publish a new policy vision this year, a common set of goals both the public and private sectors will work toward. 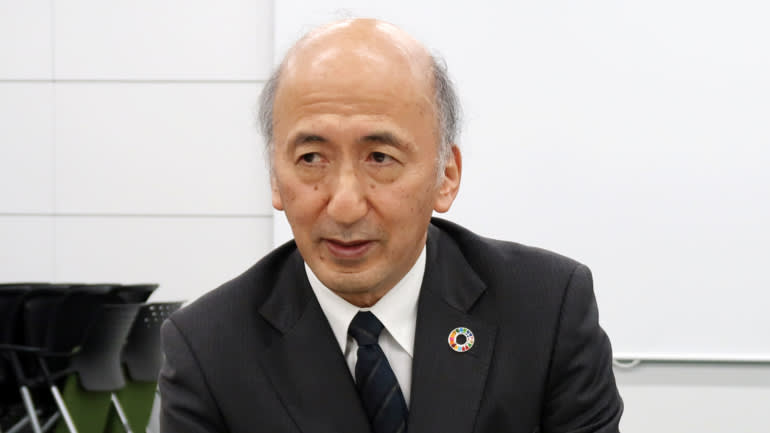 Some speculate that Tokyo will become an alternative destination to Hong Kong following the enactment of national security law in the territory and its loss of autonomy from Beijing. But Nakaso expects Tokyo's role to be more focused on Japan and its globalization, instead of assuming functions of Hong Kong or Singapore.

"Hong Kong's role as the gateway to China is unlikely to change. Singapore will remain the inter-regional steppingstone to Southeast Asia and India," Nakaso said.

The main feature of Japan is its large self-sustaining domestic economy centered on industrial innovation and technology, he said.

Tokyo's role will be to connect businesses looking to undertake the digital and sustainable transformation of Japan with investors around the world, and achieve the most efficient allocation of capital along the way, he said. "This is a different function from that of Hong Kong or Singapore." He predicts more interdependency between Tokyo, Hong Kong and Singapore. "These cities are complementary to each other."

Part of the reason for this complementarity is the sheer size of Asia.

"Asia is the world's most dynamic economic zone with potential to grow," he said. It is not just China. "Emerging economies with a balanced demographic structure are waiting in the wings, including Indonesia and Vietnam. It has a deep bench of rising stars."

One thing the Tokyo financial market can offer is to provide opportunities for Asian startups to raise capital through stock market listing in Tokyo and use it as "a steppingstone to reach an even bigger global stage -- New York and London," Nakaso said. He hopes that the Tokyo Stock Exchange's so-called growth section, to be created out of the existing Jasdaq and Mothers markets next year, will serve that function.

Another mission for Tokyo would be to help develop alternative supply chains to the existing ones in China, he said. Japanese banks should be able to help manufacturers develop new supply chains to cope with the U.S.-China trade tensions.

Tokyo already serves a regional function for the Asian financial markets. When a crisis hits, the BOJ supplies dollars to the Asia markets to make sure there will be no liquidity crunch. This is made possible through currency swap lines between the BOJ and the U.S. Federal Reserve. Dollars are supplied to businesses across Asia, including Japanese, American and Asian, typically through Japanese mega banks.

Natural disasters are another risk for Asia, as Japan marks the 10th anniversary of the 2011 earthquake and tsunami, which killed more than 15,000 people.

"Japan is a quake-prone country," Nakaso said, adding that financial institutions, including the BOJ, have developed business contingency plans, including maintaining backup locations outside Tokyo. Many buildings are built with technology to absorb the shocks of an earthquake or isolate the building from the shocks, he said. "Tokyo has improved its resilience to natural disasters."