As relations with the West suffer, Chinese initiative is more enticing ISTANBUL -- The Turkey Wealth Fund is looking to China for investment in a number of major infrastructure projects, according to CEO Zafer Sonmez.

TWF was established in 2016 as the national sovereign wealth fund and is chaired by President Recep Tayyip Erdogan. As of the end of 2018, it had $223 billion in assets, including $33 billion in equity. The fund is looking for foreign and local partners, and aims to hit $100 billion in equity value by 2023.

Sonmez told the Nikkei Asian Review of plans to tie Turkey into China's Belt and Road Initiative much more deeply by "creating platforms and institutions that can team up with Chinese institutions." In his view, Turkey is "unfortunately lagging behind" on the Chinese initiative when it could be a key player.

Foreign investors in Turkish infrastructure have hitherto been mainly European as well as some Japanese and South Korean, but China has got its toe in the door in recent years.

Cosco Group and China Merchants Group jointly invested nearly $1 billion in an Istanbul container terminal in 2015. Shanghai Electric Power, a subsidiary of China's State Power Investment Corporation, is meanwhile investing $2.1 billion in a 1300 megawatt coal-fired power plant in Adana, along with other Chinese and Turkish partners.

In December, Chinese investors agreed to acquire a 51% stake in the third bridge spanning the Bosphorus for $688 million. Turkey has also been in talks with China on nuclear power and high-speed railway systems. The Yavuz Sultan Selim bridge, the third span across the Bosphorus linking the European and Asian sides of Istanbul.    © Reuters

To speed matters up, TWF signed a memorandum of understanding with China Export and Credit Insurance Corporation in March that could provide up to $5 billion in insurance support. Energy, petrochemical and mining projects are slated as the main beneficiaries.

According to Sonmez, TWF will call for engineering, procurement and construction tender this year for a coal-fired power plant in the southeastern Afsin-Elbistan area with roughly a 1600MW capacity. He said the plan is to break ground in the first half of 2021, and that six Chinese companies have shown interest.

"We are focusing on the Chinese because they offer cost advantages and we have to be cost-efficient," he told Nikkei, adding: "We are not closing our doors to others." Turkey has been struggling to exploit its lignite deposits for years, and previously there was some Japanese interest in developing their potential.

TWF is also conducting a feasibility study for a $10 billion petrochemical plant in Adana. 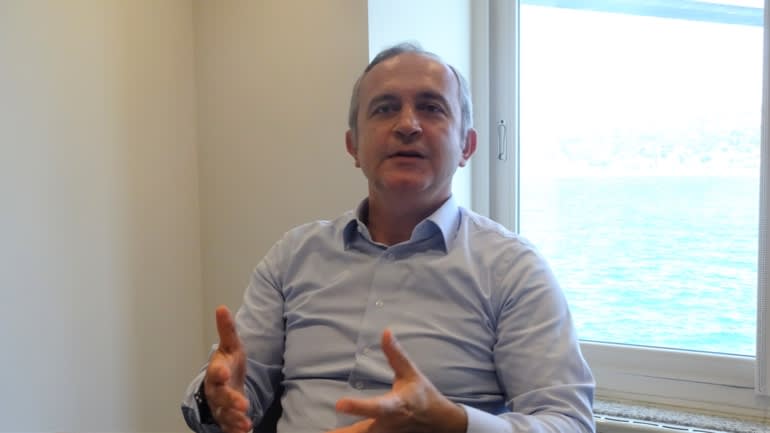 As bilateral ties with China improve, relations with the West have slipped. A diplomatic spat with the U.S. in 2018 caused the currency to plummet, and membership of the European Union is looking increasingly like a moon shot.

Sonmez became TWF's chief executive two years ago after a six-year stint with Khazanah Nasional Berhad, Malaysia's sovereign wealth fund. "I am a true believer in Asian growth," he said, describing Singapore's Temasek and Malaysia's Khazanah as models for TWF and "J-curve growth."

Turkey lacks oil and gas wealth like Saudi Arabia, Norway or Qatar to build up its wealth fund. Sonmez believes TWF should look to Asia and go the asset-backed route, leverage valuable assets under its umbrella to create further value and profit.

TWF already has 49% of Turkish Airlines stake in its portfolio. Sonmez acknowledges that due to the COVID-19 pandemic the "company may suffer for one to two years," but beyond that, it should not be a problem. "Turkish Airlines will pick up the ones that suffer in the industry," he said.

Sonmez dismissed criticism from opposition parties that TWF will become a "parallel treasury" for government borrowing. So far, the fund has only received 1 billion euros by a syndicated loan. Industrial Commercial Bank of China was the lead book runner, and Japan's Sumitomo Mitsui Banking Corporation has also participated in the syndicated loan deal for TWF. As the current cash flow is generated by items like the national lottery and horse racing licenses, the fund is mulling further financing options such as issuing Eurobonds.