Ahead of COP26, Longbottom says climate talks at 'point of greatest pressure' TOKYO -- A month before the opening of the COP26 climate summit in Scotland, the U.K.'s ambassador to Tokyo called on Japan to accelerate the phase out of coal power and ban the sale of new petrol and hybrid cars by 2030.

"We hope that Japan will not only end the domestic use of coal, but also find a way to pull out of or find alternatives to remaining coal projects it is financing in Indonesia and Bangladesh," Julia Longbottom told Nikkei Asia in an interview on Friday. "We believe those countries want to shift to forms of energy that are better for their environment and their people."

Longbottom said that Japan and other developed countries still have time to upgrade their emissions reduction targets and commitments for climate financing, as well as gradually ending the use of coal.

"The commitments that Japan made, for example, to end new unabated overseas coal financing helped to encourage the Chinese and others to make similar commitments," she said.

Japan, which has been slower to pivot away from coal than Europe and the U.S., now faces the task of finding new energy sources for a domestic power industry already grappling with tight supply.

Japan has roughly 150 coal-fired facilities nationwide. Among those operated by a major utility, just two met the threshold efficiency rate of 43%, according to the economy ministry. In August, Japanese utility JERA sold off its entire stake in an operator of coal-fired power plants in Indonesia, joining a host of Japanese companies divesting from coal.

Longbottom, 58, arrived for her third posting to Tokyo in March. Previously deputy head of mission in Tokyo and head of the foreign office's China department, she has seen Japan evolve as an interlocutor on climate issues, culminating in outgoing Prime Minister Yoshihide Suga's commitment to become carbon neutral by 2050.

Japan's current stated target for emissions reduction is 46% by 2030, but has yet to update its nationally determined contribution for COP26.

"This is the point of greatest pressure where we will continue to push countries around the world," Longbottom said of COP26. "If you don't use these events as a forcing moment," she added, "there's no point in holding meetings like this." 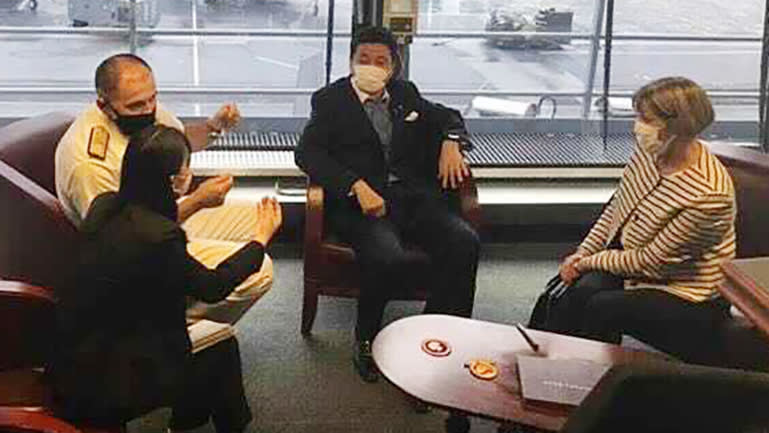 In its integrated review on security and foreign policy outlined in March, Britain said partners like Japan will be key to its "tilt" to the Indo-Pacific. The strategy did not call for more forward operating bases aside from existing facilities in Singapore, Oman and the Indian Ocean, but negotiations on a reciprocal access agreement with Japan will begin on Thursday.

"We've had a real step-up in the closeness of our defense and security relationship, Longbottom said. The U.K. last month sent a carrier strike group, including the aircraft carrier HMS Queen Elizabeth, to conduct joint exercises with Japan's Self-Defense Forces.

A future combat air system interoperable with Japan and the U.S. was discussed two weeks ago, when Jeremy Quin, the U.K.'s minister for defense procurement, met in Tokyo with Japanese Defense Minister Nobuo Kishi.

"Defense exports are much more than just selling something to another party. They're a very important binding mechanism for security partners to be able to work more effectively together," Longbottom said. "With Japan, it's not just about defense exports, it's also about joint development of defense technology."

The Indo-Pacific "tilt" strategy calls for more defense exports as well as closer trade ties with the region, namely through the Comprehensive and Progressive Agreement for Trans-Pacific Partnership. Japan as this year's chair of CPTPP will oversee the U.K.'s application, as well as China and Taiwan's rival bids to join.

The U.K. itself has dealt with the question of shoring up national champions for critical components while cooperating on global supply chain resilience, as seen in the resistance from the European Union and others to SoftBank's planned sale of British chip designer Arm to U.S. chipmaker Nvidia.

"The challenge is to strike the right balance between openness and regulation," said Longbottom. "The integrated review talked a lot about the U.K.'s strong belief in openness...but it also recognized that increasingly, we need to do more to secure the interests that we have, in order to be able to maintain that openness."

"The immediate priority is to increase transparency in order to avoid panic or exaggerated reactions by firms when markets suddenly appear under pressure," Longbottom added. "In the longer term, we think that there is scope to promote bonafide cross border investments as well as collaborative R&D between firms in friendly countries."

"They've had really good opportunities in our very open economy to develop their knowhow," said Longbottom. "I believe there's a really big opportunity for a lot of that know-how and partnership to be brought back to Japan."

"Japan has so much potential as a technology superpower to contribute to the transition," she added.