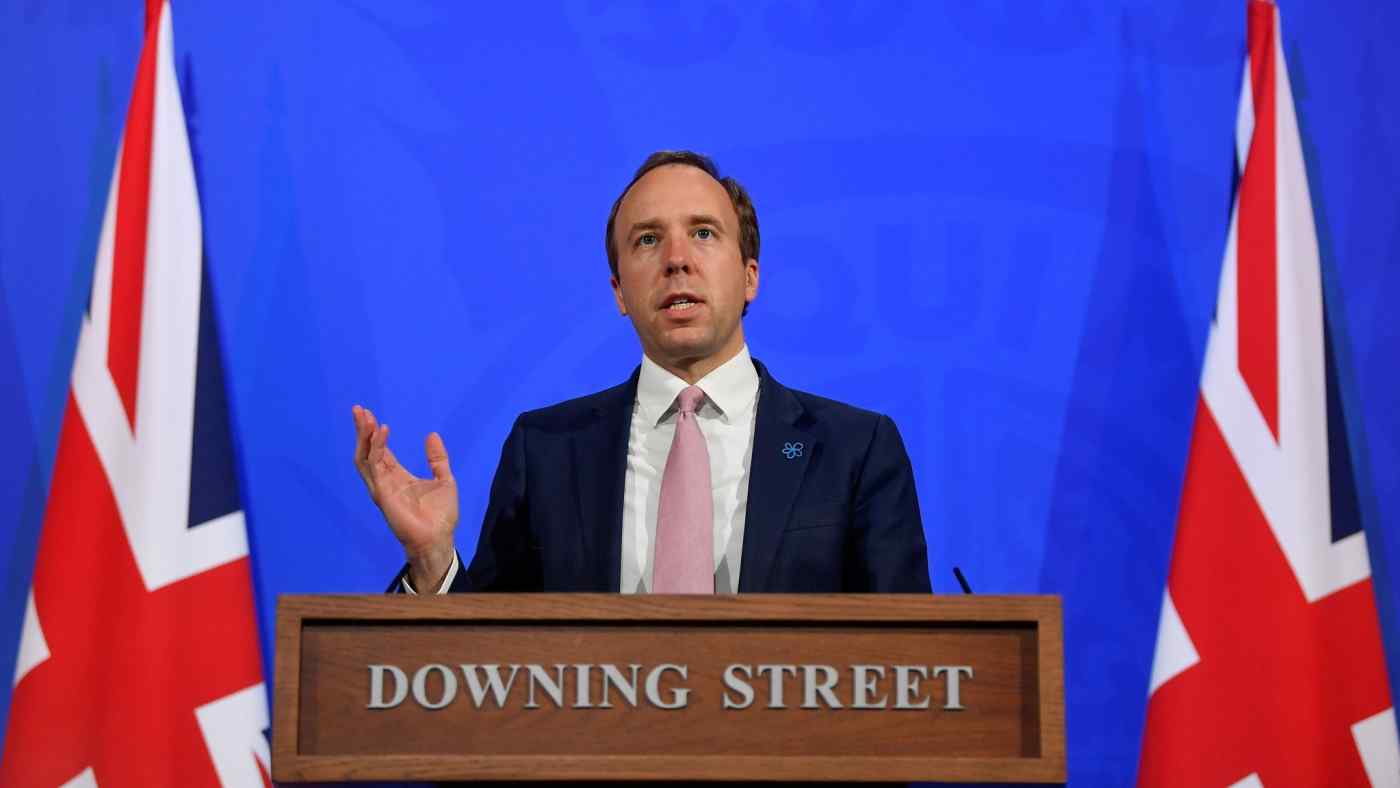 Matt Hancock, the secretary of state for health, will propose that approach when health ministers from Group of Seven nations meet in the U.K. next week. This gathering will inform the debate at the G-7 leaders summit to be held in the country June 11-13.

Hancock, who this week faced allegations that he lied about the COVID-19 response at government meetings, said it is "difficult to know" when the crisis will end.

"I have learned that the making of precise predictions does not always work well in a pandemic," he said. Yet "it's in all of our interests to collaborate to ensure that vaccines can be made as widely available as possible, as quickly as possible."

"If the way that the trials are organized is agreed to in advance, with a set of common standards, then the data from within those trials can be combined rather than be seen separately," Hancock said of his proposal.

If countries combine data from individual clinical trials, "you can get a readout earlier and you can have a more powerful result," he said. If the trials are carried out in a standardized manner, "we'll be able to get medicines to market faster."

The health ministers meet face to face June 3-4 at the University of Oxford. Hancock thinks no G-7 country will object to deeper cooperation on clinical trials. But Japan's health ministry requires that trials use data from Japanese subjects, and it remains unclear whether sharing data across borders will accelerate rollouts.

The World Health Organization's system for flu vaccines collects data from about 110 nations and territories for the purpose of developing formulas against anticipated variants. For COVID-19, some nations have experienced dramatic declines in cases after rolling out vaccines, and Hancock said the G-7 should create a similar international setup to develop inoculations against unknown coronavirus variants that can break through existing shots.

G-7 nations also will discuss clinical trials for treatments designed to combat viruses. The U.K. plans to propose an initiative that would shorten the time from development to commercialization for both drugs and vaccines.

"We recognize that some countries are pushing for changes to rules around intellectual property," the secretary said. "The U.K. approach is to make vaccines available at cost everywhere as fast as possible."

India and South Africa are to participate virtually in the health ministers summit as guest nations. The two countries will urge G-7 members to suspend vaccine patents to resolve the shortage of supplies.

European Union countries and pharmaceutical companies maintain that waiving intellectual property rights will not boost vaccine supplies. Instead, they insist that solving the shortage of raw materials and lifting export restrictions should take priority. China supports suspending patents, indicating the intense horse trading around the issue that could complicate the health ministers meeting.

The U.K. has moved to procure vaccines independently of the EU, and the country has administered at least one shot to over 70% of adults. But critics decry the insufficient vaccine support for developing nations.

"We have already delivered 450 million doses [of the AstraZeneca vaccine] to the world at cost, of which two-thirds are in lower- and middle-income countries," Hancock said. Unlike China's vaccine offerings, the U.K.'s approach has translated to "a much bigger contribution than the donation of individual doses."