NEW YORK -- With more people receiving vaccines for the coronavirus every day in developed countries, Delta Air Lines CEO Ed Bastian is hopeful the aviation industry has finally cleared the heaviest turbulence caused by the more-than-yearlong pandemic that has closed borders and grounded flights.

In a recent interview with Nikkei at Delta's headquarters in Atlanta, Bastian said travel demand was recovering quickly at least at home, and that the U.S. travel industry could rebound by summer.

But not all travel is expected to return so quickly. Routes to Asia in particular will likely be the "last part of our international business that returns," he said, citing the region's setbacks in vaccination efforts, as well as the distance and costs associated with trans-Pacific flights.

The executive also touched on the importance of curbing the aviation industry's environmental effect, as well as the challenges American businesses face in navigating political topics like the new controversial voting law in Georgia, Delta's home state. Edited excerpts from the interview follow.

Q: The coronavirus pandemic shook the travel industry. What effect do you think this had on the world, and what do you think will be the key for the industry's recovery?

A: I think people took for granted the opportunity to travel as freely around the world as the industry enabled, and the pandemic shut that down. As a result of that, I think everyone felt disconnected from the world, from their friends, from their families, from the adventure.

Our U.S. domestic bookings are almost closely back to where they were pre-pandemic already. I've been surprised how quickly the business -- not "business travel," but "leisure and consumers" -- have come back to travel, once they felt comfortable that they're at no risk to the virus.

I believe the recovery will be in direct relationship to our ability to conquer the virus. So as vaccinations in our country, in the U.S., continue to grow -- and currently half of all U.S. adults 16 and above that are eligible for the vaccine have received the vaccine, and that number grows every day -- going forward, I expect by the summer that the U.S. travel industry will see a significant rebound. 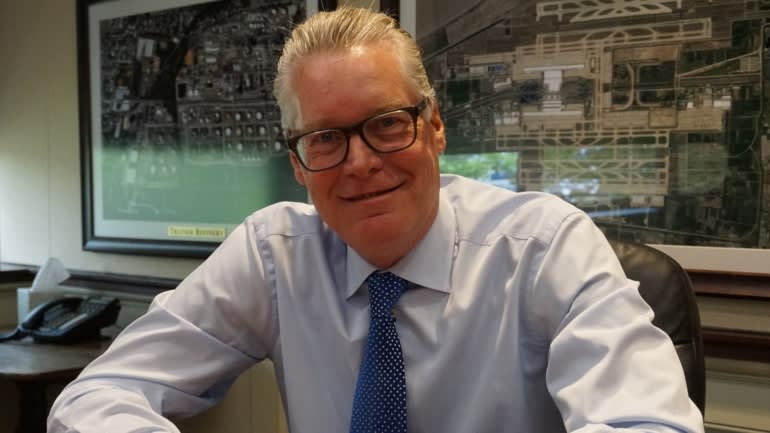 Delta CEO Ed Bastian says Asia will be the last part of the airline's international business that returns. (Photo by Yumiko Oshima)

Q: According to the financial results so far, Delta is likely to return to profitability in the July-September quarter.

A: That is our hope.

Q: What do you see as some potential obstacles toward a lasting recovery?

A: The international part of our business is still going to lag, and I see that taking up to maybe a year before we see international volumes returning at some scale.

I think you will see some international improvements this summer for very specific markets, maybe U.S. travelers going to Greece. Greece wants to open. Or certain local markets for vaccinated U.S. travelers. But, until you get all of the international travel back in both directions, the U.S. to the world and the world to the U.S., we're still going to be in a reduced state of overall activity.

Corporate demand right now is only about 20%. I think that number is going to grow gradually through the summer, and hopefully by the fall will really start to improve.

Q: What is your outlook on travel between the U.S. and Asia?

A: I think that Asia will be the last part of our international business that returns.

Many of the countries in Asia did a very good job through the pandemic of managing -- not having the exposure to the virus as much as we had here in the U.S. But because of that, now they actually have a much larger challenge ahead of them to get everybody vaccinated before they let any foreigners into their borders.

Because of distance, Asia is also the most expensive of places to serve. So, the U.S. carriers will not be able to afford to fly to Asia until we're confident that there is strong business as well as leisure demand for those routes.

We're talking to all the authorities around the world about the steps we need to take to reopen borders.

But I think every country around the world is asking themselves the same questions as to needing to have confidence that the virus is under containment, before they open their borders.

Q: Have you made any meaningful progress in negotiating with local authorities to resume Asian routes?

Q: International spectators will not be allowed at the Tokyo Olympic Games this summer. Do you expect this to impact revenue?

A: It is unfortunate that COVID-19 has impacted the Tokyo Olympics. However, we've long anticipated that trans-Pacific routes will be among the last to fully recover, and the Olympics do not change that forecast.

Q: What are some lessons that Delta has learned from the pandemic?

A: There is a lot that we can learn about health and wellness and the resilience and the cleanliness of the air travel experience that we'll take forward and we'll retain.

We thought the blocking of the middle seat was very important for our customers' well-being on the aircraft. They appreciated the extra distance, the extra space it provided. But that was only one step.

And, while we may have been blocking our middle seats, we actually generated just as much revenue on fewer seats as our competitors did. So, customers rewarded us with a premium because Delta was their airline of choice.

We'll be a different airline in the future, that we will have learned from the pandemic. And I think it will make us a better airline for customers.

Q: How will you balance environmental concerns and your push for recovery?

A: The environmental risks and the planet's risks are the same. The pandemic has shown us the vulnerabilities we have to the world at large.

The investments that we're making in being a carbon-neutral airline are critical to our ability to continue to serve the world, because if we're seen as nothing but a taker from the resources of the planet, we're not reinvesting back into the health of the planet, our business won't have the same potential to grow.

The only way that the airline industry in the U.S. can actually afford to invest in cleaner energy supply is the government providing commercial opportunities for investment in cleaner technologies. And we're working closely with many large energy producers to understand what level of investment they're making, what level the government can provide, so that the airlines can afford to invest in clean energy supply.

Q: The U.S. government has provided significant financial relief to airlines during the pandemic. Do you think all the existing airlines will be able to survive?

A: The U.S. people need to travel, for lots of reasons -- for health reasons, for supply, for emergency factors. And if the U.S. government wasn't able to give us the support we needed, we would have had to dismantle the U.S. travel -- the aviation, industry -- and many, many people would have lost their jobs.

So, I think the U.S. government did the right thing by supporting the airlines.

In the U.S., the airline industry will be largely the same as it was pre-pandemic, because the U.S. government invested significant funds in the CARES Act to keep the airlines afloat. Internationally, I think you'll see some changes. There are many airlines that are going through restructuring. There are recapitalizations, liquidations, bankruptcies.

Q: Delta recently faced backlash for not immediately speaking out against Georgia's new voting law, which critics say restricts access to the polls. How do you think U.S. companies should deal with political topics?

A: As a U.S. company, it's always uncomfortable getting involved in political matters. What we see is bipartisan solutions.

And that's our hope, is that we will find a bipartisan approach toward resolving the issues we have today.