TOKYO -- Uniqlo will not take sides in the simmering tensions between the U.S. and China, says the CEO of the Japanese casualwear chain's operator, Fast Retailing.

"The U.S. approach is to force companies to show their allegiance. I wanted to show that I won't play that game," Tadashi Yanai told Nikkei recently.

Yanai also notes that behind the war of words between the two global powers, U.S.-Chinese economic ties are actually in very good shape, with solid capital and trade flows.

Q: What is your take on U.S.-China tensions?

A: Look at the reality. The U.S. and China may appear to be at odds, but they actually are not. American financial capital is flowing into Chinese investments. Apple products are all made in China. Chinese exports to the U.S. have been rising. Economically, things are going well between the U.S. and China.

We need to understand why the U.S. is doing what it is doing. There was a time when America looked at Japan in the same way it looks at China today. Imported Japanese cars were destroyed with hammers. Toyota Motor was summoned to Congress over its handling of a recall under the presumption of guilt. The U.S. has such tendencies [toward potential rivals].

Q: You've declined to comment on whether your company uses cotton from Xinjiang amid allegations about China's treatment of its Uyghur population. Are you concerned about a Chinese boycott?

A: That's not it. I want to be neutral between the U.S. and China. The U.S. approach is to force companies to show their allegiance. I wanted to show that I won't play that game. 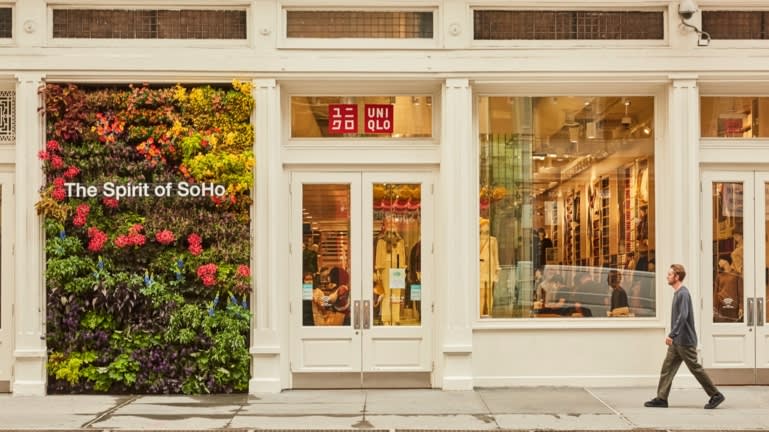 Q: Even so, you've been focused on growing your U.S. business.

A: That's because the U.S. market has a lot of growth potential. In 1995, American and Japanese consumers each spent around 16 trillion yen ($140 billion at current rates) on apparel, and Japan's total was higher. Now, the U.S. spends around 40 trillion to 50 trillion yen, while Japan is down to less than 9 trillion yen.

Q: What advice do you have for Japanese companies caught between the U.S. and China?

A: They need to acknowledge that Japan has nothing. Japan has no choice but to make money in markets across the world. It needs to attract global talent and send Japanese employees abroad. Japan can't survive without being an open country.

Japan has closed itself off due to the coronavirus, and it's been difficult for high-skilled tech-talent to enter the country. If the population keeps aging and Japan has little to export, Japanese people could start heading abroad to earn money and send remittances. What's left in Japan would be a country full of elderly people.

Q: Why has Japan been in such a long slump?

A: The country is no longer hungry. People still believe there is a steady career track in the country, although in reality there is no job that is steady anymore.

In the future, all business sectors are going to become information and service industries. We need to use digital technology to efficiently earn money worldwide.

I want small and midsize companies to energize themselves. Small businesses in Japan are too heavily protected. The government should take measures so that small businesses can stand on their own feet, not shielded by regulations.