Uzbekistan plans over $6bn in joint projects with Japan

MOSCOW -- Uzbekistan plans carry out joint projects with Japan worth more than $6 billion to foster bilateral cooperation in areas such as power generation and agriculture, President Shavkat Mirziyoyev said recently in a written interview with the Nikkei Asian Review.

Mirziyoyev, 62, unveiled the plan ahead of his visit to Japan starting Tuesday, his first since taking office. He is due to hold talks with Prime Minister Shinzo Abe in Tokyo on Thursday.

The president stressed that the former Soviet republic in Central Asia will accelerate its economic and democratic reforms and seek to join the World Trade Organization at an early date.

After the death of Islam Karimov -- the country's first president and longtime leader -- Mirziyoyev won a landslide victory in the December 2016 presidential election.

Uzbekistan, with 32 million people, has the largest population in Central Asia. It is also rich in uranium and other minerals.

China regards Uzbekistan as a key link in its Belt and Road Initiative, which calls for the creation of a massive economic zone connecting China to Europe by land and sea. That has spurred Chinese investment in Uzbekistan, and infrastructure projects led by Chinese companies are proceeding apace. 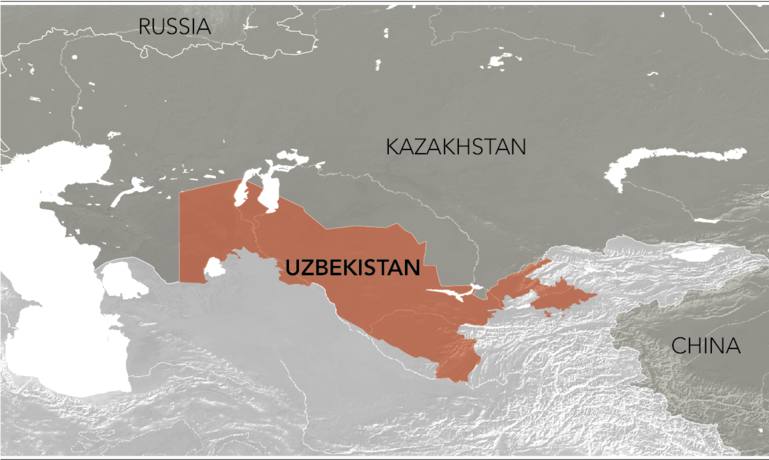 Mineral-rich Uzbekistan, with 32 million people, is the most populous of the former Soviet republics in Central Asia.

Japan and the U.S. are alarmed by China's growing influence in Central Asia. The issue is likely to loom in the background during Mirziyoyev's talks with Abe.

In the interview, Mirziyoyev said that the agreements he expects to reach with Abe will mark "a starting point for developing bilateral relations." Mirziyoyev will also be looking for new economic cooperation projects.

As part of the planned $6 billion in investments, Mirziyoyev cited a project to install new gas turbines at the Navoi thermal power station in southern Uzbekistan. An official yen loan agreement was signed in 2013 between the Uzbek government and the Japan International Cooperation Agency to modernize the power plant. Mirziyoyev revealed that Japan's Mitsubishi Hitachi Power Systems is likely to win a contract for the approximately $2 billion gas turbine project.

He added that Uzbekistan is looking for Japanese assistance in modernizing its agriculture.

Mirziyoyev pointed out that economic relations with Japan have also improved in areas such as oil, gas, petrochemicals and tourism, and expressed a desire to strengthen the two countries' "long-term strategic partnership."

He noted that Uzbekistan has abundant mineral resources, with its gold, uranium and copper reserves each among the world's 10 largest, and called for increased cooperation between Uzbekistan and Japan in their development. Advanced Japanese technologies will lead to production of high value-added goods in Uzbekistan, Mirziyoyev said.

Uzbekistan's most urgent and important policy goal is to be admitted to the WTO, he said, adding that the country "embarked on comprehensive reforms in 2017." Mirziyoyev spoke of the progress Uzbekistan has made in opening the economy to the outside world, including "the liberalization of foreign exchange transactions." He said that foreign investment is expected to triple from a year earlier to $7 billion in 2019.

On the political front, Mirziyoyev is working to correct the policies of the Karimov administration, which critics called authoritarian. He said his administration is focused on cracking down on corruption and prioritizing the protection of human rights.

A parliamentary election is scheduled for the first time under the Mirziyoyev administration on Dec. 22. The Uzbek president described the election as "the first step for Uzbekistan to join the ranks of advanced democracies."

Regarding Uzbekistan's diplomacy, Mirziyoyev said the country will prioritize relations with the other Central Asian countries and step up "mutually beneficial partnerships" with Russia, the U.S., China and others.

Uzbekistan is less developed economically than its neighbor Kazakhstan and Russia. According to the International Monetary Fund, Uzbekistan's per capita gross domestic product was about $1,550 in 2018. Its economy grew 5.1% in real terms in 2018.