TOKYO -- Uzbekistan's trade minister reiterated his country's commitment to unified visa requirements for Central Asian nations based on a planned "Silk Visa," which is expected to increase tourism and promote regional integration.

Uzbekistan has the most liberal visa requirements in the region, granting visa-free entry to citizens of 86 countries. It would like to see its neighbors adopt the same approach.

"The idea of visa-free travel was something revolutionary for our country," said Sardor Umurzakov, minister of investments and foreign trade, in an exclusive interview with the Nikkei Asian Review. "We want other countries to join this because if we have a Silk Visa, then foreign tourists could benefit, and the countries of the region could benefit from this tourist flow."

The Silk Visa is an EU-style visa-free travel zone, allowing bearers to move freely between participating nations. Its planned launch this year has been delayed, but officials say they now have all the necessary approvals, leaving only technicalities to be ironed out.

Visa-free travel is part of the economic and structural reforms implemented by President Shavkat Mirziyoyev to open Uzbekistan to the world and integrate with its neighbors. Since Mirziyoyev took office in 2016, trade with neighboring Kazkhstan, Kyrgyzstan, Tajikistan and Turkmenistan has risen 54%.

Umurzakov was in Tokyo to attract Japanese business investment. Japan has been one of the top donors of development assistance to Uzbekistan in the country's 28 years of independence.

But Japanese business investment in Uzbekistan is dwarfed by China, whose presence in the country is growing thanks to its Belt and Road Initiative. According to French research institute IFRI, China in 2018 held investments in 786 Uzbek companies, while Japan had only 17.

Umurzakov said his government will accept investments from any country that can introduce innovative high-tech industries. "If they can help us propel Uzbekistan into the ranks of the 20 most developed countries in the near future, then why shouldn't we use them?" 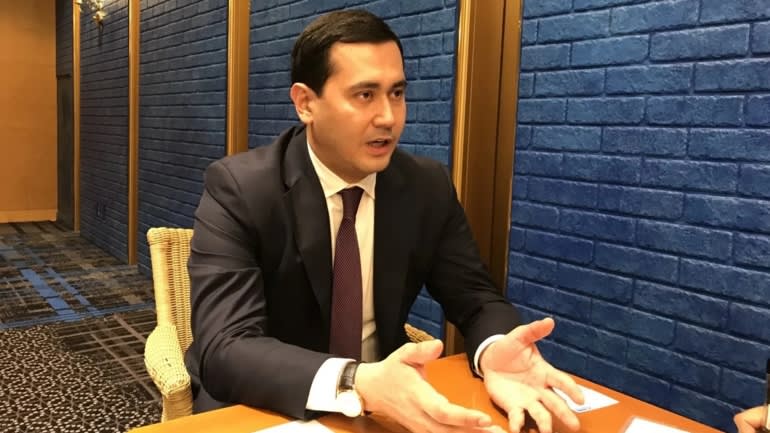 While Umurzakov says Uzbekistan is accepting investment from both Japan and China, neighboring Turkmenistan and Tajikistan have been plagued by debt owing to their participation in Belt and Road infrastructure projects. In April, Tajikistan granted China 100% stake in a gold mine for $300 million to build a power plant.

"I wouldn't tie debt to the [Belt and Road] initiative," Umurzakov said. "This is more an issue of government's management of debts. In Uzbekistan, we closely monitor our foreign debt."

The minister also met with officials of Japan's Ministry of Foreign Affairs, asking that high-risk classifications assigned to certain regions of Uzbekistan be reconsidered. The foreign ministry has issued travel advisories for parts of Uzbekistan bordering Afghanistan and Tajikistan, due to land mines planted by the Uzbek government.

"It doesn't mean that the southern region -- which shares a border with Afghanistan -- is less safe," Umurzakov said. "We're sure the whole territory is safe."

Uzbekistan is looking to attract investors in manufacturing, agriculture, energy and infrastructure. Umurzakov said the expansion of value-added exports is the government's strategy to protect Uzbekistan from global pressures, notably the U.S.-China trade war.

"Starting next year we will not export raw cotton because we've created capacities for processing and manufacturing value-added products," he said. "We have such a huge market in neighboring countries, and then other countries further away, including China and the United States."

To attract foreign investors in the energy sector, the government raised utility prices in August. "We've chosen a step-by-step increase in utility prices so that hikes will match rising incomes," Umurzakov said. "Our policies have already started to raise incomes. This makes us optimistic that utility prices will eventually reach market levels."