Motorbikes in Hanoi: Vietnam is one of only two countries in East Asia and the Pacific out in front in terms of economic recovery, according to the World Bank.   © Reuters
GWEN ROBINSON, Nikkei Asia editor-at-largeMarch 26, 2021 10:03 JST | East Asia
CopyCopied

BANGKOK -- The East Asia and Pacific region is experiencing a "three-speed" exit from the coronavirus pandemic and needs to reconfigure economic and fiscal policies to play a "triple role" of supporting relief, recovery and growth, the World Bank says in its regional Economic Update report issued Friday.

The report, based on surveys and research across East Asia and Pacific countries, highlights disparities in growth prospects of a region recovering from the impact of COVID-19 and harsh lockdown measures.

These differences have consequences for education, business, environmental policies and key socioeconomic factors affecting the region's potential, according to the report.

"Essentially we see a three-speed recovery," said Aaditya Mattoo, the World Bank's chief economist for East Asia and the Pacific. "Only China and Vietnam have followed a V-shape recovery path, with output surpassing pre-COVID-19 levels in 2020."

China, the epicenter of the pandemic, and Vietnam, one of the least-affected countries in Southeast Asia, bounced back strongly and are expected this year to record annual growth of 8.1% and 6.1%, respectively, the report noted.

In other major regional economies, output has averaged about 5% below pre-pandemic levels. Countries that have been unable to fully restore export industries, or which are overly dependent on tourism, are experiencing uphill battles to achieve even modest growth in 2021, the World Bank said.

Myanmar, engulfed by political and economic turmoil since the Feb. 1 coup, is likely to see economic growth contract by 10% this year, a drastic change from the World Bank's December projection of 2%. 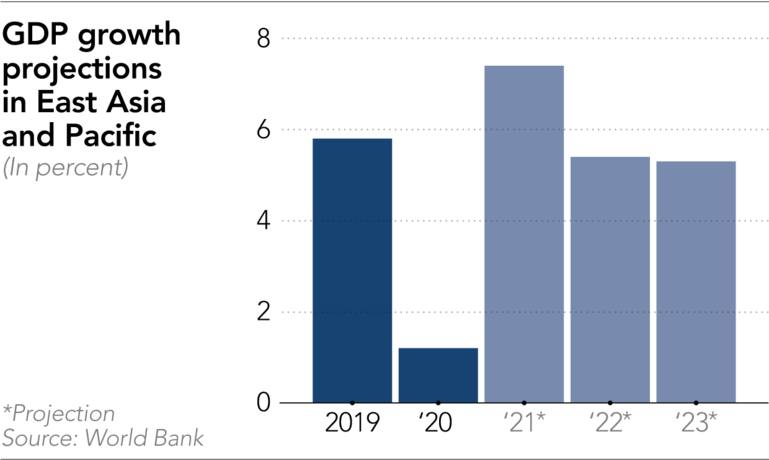 Among smaller countries, the recovery is expected to be particularly protracted in tourism-dependent Pacific island economies, with negative growth in about half the countries, even though they have been largely spared by the pandemic.

Including China, overall regional growth is expected to reach 7.4% this year, while the five main economies of Southeast Asia -- Indonesia, Malaysia, Singapore, the Philippines and Thailand -- are collectively expected to see 4.8% growth in 2021 and 5.1% in 2022.

Beyond the headline figures, inequality soared across the region, driven by the pandemic and related lockdowns, as well as unequal access to social services and digital technologies. "The depletion of physical and human capital is more dire among the poor because they suffer greater food insecurity and learning losses," the report noted. 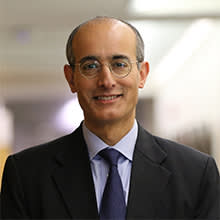 "As we move away from the crisis and some form of recovery sets in, support needs to be more targeted," says Aaditya Mattoo, the World Bank's chief economist for the East Asia and Pacific region. (Photo courtesy of the World Bank)

"When faced with income losses, poorer households are more likely to reduce their food consumption, drop out of school, accumulate debt, and sell assets, all of which undermine their ability to recover from the crisis," Mattoo said.

Amid ongoing economic distress, an estimated 32 million people who would otherwise have escaped poverty remained below the poverty line for upper-middle-income countries of $5.50 per day in 2020. In its previous regional update in September, the World Bank noted that COVID-19 measures together with the collapse of tourism and weak demand for the region's exports drove 38 million people below the poverty line and fueled a 3.5% annual economic contraction throughout 13 developing economies.

The newest report found that in some countries, children in the poorest two-fifths of households were 20% less likely to be engaged in learning than children of the top 20%, partly due to the digital divide and the focus on online schooling over the past year.

On the social front, one of the report's darker findings was a marked rise in domestic violence, mainly against women, in some parts of the region, with 25% of survey respondents in Laos and 83% in Indonesia saying that domestic violence had worsened due to COVID-19. "Food insecurity makes women more vulnerable to violence, and economic empowerment less so," noted the report.

The regional picture is further muddied by vast differences in timetables for vaccine rollouts and the overall record of COVID-19 management. China and Vietnam, which largely contained the disease, saw occasional local outbreaks later in 2020. Malaysia experienced a significant resurgence, while Cambodia, Myanmar, Mongolia and Thailand have seen a more limited resurgence of infections.

Among countries which experienced serious outbreaks a few months ago, the situation has improved, particularly in Indonesia, Malaysia, and the Philippines, although cases remain high. More worryingly, noted the report, the emergence of more transmissible variants of COVID-19 "poses new challenges to the containment of the disease globally."

While successful containment of the virus in some countries will support recovery of domestic economic activity, lingering infections in other countries "will be a drag on growth until wider implementation of the vaccine," the report noted.

On the upside, global economic recovery, supported in part by the significant U.S. stimulus, will revive trade in goods and could provide an external boost to growth of as much as 1 percentage point in the region, the report said. But, it warned, "global tourism is expected to remain below pre-pandemic levels till 2023 and delay economic recovery in tourism-dependent economies." 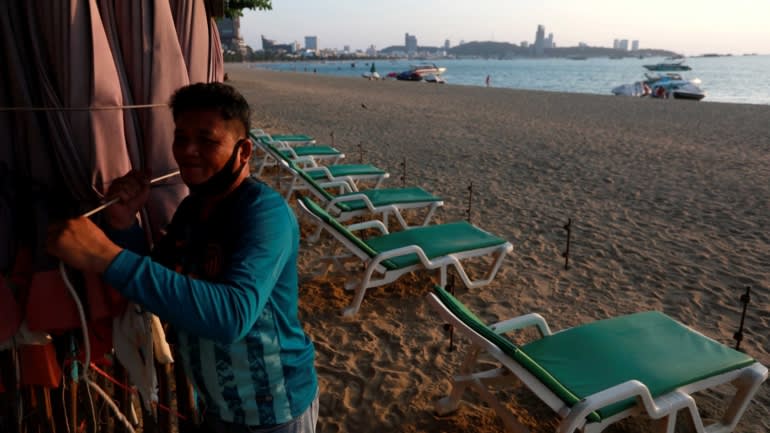 A man collects his umbrellas on an almost empty beach in  Pattaya, Thailand. Tourism-dependent countries are struggling to revive growth.   © Reuters

Public debt, meanwhile, has increased on average by 7% of gross domestic product in the region, as governments committed to fiscal support equal to nearly 10% of GDP (compared with levels averaging about 17% in Europe). While growing public debt and widening fiscal deficits are likely to constrain further government spending in the near term, the World Bank said fiscal policy should play a "demanding triple role" of supporting relief, recovery and growth.

While acknowledging the dilemmas for governments between providing adequate fiscal stimulus and prudent debt management, Mattoo said regional governments needed to increase the efficiency of expenditure -- for example by focusing on sectors and people most in need and to "actually deal with tax reform."

"As we move away from the crisis and some form of recovery sets in, support needs to be more targeted," he noted.

Overall, said Mattoo, "we are for the first time in 20 years, not going to see any reductions in poverty. Instead, we'll see an increase in inequality along different dimensions, between poor and rich people, men and women, small firms and big firms."

The reasons for this divergence revolve around three key factors, he said. "One is the efficiency with which the disease was contained. Second, the ability to take advantage of the revival and trade, especially for durable manufactured goods and electronic products. Third, the ability to provide significant fiscal and monetary support."

"There is one big upside, which is this huge U.S. stimulus, which we believe could have a big spillover benefit in terms of increased demand and lift growth rates in the region, on average by as much as one percentage point. The downside is slow implementation of vaccination."

Three major priorities for the region, according to Mattoo, are: "First, containing COVID-19 effectively; second, providing economic support on multiple levels, meaning relief for firms and households, stimulus to lift people out of unemployment, and investment in future growth -- and to do all this without risking instability, even as debt grows. The third is going 'green', without hurting growth or the poor."

The region is a major contributor to rising greenhouse gas emissions, with emissions tripling since 2000 and now accounting for nearly one-third of the global total, he noted.

"The region also faces the consequences of climate change. But decoupling output growth from emissions will require a massive transformation in consumption and production patterns."

China, he argued, can play an important role.

"It has more capacity to produce vaccines and testing equipment than it needs," Mattoo said. "It has the capacity and the physical space to boost its own consumption in a way that could increase global demand and lead also to more balanced growth at home, and it can act on climate, which it needs to do for its own safety, but has the capacity to do because of its strong economy in a way that would benefit the world."