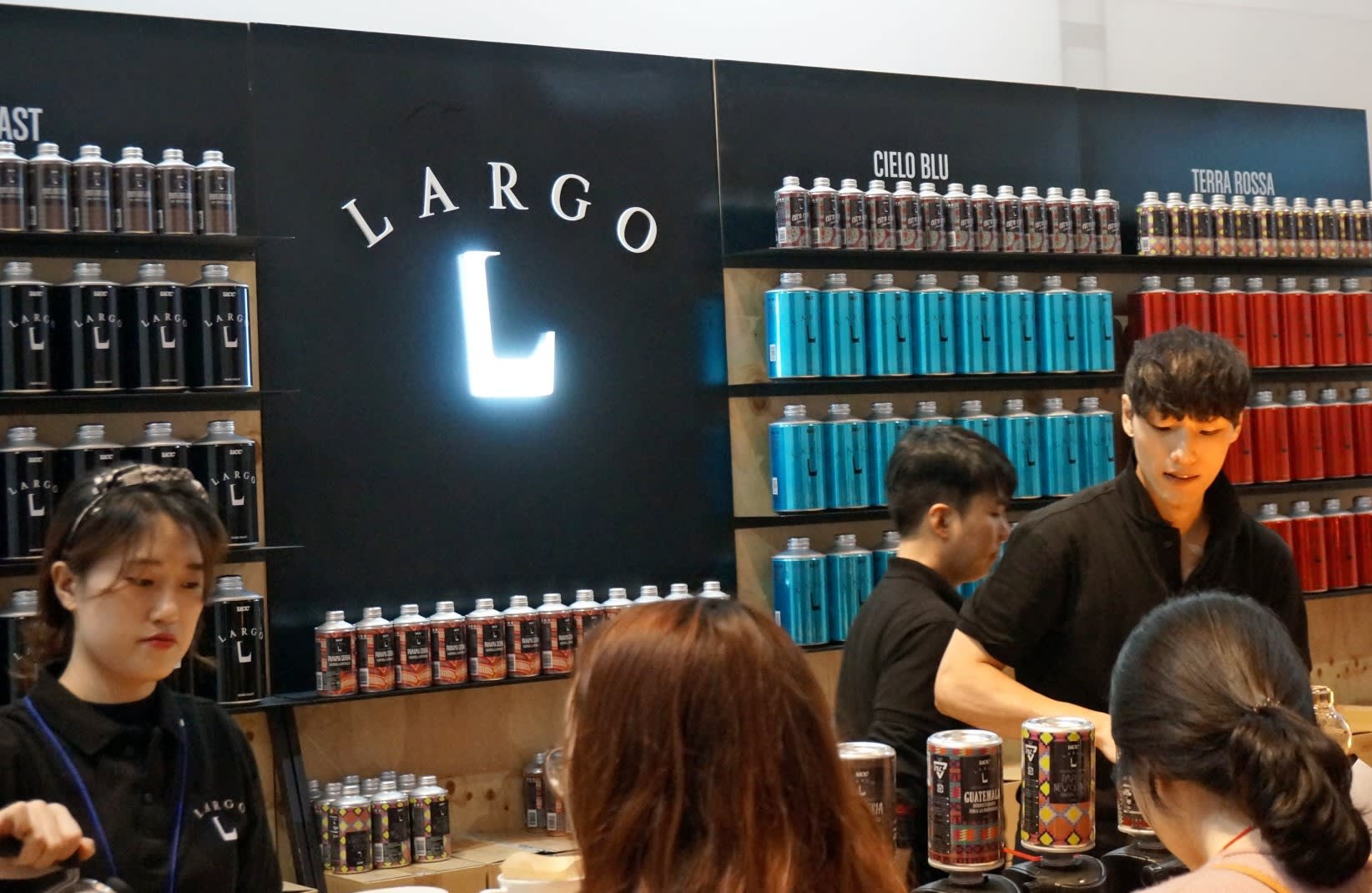 UCC introducing Largo brand coffee beans for professionals in South Korea: The company is offering a wide range of products and services in Asia in its quest to be the market leader.
NANA SHIBATA, Nikkei staff writerMarch 25, 2018 16:00 JST | Japan
CopyCopied

In January, the company set up a subsidiary, UCC International, to manage the group's overseas offices, which cover 17 countries and regions. The goal is to boost overseas revenues to equal 50% of total revenue from the current 30%.

Last December, the company opened UCC Coffee Roastery in Vietnam's Ho Chi Minh City. The cafe roasts its own beans and brews each cup of coffee. Although each cup costs about 400 yen ($3.77) -- pricey by local standards -- business at the cafe is brisk, a company spokesperson said.

UCC now operates nearly 60 such cafes in Asia, the first having been launched in Taiwan in 2016. The goal is to speed up cafe launches and have at least 260 open over the next five years.

In the Philippines, sales representatives of UCC are letting shoppers at supermarkets sample cups of coffee brewed from coffee drip bags that the company is promoting. A joint venture manufactures the bags.

In many parts of Asia, coffee is heavily sweetened with sugar. But UCC International President Seisuke Ueshima said, "A consumer segment that prefers authentically brewed coffee will grow as the economy grows. We aim to act early to capture increasing demand from this segment." UCC laid claim to the Japanese market by covering its bases -- from manufacture and sale of coffee beans and canned coffee-based beverages to operating its Ueshima Coffee House cafes. The company wants to export this business model to other parts of Asia.

UCC is also investing heavily in the region. In Singapore, it purchased a company that roasts professional-use coffee beans and a manufacturer of coffee machines used in cafes. In Indonesia, it has invested in a coffee roaster and wholesaler.

In all its investments, UCC has implemented strict quality standards developed in Japan.

UCC's overseas expansion started with the 2012 acquisition of United Coffee, a Swiss company. The 50 billion yen purchase increased the percentage of UCC's total revenues obtained from overseas operations to nearly 20% from just 2%.

The company is using United's existing network to expand its European presence.

UCC's overseas expansion is driven by its slumping domestic business. Consolidated revenue has remained largely flat in the past few years, totaling 325 billion yen in the year ended last December, despite the company's blossoming overseas operations.

Furthermore, the company decided to sell about 300 of its Kohikan-brand cafes to an investment fund in May.

"We can't survive only on our domestic business," Ueshima said. "We aim to make non-Japanese revenues the majority of our overall revenue by 2030."

Overseas markets, however, are not all that rosy either, including Asia, as the company faces stiff competition from international rivals, including Swiss food company Nestle and Dutch coffee company Jacobs Douwe Egberts.

"We're not going to enter the same arenas as our European and U.S. rivals," said Ueshima, who is heading the group's overseas expansion. "We plan to increase recognition of the UCC brand through offerings in multiple areas, including consumer-targeted products and cafes."