TOKYO -- The technology behind bitcoin now looks like an answer for overburdened parcel delivery services.

Saison Information Systems, a software developer in Tokyo, has devised what it says is a safe and reliable pickup locker system controlled using a blockchain -- a digital ledger that records transactions using cryptography. Requests to lock and unlock the boxes are sent through the blockchain, ensuring that only designated recipients can collect the parcels.

In Japan, the explosion of online shopping is straining courier companies to the limit. Redeliveries are particularly problematic -- when the recipients are not home the first time, delivery drivers have to go back, sometimes again and again.

Pickup lockers are an increasingly popular way around this, but conventional ones have their issues. Customers worry about forgetting their code numbers or losing their keys. And there is the risk that a thief might look over your shoulder to steal your number.

Upon logging into the app, a delivery driver will see which lockers are available. After depositing the parcel, the driver chooses the recipient through the app and submits a lock request. The information is recorded in the blockchain and the box is locked.

A delivery notification is sent by email to the recipient's phone.

Later, when the recipient comes by to pick up the package, it is simply a matter of logging into the app and choosing the appropriate box number. The removal of the parcel is also recorded on the blockchain.

Data on the blockchain is distributed across a network, making it less vulnerable than data stored in one place. Since the digital key to open the designated box is held by the user alone, nobody else can get in. Plus, since the system records everything, it is relatively easy to get to the bottom of any problems. 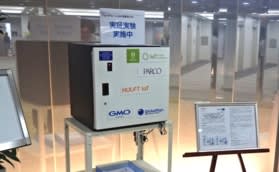 Saison Information's system is built on a cloud blockchain platform provided by GMO Internet. It has gone through two usability tests: in December 2016, and then in May and June of this year.

"We plan to conduct another test involving a parcel delivery company and a locker maker as well," said Yasushi Hisai, head of the distribution and IT solutions department at Saison.

Saison Information intends to serve courier companies and locker manufacturers through something called an application programming interface, or API, which enables a piece of software to issue instructions to another. It will be possible to incorporate the API into existing delivery systems and pickup lockers as well, linking them to the blockchain.

The company also plans to offer the system to various e-payment services, enabling payment on delivery.

"We will seek partnerships for this new business, drawing on the expertise we have accumulated through developing distribution systems," Hisai said.

The software developer aims to tap the technology's full potential: In July, it set up an organization called the Blockchain Labo for joint research. Pickup lockers and other new services may be only scratching the surface.