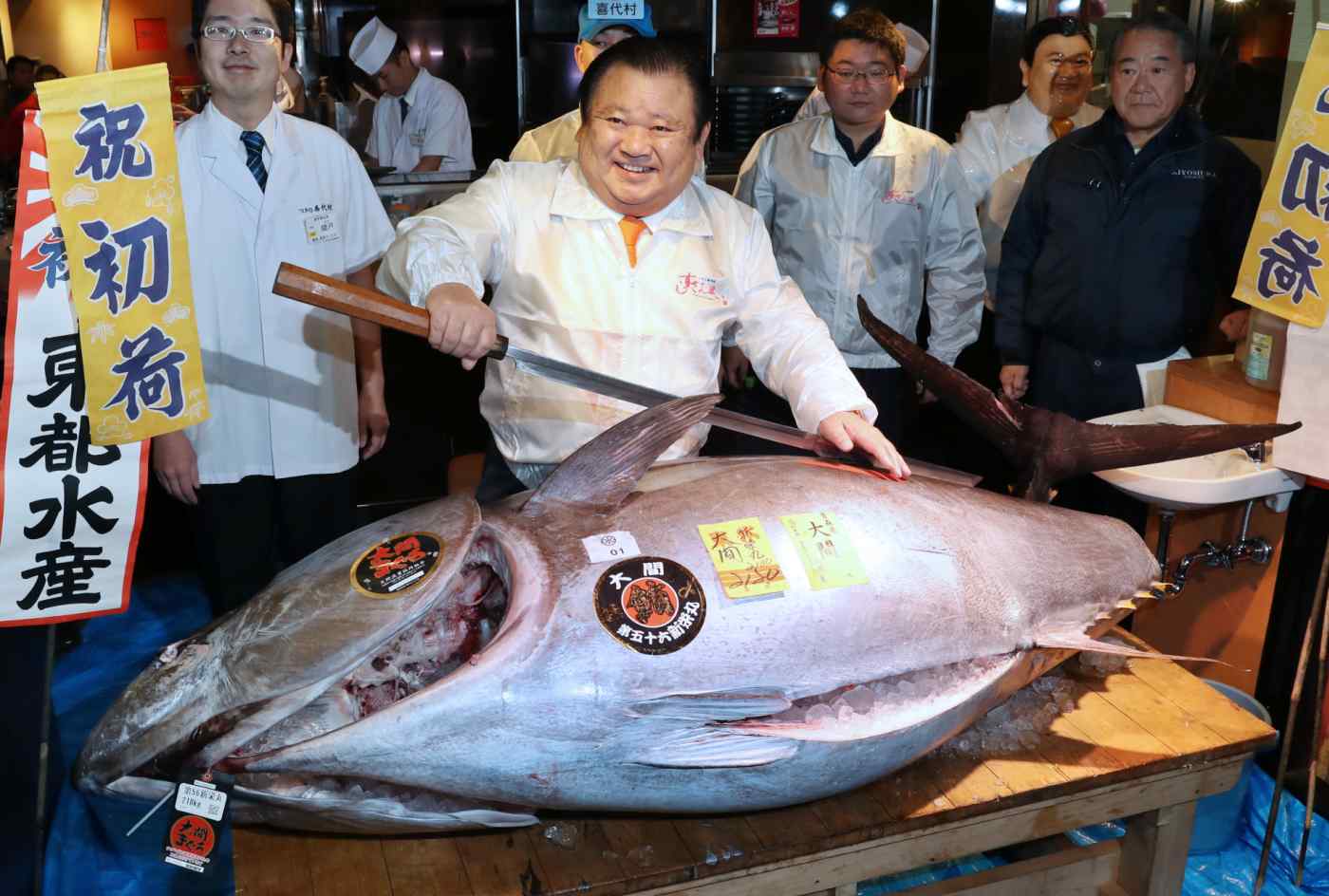 That translates to around $3,000 per kilogram, five times more expensive than the highest price at last year's first auction.

Kiyomura, the operator of the Sushizanmai chain of restaurants, ended up winning the auction for the sixth straight year amid tough bidding. Prices rose amid competition from rivals Tsukiji Sushiko and Genki Sushi, which took part in the New Year's auction for the first time.

"It was a tough auction because of our rivals," said Kiyomura President Kiyoshi Kimura.

Overall, however, prices did not go as high as before. There were only 1,523 tuna, fresh and frozen, at the auction, the lowest number in a decade and 13% less than last year.

"Fish weighing 100kg or less were about 20% cheaper than last year," said an official of the Tokyo Metropolitan Government.

After withdrawing from the top race against Kiyomura, Sushiko bid for a tuna for about $43,000. "We are happy to have won a good quality tuna for an appropriate price in this year's first auction," a Sushiko official said.

In the first auction of every year, potential buyers tend to bid higher than at ordinary auctions, as a way of giving a "tip" to the market operators.

At this year's New Year auction, Genki Sushi stood in the way of Kiyomura, which has been the dominant bidder for many years. Masuo Fujio, chairman of Genki Sushi, said, "Amid the underlying force of deflation, the eatery business sector is facing a tough environment. I hope our participation in the bidding war will help enliven the mood of the industry."

The outcome of the first auction "is considerably affected by weather conditions at the year-end and New Year holiday period," said an official at Tohto Suisan, a Tokyo wholesaler of marine products, which supplies the Tsukiji market. At the end of December 2016, very few squid -- bait used to lure high-quality tuna -- were caught in and around the Tsugaru Strait, and this limited the supply of tuna to the market.

In 2013, the $1.33 million winning bid cost roughly $6,000 per kilogram, making it the most expensive tuna ever. At that price, "it is possible to buy a boatload of tuna," said an executive at Chuo Gyorui, a Tokyo wholesaler of marine products. The price translates into a hand-rolled sushi made of the tuna costing $860. That year, the operator of the Sushizanmai chain and Itamae Sushi (a rival sushi chain based in Hong Kong) bid up prices to dizzying heights, eventually allowing Sushizanmai to win the bidding battle. In 2014, Itamae Sushi dropped out of the game altogether, and the highest bid came to only $275 per kilogram.