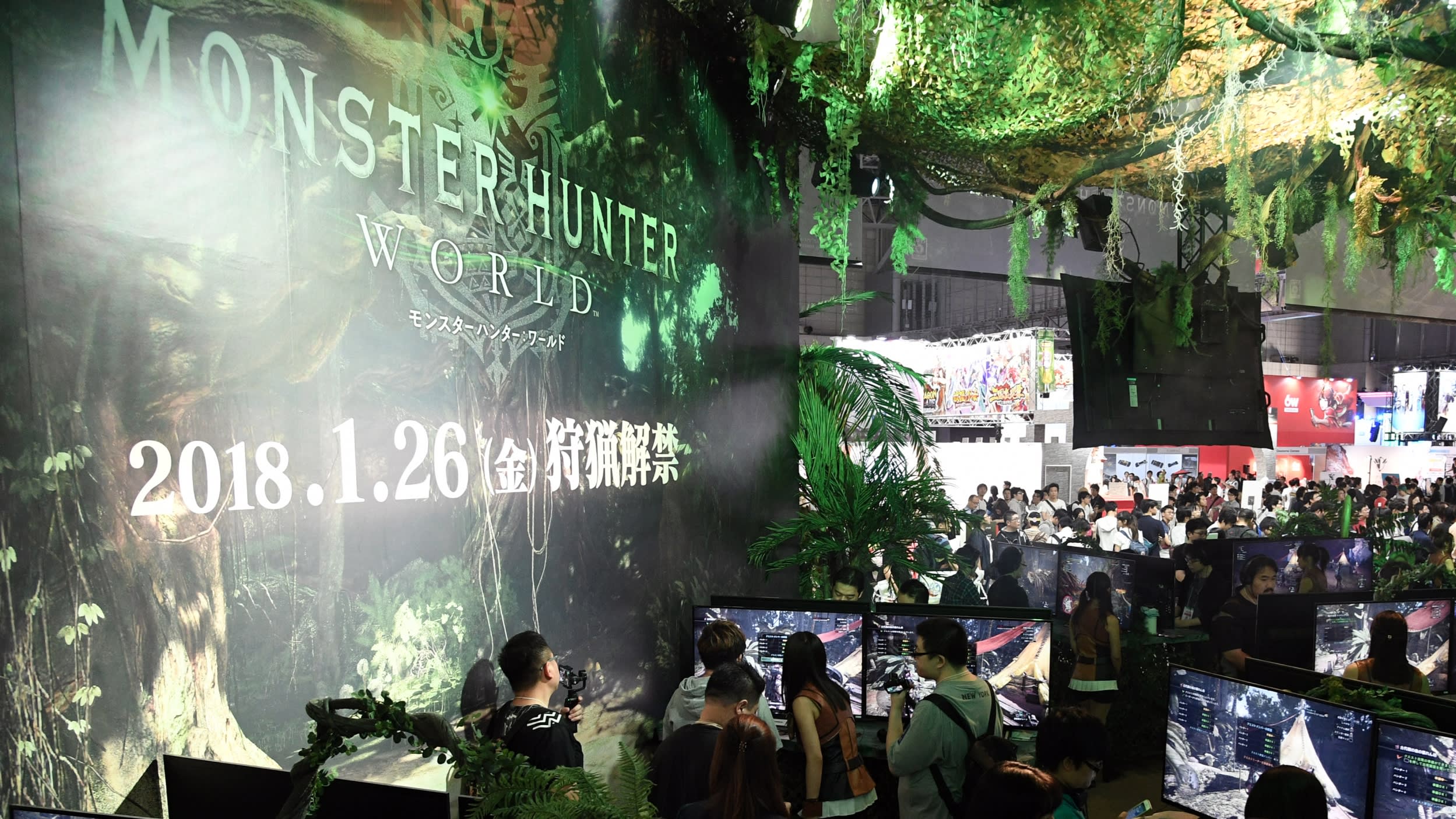 TOKYO -- Video game developers have long dreamed of infusing their works with both the special effects magic and realism of a Hollywood blockbuster. Osaka-based Capcom seems to have pulled off this trick, if early reviews of the latest installment of its "Monster Hunter" series are anything to go by.

"Monster Hunter: World," unveiled to the media on Thursday at Tokyo Game Show 2017, goes a long way toward fulfilling the vision of Capcom's founder, Chairman and CEO Kenzo Tsujimoto: to create a player experience more like being in the middle of an action-packed movie than manipulating cartoon characters on a screen.

The game pushes the boundaries of 3-D virtual reality in a way that is sure to grab the attention of fans. It is the product of Capcom's aggressive investment in state-of-the-art motion-capture and computer graphics -- something that has helped it come up with products that stand out from the crowd. At Makuhari Messe convention center in Chiba, near Tokyo, the venue for the annual industry event, many gamers were clearly impressed by the new "Monster Hunter."

The latest title in the franchise, which has sold around 40 million copies in all, is "great fun because hunters can hunt down and kill monsters, moving more freely and dynamically than in the past," said one visitor. "The graphics are so realistic in details -- like the waves on the surface of the water and the spattering of dirt -- that you feel as if you are actually experiencing them," said another.

Since it was launched 2004, the "Monster Hunter" series has been a cash cow for Capcom. In the game, the player slays or traps monsters in various wild settings. The series has a large group of passionate devotees, some of whom even gather outdoors to enjoy the game together. Many industry watchers praise "Monster Hunter: World" as a big step up from earlier versions of the game.

Since 2011, Chairman Tsujimoto has been working to beef up the company's research and development. Its new 10 billion yen ($89 million) R&D center in Osaka boasts an array of cutting-edge video and audio technologies, including 3-D virtual reality. "Monster Hunter: World" is Capcom's first title to take full advantage of the facility. The heart of the R&D center is a motion-capture studio that can produce high-quality graphics in 3-D. The 8-by-12-by-7-meter studio is where the game's characters come to life. An actor wearing a motion-capture suit equipped with 36 markers moves, as 36 infrared cameras record every twist and turn. The system faithfully renders the subtle motions of arms and legs, creating more natural on-screen movement.

The studio allows finer body movements, such as those caused by the recoil of a gun, to be recreated on screen, said Ryozo Tsujimoto, the third child of chairman and chief producer of the "Monster Hunter" series. The system generates 3-D graphics that realistically render half-centimeter movements by characters.

The latest edition of "Monster Hunter" appears to have met even the chairman's exacting standards. Kenzo Tsujimoto calls the game "very satisfying," and is even more enthusiastic with outsiders, touting it as "awesome software."

As part of a plan launched in fiscal 2012, the company has been hiring around 100 engineers annually, aiming to expand its R&D staff to 2,500. It spends the equivalent of 30% of sales on game development.

But despite having a number of worldwide hits to its credit, Capcom, with group sales of slightly less than 90 billion yen, is not a corporate giant. The company's go-it-alone development strategy is risky, but the chairman remains committed to creating games in house. His long-cherished ambition is to make games that are as exciting as Hollywood blockbusters.

"Resident Evil 7," the latest title in the series of that name -- called "Biohazard" in Japan -- is another example of the chairman's vision. It is the first fully virtual reality game aimed at the home market, the company said.

For all its titles, the goal is to enhance the player experience. Capcom has shelled out an estimated 10 billion yen on a new game engine, as the software framework for developing video games is called. The engine can create such visual effects as multihued shadows. It is the fruit of engineers' efforts to make virtual reality less virtual and more real.

Chairman Tsujimoto's business strategy has focused on building a solid financial foundation for creating games. Since the early 1990s, he has moved the company into new businesses, such as movies based on the popular "Street Fighter" game series. Capcom has earned fat profits from six Hollywood films based on the "Resident Evil" series, which began in 2002.

The expansion is paying dividends, with Capcom achieving an operating profit margin of around 16% since the year ended March 2015.

But the outlook for the company in a cutthroat market remains cloudy. Chairman Tsujimoto stresses the importance of a diverse product portfolio, saying the company will fall behind global powerhouses if it focuses too much on mobile games. But success in the segment is crucial to the company's future.

Many insiders are also worried about succession at family-run Capcom. In 2009, Haruhiro Tsujimoto, the founder's eldest son, became president of the company at age 42. Meanwhile, the chairman is still active. Kenzo will turn 77 in December and it may not be long before Haruhiro moves into the CEO slot, but he will have a hard time matching his father's charismatic management style.

The president predicts the video game market will enter "a new, turbulent era" due to a spurt in technological innovation.

Microsoft plans to roll out a new game console later this year. A wave of new technologies, including artificial intelligence, could bring gaming to the next level, with bigger prizes -- and pitfalls.