Police officers explain to a driver at Tokyo's Haneda Airport that it is illegal to operate a taxi without a license.
AKINOBU IWASAWA and MIO SADAKATA, Nikkei staff writersNovember 27, 2017 16:30 JST | Japan
CopyCopied

TOKYO -- It is early November and a group of Chinese tourists lands at Tokyo's Haneda Airport. They pass through customs, grab their luggage and head straight to a passenger vehicle at a pickup point outside the terminal, leaving behind a row of empty cabs.

These chauffeured vehicles have been dubbed shirotaku, or "white taxis." The name might give the impression of innocence, but the practice is completely illegal -- it is a reference to the white license plates on private vehicles as opposed to the green ones reserved for taxis.

Uber's business model to the rescue in rural Japan

White taxis are becoming a fixture at major airports and tourist destinations across Japan, thanks largely to a rise in the number of Chinese tourists, and they are a growing nuisance for the police.

With little evidence to go on, it can be all but impossible to prove someone is operating an unlicensed taxi. For the most part, they are booked and paid for in advance through smartphone apps.

One such app in China lists thousands of drivers registered in Japan along with photos and customer reviews. The drivers are advertised as fluent Chinese speakers with ample experience on Japanese roads. It also claims they charge significantly less than regular taxis.

In late October, police in Osaka arrested four Chinese unlicensed taxi drivers. According to the police, they regularly ferried foreign tourists between Kansai Airport and the city center for about 3,000 yen ($26.9) less than what a regular taxi would charge. Two others were arrested in the southern prefecture of Okinawa in late June.

But these are isolated cases and bringing charges is not easy. Tourists typically complete the transaction before even setting foot in the country. "Since payments are not made in Japan, there is no evidence unless we check the passenger's credit card information," said a police official.

"If we can't confirm that money has actually changed hands and if the driver says he is just giving his friend a ride, that's that."

The rise of the white cabs has partly been put down to the authorities' reluctance to allow ride-sharing services.

Unlike in China or the U.S., the likes of Uber and Lyft are essentially banned in Japan -- apart from in some rural areas. Their absence leaves the road open for unlicensed cabs. 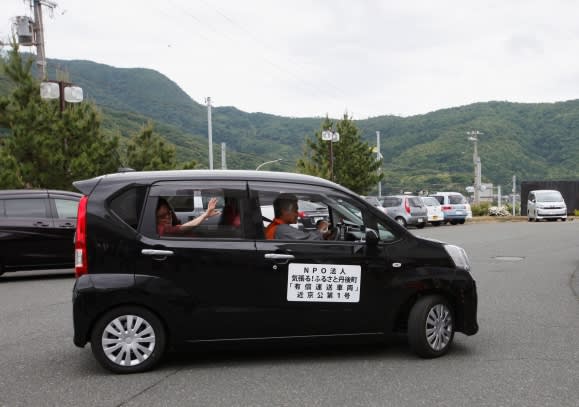 Ride-sharing services are only allowed in certain rural areas in Japan such as Kyotango in Kyoto Prefecture.   © Reuters

The taxi industry and police have joined forces to tackle the issue. The Tokyo Metropolitan Police Department's office at Haneda Airport has been telling drivers in passenger vehicles that it is illegal to carry people for a charge without a taxi license.

The bureau's Okinawa office began handing out leaflets in Chinese and English to passengers disembarking cruise ships this summer to warn them that white cabs are illegal.

Japan welcomed a record 24.03 million foreign tourists last year, up about 20% from a year earlier. The government hopes to raise the figure to 40 million by 2020, when the Olympic Games are due to be held in Tokyo.

"It is difficult to tell white cabs from other cars, but we are trying hard to raise awareness," said the Metropolitan Police Department.

The government's Regulatory Reform Promotion Council has been considering lifting the ban on ride sharing, but the transport ministry remains cautious.

"The suggested framework, in which only the driver is responsible for the transport service, is problematic in terms of ensuring safety and protecting passengers," said Transport Minister Keiichi Ishii. "Lifting the ban requires extremely careful considerations."

Currently, ride sharing is only allowed in certain areas where populations are shrinking, but local authorities must obtain consent from the taxi industry, and that is not immediately forthcoming on many occasions.

There appears to be a long road ahead before ride sharing is endorsed. Until then, it seems there is little that can be done about the growing scourge of the white cabs.