Japanese heroes drive profits thanks to online videos and smartphones

TOKYO -- Some of Japan's biggest intellectual property holders have figured out the smartphone era. As a result, they are making tidy profits off old manga and video game characters.

"Dragon Ball" is set to become the leading profit driver at Bandai Namco Holdings in the current business year through March. According to the company, sales of Dragon Ball-related content will likely be 60% higher than a year before, at 96 billion yen ($896 million).

While Dragon Ball is becoming the company's biggest profit driver for the first time, though, Gundam-related sales are expected to shrink by 10% to 67.5 billion yen. The robot anime had led Bandai's earnings for years.

The rise of Dragon Ball as a cash cow owes much to the smartphone game app "Dragon Ball Z Dokkan Battle," released in January 2015. The fighting game is played in about 50 countries and has been a No. 1 hit in the U.S. and elsewhere. It has been downloaded over 200 million times (10 million is considered enough to call any smartphone game a hit).

In-game purchases made in Japan generate stable revenue, and the game's user base is expanding overseas.

In fact, there is something of a Dragon Ball economic boom. Akatsuki, which developed and manages the smartphone app, earned a record group net profit for the April-December period. Toei, a film distributor, reported on Feb. 14 better than expected earnings for the nine-month period thanks largely to subsidiary Toei Animation, which holds Dragon Ball's copyright. 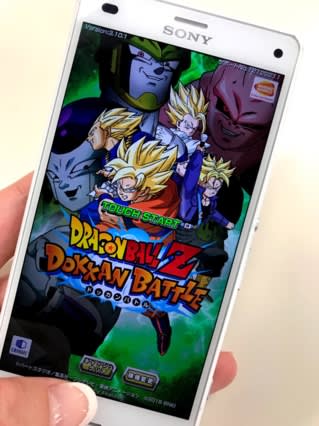 The more in-game fees users pay, the more royalties Toei receives from Bandai Namco. On Jan. 26, Toei Animation upwardly revised its full-year earnings forecast, stoking expectations that parent Toei could post a profit for the full year instead of the currently forecast loss.

In the year ending March 31, Toei's operating profit margin is expected to rise by 3 percentage points to 13% compared to fiscal 2013, before the game was released. Royalty income, which requires no additional investment, gets much of the credit.

Dragon Ball began in manga form in 1984. It was an instant hit, leading to anime and film adaptations -- a classic example of turning a copyright into multiple revenue streams. This time, the drivers of the series' re-emergence are smartphones and overseas markets.

That is exactly what Sony has done. The "Fate" computer game, developed by Sony's anime unit in 2004, was adapted to anime in 2006. The story of magicians vying for the holy grail, which can grant any wish, has captivated game maniacs. A big leap came in 2015, when the smartphone game adaptation "Fate/Grand Order" was released. The app is still among the top three in terms of in-game charges on various app stores. "It makes at least 10 billion yen a month," an official at a Japanese brokerage said. The game is helping to drive Sony's profit to a record high this fiscal year.

Box office receipts for the film, released in October, have exceeded 1 billion yen, a threshold that christens films as successful.

Nintendo, which owns popular characters like those from "Mario Bros." and the "Kirby" series, has high hopes for its intellectual property. In 2014, the company reversed its previous stance of limiting its licensing business, and that is starting to pay off.

In April-December, Nintendo's intellectual property income, including sales from smartphone games, came to 29.1 billion yen, accounting for 3% of the company's total income for the quarter. Though still modest, "the [potential] impact of a growing fan base on the sales of game consoles and titles is huge," said Hideki Yasuda of Ace Research Institute. For example, some point out that the success of the smartphone game "Pokemon Go," a global fad a couple summers ago, helped push sales of a new Pokemon title for Nintendo's portable game device to over 16 million.

Nintendo plans to make greater use of its intellectual property. It is set to open "Super Nintendo World" at Universal Studios Japan around the summer of 2020. The 60 billion yen investment will be the theme park's largest ever. President Tatsumi Kimishima said he wants to make Nintendo's intellectual property "a source of competitiveness" for the company. 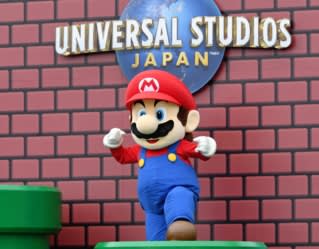 A common problem among these entertainment companies is their aging characters. Mario and Dragon Ball have been around for over three decades, and Gundam nearly four decades. A successful business model will fail if it runs out of hit characters.

"Over the next three years, we will spend 25 billion yen to create new intellectual property," Bandai Namco President Mitsuaki Taguchi said on Feb. 9 as he presented a medium-term business plan. The sum is relatively large, nearly 20% of the company's cash on hand, and comes from a sense of urgency.

The company's list of popular characters has changed little over the past 10 years. "We can continue with this for the next 10 years," Taguchi said, "but not beyond that."

Opportunities also abound overseas. But they come with challenges. On Feb. 14, Sanrio downwardly revised its full-year earnings forecast, citing struggles in North America as the biggest reason. The 2014 Disney film "Frozen" became so popular that character goods from the movie pushed Hello Kitty and other Sanrio characters off of retailers' shelves.

Some Sanrio characters, like Pompompurin and Gudetama, are doing well in Asia outside Japan but not well enough to make up for the lost ground in North America. "Recovery in the U.S. and Europe is taking longer than expected," Senior Managing Director Susumu Emori said.

The company plans to introduce drastic measures in its upcoming medium-term business plan starting in April.