CHIBA, Japan -- Japan had a lot of success in video games while its citizens preferred to play alone. But tastes are changing and gaming is no longer a solo activity. The future of gaming requires a computer, an internet connection and millions of other users around the world to compete with.

Despite Japan having brought video games to the world, with consoles like Super Nintendo and Sony's PlayStation, the gaming pioneer has been slow to embrace the massive business of esports -- multiplayer video game competitions that draw big crowds and dangle cash prizes.

That may finally be about to change.

In a first for the Tokyo Game Show, Japan's largest annual game expo, sponsors Sony and Samsung Japan are making esports a central attraction of the event, featuring the competitive gaming on two stages with a combined 1,000 seats. Eight esport tournaments will be open to the public this Saturday and Sunday.

Attendees can watch some of the top professional gamers from Japan, the U.S., Taiwan and Singapore battle it out in soccer game "Winning Eleven" and first-person shooter "Call of Duty", among others.

"We will bring opportunities for esports that can be enjoyed throughout the world. We are ready to take this ambitious challenge," said Hideki Okamura, president of Sega Holdings and chairman of Computer Entertainment Supplier's Association, the organizer of the expo, at the opening ceremony on Thursday.

This year's Tokyo Game Show has 609 companies and organizations participating, 317 of which are from outside Japan. They will compete for attention over the four days of the show, which runs until Sunday at Makuhari Messe, a convention hall just outside of Tokyo, with over 250,000 visitors expected.

Esports, short for electronic sports, is already big business in the U.S., Europe and parts of Asia, where prizes for some events can soar into the tens of millions of dollars. Globally, the esports industry generated $493 million in revenue last year, with an audience of about 320 million people, according to market research firm Newzoo. Revenue is expected to reach $1.5 billion by 2020.

By comparison, Japan has been slow to embrace esports, in part because of domestic laws that restrict cash prizes for events and stop prize money from being pooled using proceeds from ticket sales. Other reasons include the popularity in the country of role-playing games, which are mostly played solo. 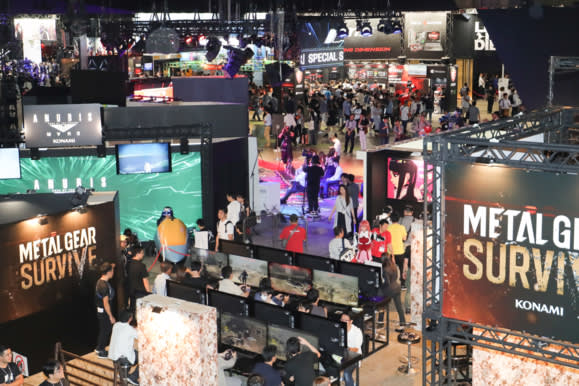 The Tokyo Game Show is expected to draw over 250,000 visitors this year. (Photo by Ken Kobayashi)

Still, this is not stopping companies from around Asia and beyond from showing off their technology at the Tokyo show, hoping to tap the growing market.

"Japan's esports scene is still at its growing stage, but we want to continue supporting these events to grow and be part of the excitement," said Sungil Lee, manager at Samsung Japan's memory marketing group. "We are confident that it will attract more players."

The company, a subsidiary of South Korea's Samsung, has joined hands with DMM.com, a Japanese e-commerce and internet company, to host one of the two esports stages. Fifty computers are spread around the area, with fans playing "Playerunknown's Battlegrounds," an online battle royale game which has sold 12 million copies globally since it was released in March.

Participation from non-gaming companies like Samsung will be crucial to boosting the sector with advertising, ticket sales, merchandise and more, Lee said.

Twitch, an internet streaming platform bought by Amazon in 2014 for $970 million, is also ready to lend a hand to the Japanese esports scene. The company has set up a massive booth at the show comparable to those of gaming heavyweights like Konami, Capcom and Sega Games, and has officially announced the opening of its Japanese office in Tokyo.

The annual gaming expo is also a stage for up-and-coming Asian companies to showcase their products and services. At the Asia New Starters Corner, regional game ventures and developers from Malaysia, Indonesia, China and India have set up booths headed by local agencies and industry groups.

Even there, the buzz word was esports. A promoter for Semisoft, an Indonesian game developer, demonstrates a title at Tokyo Game Show 2017, in Chiba, Japan, on Sept. 21. (Photo by Ken Kobayashi)

The business opportunity goes beyond the gaming industry, according to Mohan Low Han Sen, head of interactive media at Malaysia Digital Economy Corporation, a government-owned agency that sent representatives to the show with some of the country's leading 3D game outsourcing companies.

"Recently in our cinemas, they stream esports championships like 'Dota 2'. Eight halls in the cinema were packed and sold out," he said. "There are a number of associations and several esports academies in Malaysia. Broadcasters and media companies cannot ignore this phenomenon."

The competitive video gaming scene is set to expand across the region. Of the 6 billion hours of esports watched globally last year, China, home to over 500 million gamers, accounted for 57% of all esports viewership, which was ahead of North America, according to IHS Markit.

On top of this, esports is slated to become an official medal event at the 2022 Asian Games in China. In April, the Olympic Council of Asia announced a partnership with Alisports, the sports arm of Chinese online retail giant Alibaba, to introduce esports as a demonstration sport at next year's games in Indonesia.

"Esports is definitely the future of sports," said Gautam Virk, director at Nodwin Gaming, an esports management firm in India that runs the country's ESL, the world's largest esports competition. "There is tremendous momentum in Asia."