For Uniqlo's Yanai, Victoria's Secret was a real eye-opener TOKYO -- Back in the early 1970s, Tadashi Yanai headed back to the old coal mining town of Ube, southwest of Hiroshima, to take a job managing his family's tailor shop.

Then in his mid-20s, the hard-charging Yanai very quickly made the store a place employees did not want to work. "Six of the seven employees quit," Yanai admitted during a wide-ranging interview with The Nikkei. "Until then, I had thought business management was not for me."

Today, more than four decades on, Yanai, 68, is president of Fast Retailing, the parent company of Uniqlo, a global casual fashion empire. Tough lessons learned at the family business, coupled with an innate curiosity about what it takes to be a corporate leader, formed the secrets of Yanai's later success.

During the interview, Yanai talked about his management philosophy, work habits and his views on Japanese corporate life (including his relationship with Masayoshi Son, chairman and CEO of SoftBank Group).

He began the conversation with a counter-intuitive view on his career. Hard work, it seems, had little to do with it. "If your effort is pointed in the wrong direction, you're out of luck," he said with a laugh. "No chance. You'd be going around in circles." 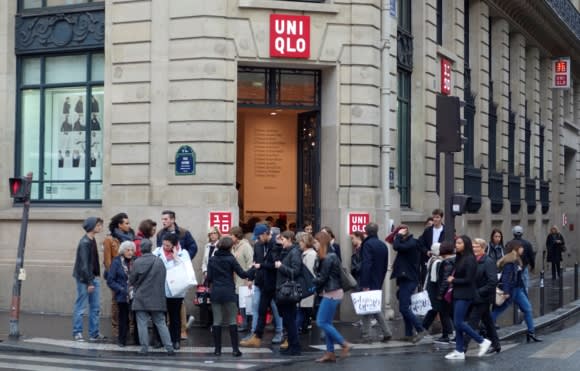 Tadashi Yanai was managing his family's clothing shop in a small Japanese city when a trip to Europe showed him how a global fashion chain might be run. Eventually, Uniqlo would open this location in Paris.   © Reuters

A short, stocky man with close cropped hair, Yanai claims he was an introvert as a youth. He preferred books to people. Reading came naturally. Interacting with others? Not so much. "I was a bookworm, basically," he explained. "I liked to read biographies of legendary entrepreneurs and businesspeople, like [Panasonic founder] Konosuke Matsushita and [Honda Motor founder] Soichiro Honda. I'm not sure if you can call these books business case studies, but they became my quasi-experiences. Even now I sometimes say, 'Wait a minute, this may have something in common with what these people went through.'

"I also read 'Managing' by Harold Geneen again and again," Yanai said, referring to the book written by the former president and CEO of the now defunct U.S. conglomerate ITT. The scholar would soon start to make use of his lessons out in the real world, forging an incongruous business management philosophy. "It is like reading a book backward. You know the conclusion first. Then you decide what you must do to get there and implement. It's a simple principle, but I realized I wasn't doing it myself."

The intellectual breakthrough came during his travels to the U.S. and U.K. "I liked American culture, especially the culture of younger generations," he said. "So I visited the U.S. and the U.K. many times since when I was a student, learning what others in the apparel business were doing.

"At that time, I learned that a businessman by the name of Leslie Wexner of The Limited [now L Brands], which operated the Victoria's Secret chain, achieved 1 trillion yen ($9 billion) in sales in a record short period. He is the merchant I admire the most.

"In the U.K., I learned, a clothing retailer called Next increased annual sales from 2 billion yen to 200 billion yen in eight years. I would visit their outlets every season. When you look at their catalog from the late 1980s, even today you wouldn't think their designs are dated at all.

"I thought, maybe that's the kind of thing we can do in Japan. I was dreaming of growing our business into a company just like those Western companies." 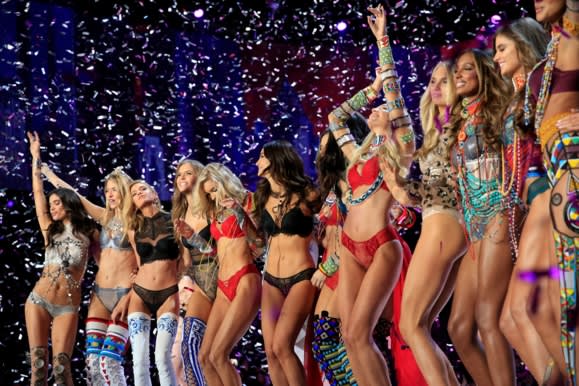 The 2017 Victoria's Secret Fashion Show in Shanghai: The businessman behind the lingerie brand provided Yanai with some inspiration.   © Reuters

Back in Japan, the reality was bleak. "We were a men's clothing store in a provincial city where 170,000 people lived," he recalled. "Given the reality at that point, I was thinking it wouldn't be bad at all if, at the end of my career, I were able to grow a company with maybe 30 stores and annual revenue of 3 billion yen."

Today, Fast Retailing employs 110,000 people. It runs 1,920 Uniqlo stores worldwide with over 1,000 of them outside its home market of Japan. With an especially strong foothold in China, Hong Kong and Southeast Asia, Fast Retailing earns 47% of its revenue overseas. 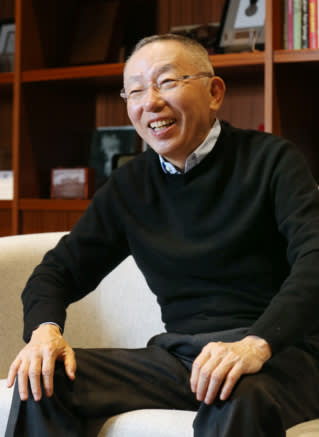 "I oppose all of Masayoshi Son's big investments," Yanai joked in an interview with The Nikkei. (Photo by Rie Ishii)

Despite his modest ambitions, Yanai proved to be very good at his job, never regretting his decision to return to Ube after working, post graduation from college, at Aeon, one of Japan's largest retail operators.

"Many people don't understand this," he said, "but truly successful entrepreneurs are very cautious. Microsoft founder Bill Gates, for example, says 'You must worry.' He notes that boldness doesn't pay and that you need to be focused.

"Another thing is finding the megalomaniac inside you," Yanai said, laughing. "I mean, entrepreneurship. Our company motto is: 'Changing clothes. Changing conventional wisdom. Change the world.' Even I'm like, 'Wow, this is a big statement.' But, seriously, I think you need to have this kind of spirit."

Here, Yanai's philosophy can be easily misunderstood. Yes, he wants to change the world, at least the way it dresses. To many people, though, this can look similar to a desire to conquer the world and make a fortune.

But these people have the wrong idea.

"Never in my life have I worked for money," Yanai said. "I couldn't care less about making money. You're hopeless if that is what drives you. Too many entrepreneurs are like that, with a goal of listing their company and to take the money. But money evaporates quickly. You've earned hundreds of billions of yen? So what?" 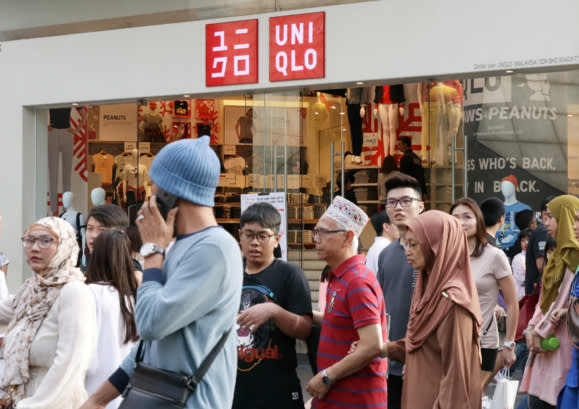 People walk past the Uniqlo shop in Kuala Lumpur. Southeast Asia is a growth engine for the clothing chain. (Photo by Shinya Sawai)

He applies the same modesty to his working hours. Yanai wakes up around 5 and comes to work by 6:45. His favorite time of the day is between 6:30 to 7:30, when there are no phone calls and no visitors. He uses this precious time thinking about the day ahead.

"A leader's job is to think," Yanai said. "It is not his or her job to do the heavy lifting. That is for employees to do. The leader has to think of a way to make the company something employees find worthwhile, something to devote themselves to.

"I'm sure it's the same for SoftBank's Son-san and [Nidec's charismatic chairman] Shigenobu Nagamori-san. We are all thinking 24 hours of the day."

Yanai leaves the office as early as 3 p.m. or 4 p.m. He plans to leave even earlier in the future.

Be cautious. Refrain from boldness. Do not worship the dollar. From Yanai's mantras, you would never guess that he sits on the board of SoftBank, a not-so-humble cellphone service provider that has morphed into something akin to a sovereign wealth fund, one that this month placed a multibillion dollar bet on creating a global ride-hailing empire.

So how does Yanai get along with Masayoshi Son, SoftBank's chairman and CEO?

"Well, maybe Son-san is a little too courageous or, you know, too bold," Yanai said. "These days, I'm always telling him: 'Don't forget to hedge your risk.' I find myself opposing all his big investment projects!"

Yanai, who rarely hesitates to point out others' fault, laughed at the thought. But then, ever cautious, he quickly hedged his position. "Son," he reflected. "does his calculations." 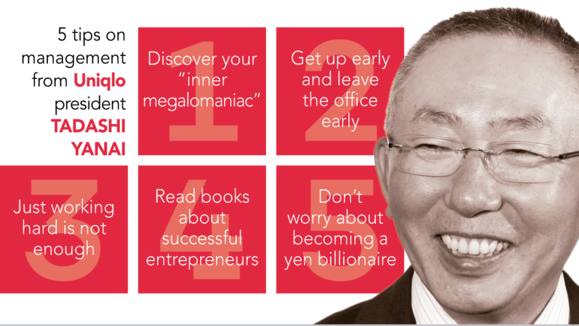