TOKYO -- Hitachi on Wednesday narrowed its projected operating profit decline for the year ending in March, benefiting from rising sales in core businesses and successful cost cutting. Shares in the company rose as much as 4.8% to 679.50 yen on the news on Thursday.

The industrial conglomerate said in now expects group operating profit to fall 12% to 560 billion yen ($4.92 billion), up from the previous estimate of 540 billion yen. This beat the QUICK consensus, which is the average of analysts' forecast, of 554.3 billion yen. 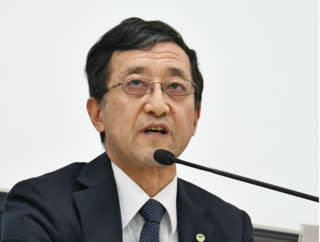 Hitachi based the rosier assessment on its April-December results. "This marks our highest operating profit margin on record for the nine-month period," said Chief Financial Officer Mitsuaki Nishiyama. The Tokyo-based company has sold off a number of non-core operations such as finance and logistics this fiscal year, and has implemented staff cuts and other structural reforms.

Half the added 20 billion yen in operating profit is attributed to streamlining and higher sales; the other half to a weak yen. The company upgraded its profit projections in chipmaking equipment and high functional materials. Hitachi still expects group sales to drop 10% to 9 trillion yen, but raised its expected operating profit margin from 6% to 6.2%.

The big question now is which businesses Hitachi can rely on for growth. The group aims to reach 10 trillion yen in sales and an operating margin of more than 8% in fiscal 2018 -- but boosting both figures at the same time is difficult. It is unclear whether sales can bounce back from the 1 trillion yen lost this fiscal year mainly through divestments.

Hitachi is focusing its efforts on railroads, IT systems and in-car devices, but internet of things holds the key to growth. The company is developing its own IoT platform to help manage rail traffic and boost productivity at factories. It announced Wednesday that a new officer will be appointed at each business segment, charged not only with marketing the platform to outside clients but also with applying it to Hitachi's own operations.

When and how much will the internet of things will contribute to Hitachi earnings? "We aim to explain when we announce our full-year results," Nishiyama said.

Hitachi also said it will withdraw from uranium enrichment technology development in the U.S. With demand for nuclear power seen missing initial estimates, the company will divert the freed-up resources into other fields.

Hitachi plans to book a roughly 70 billion yen impairment loss on the enrichment technology business this fiscal year, 20 billion yen more than initially projected. This has led Hitachi to keep its forecast of a 16% increase in net profit to 200 billion yen, despite the upgrade in operating profit.