How a Shanghai businessman pulled Honma Golf out of the rough HONG KONG -- After Donald Trump won the U.S. presidential election in 2016, Japanese Prime Minister Shinzo Abe gave him an expensive Honma Golf club to congratulate him. It was a nice endorsement for the Japanese company, known as a premier maker of clubs with the highest standards of "Made in Japan" quality.

It may come as a surprise, therefore, that for the past eight years the company has been owned and successfully run by a Shanghai businessman.

Founded in 1959, Honma Golf fell on hard times with the collapse of Japan's bubble economy in the 1990s. It had overinvested in golf courses and made other missteps. In 2005, it filed for bankruptcy protection, and in 2010 -- in what many Japanese viewed as a painful indignity -- it was bought by a Chinese fund run by businessman Liu Jianguo. Liu also operates a Shanghai company that makes hair dryers and rice cookers.

Yet Liu, who became Honma Golf's chairman after the acquisition, successfully turned the company around by revamping its sales strategy. Along with home appliance retailer Laox -- bought by China's biggest electronics retailer in 2011 -- Honma Golf is a prime example of a prominent Japanese company revitalized by a Chinese parent.

It is also a stark case of role reversal for the two countries. For decades, Japanese companies have been setting up and running businesses in China. But the number of opposite cases could probably be counted in single digits.

Under the new leadership, Honma Golf has become less dependent on its company-owned stores. It has begun supplying the products made at its plant in Sakata, northeastern Yamagata Prefecture, to large sporting-goods chains such as Xebio and Golf5. More than 60% of its sales are now through third-party retailers. The company has been listed on the Hong Kong Stock Exchange. In January, Honma Golf entered into a capital and business partnership with Japanese trading house Itochu to develop its apparel business.

Liu has also positioned the company to tap into the vast potential of the Chinese market. While China has a population of around 1.4 billion, fewer than 1 million play golf and there are only 500 golf courses in the country, Liu notes. By comparison, 28 million people play the game in the U.S.

In an interview with The Nikkei, Liu said the key to reviving Honma Golf was combining Japanese manufacturing skill with Chinese salesmanship.

"The quality of Japanese manufacturing is famous around the world, but its marketing is a bit weak," he said, adding that combining the two countries' strengths benefits both. 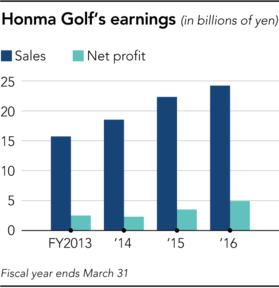 In January, Honma Golf entered into a capital and business partnership with the Japanese trading house Itochu to develop its apparel business. Liu was introduced to Itochu by the Thai conglomerate Charoen Pokphand Group, an Itochu business partner.

To grow in China, part of the challenge is that golf suffers from an image problem due to the anti-corruption campaign of President Xi Jinping. The game is seen as a luxury activity pursued by people with too much money. But Liu believes in the huge potential of China. "Golf has become an Olympic sport, and there are more and more young people playing golf in China."

He said Honma Golf's technology, developed over many years, has created a foundation for its own recovery. In taking over the company however, building effective relationships was critical.

Liu decided not to send anyone from China to run the business, instead giving Japanese executives more freedom. Employee incentives and other personnel and pay schemes were also important in building morale. 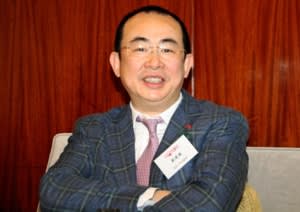 "The most important thing in buying and operating a Japanese company is trust," he said.

The company is now looking beyond Japan and China, aiming to raise its profile in Western markets as well.

It has introduced a "Trump" series of golf clubs in the U.S. and Europe. inspired by the set given to the U.S. president by Prime Minister Abe. There have so far been around 30 orders in the U.S. and 10 in Europe for the pricey clubs, which go for around $50,000.

Chief Financial Officer Bian Weiwen also sees opportunities in the West, noting that lightweight carbon shafts are gaining popularity in the U.S. and Europe, where the average age of golfers is over 50. There are also many women playing the game, an opportunity for Honma Golf, which excels in women's products.

In the six months from April to September, the company's sales nearly tripled in the U.S. to about $5.6 million from the same period a year earlier.

Working with Itochu, Liu also wants to strengthen the company's apparel business, which has not been a priority. He plans to introduce functional items that screen out ultraviolet rays and keeps golfers warm on cold days.

"Itochu's strength in the apparel business is very attractive," Liu said. "Honma Golf has a high-end brand image, and golfers expect functionality in our apparel items as well."