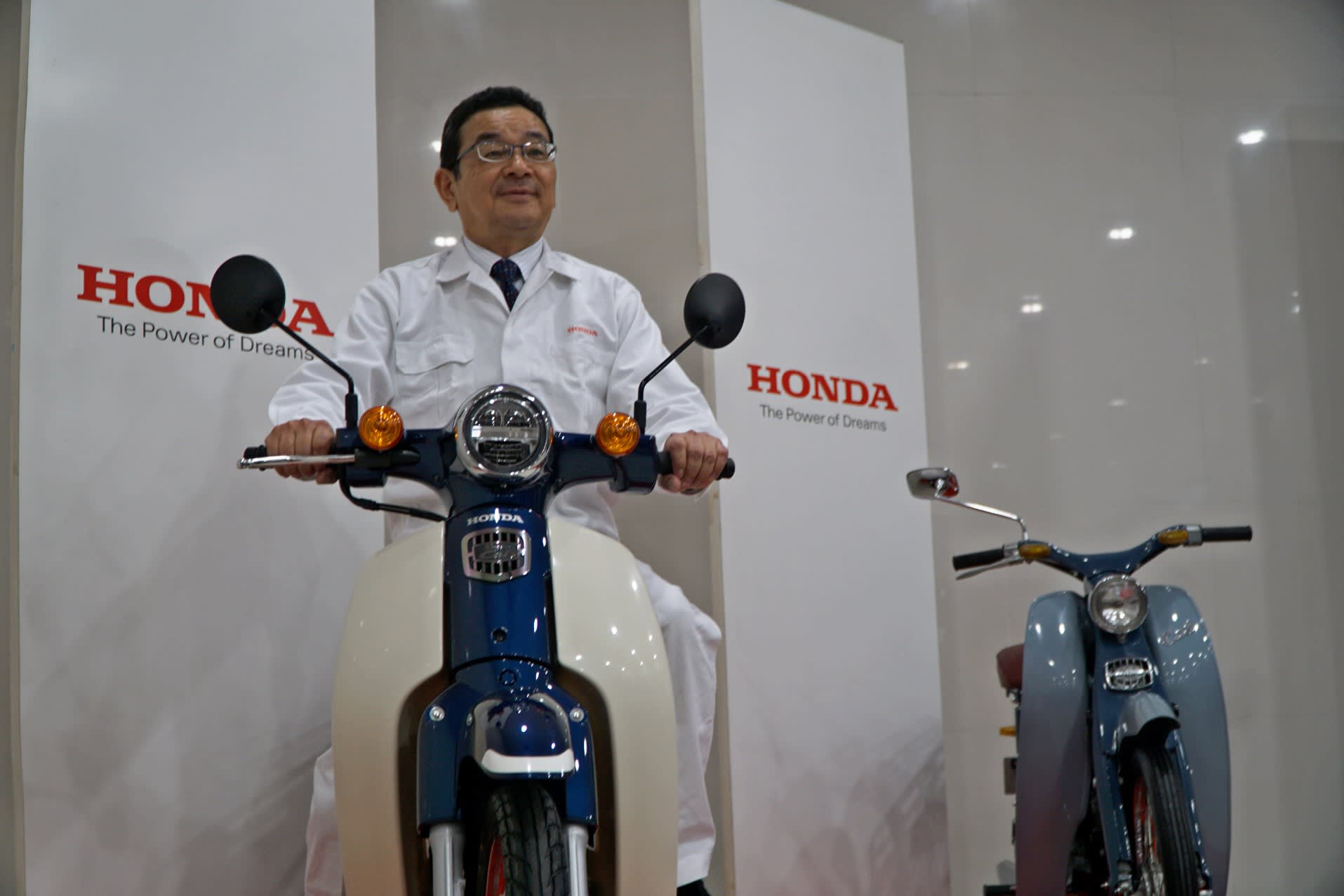 TOKYO -- Honda Motor recently churned out the 100 millionth Super Cub, a versatile motorbike whose underlying qualities over its six decades have put a stamp on the company.

"The Cub embodies the feelings of the original founder," President Takahiro Hachigo said at a commemorative event Thursday at the Kumamoto plant. "Two-wheelers remain central to our business," he said.

Toyota Motor's Corolla ranks as the world's top-selling car, moving about 45 million units from its 1966 debut to the end of this past August. The Volkswagen Golf comes in second at 33 million.

The 100 million tally puts the Cub in a class by itself. And the two-wheeler journeyed this far by repeatedly changing roles.

When the Cub came out in 1958, Honda had finally made a name for itself with the Dream E-Type, a four-stroke motorcycle designed by founder Soichiro Honda with an overhead valve system.

But the company ran into in financial trouble amid overproduction. Soichiro sweated over designing a motorbike that "even a soba shop boy could ride," giving birth to the Cub.

The motorbike proved a smash hit, and the design concept defined the essence of the company. In short, a Honda should be compact, sturdy, affordable, and above all else easy for anyone to operate.

Honda also added "sporty" to its repertoire, thanks to the influence of Formula One racing. But Soichiro's soba shop boy still undergirds its offerings. The Civic, its best-selling car, is made specifically for the mass market.

Even the recently developed HondaJet is compact and affordable for an aircraft. One could call it an airborne version of the Cub or the Civic.

The many hats of the Cub

Having run out of space at the Saitama and Shizuoka plants, Soichiro decided to build a large production center dedicated to the Cub. He wanted it close to a Toyota facility as motivation for the rank and file to "one day" overtake the competitor.

After evaluating candidates, Honda decided on a site in Mie Prefecture close to Toyota's Aichi Prefecture stronghold. Soichiro had grown weary of the wining and dining by local officials looking to attract the plant. But the mayor of the winning city, Suzuka, struck a chord upon offering to take the founder right to the proposed location after merely an obligatory cup of tea.

The Civic transformed Honda from a motorcycle manufacturer to an automaker. The shift also redefined the Cub's place in the company's strategy. When Honda expanded production to overseas locations in the 1980s, it adopted a two-step game plan of establishing its brand with two-wheelers and then going on the offensive with four-wheelers.

Honda was the first Japanese automaker to turn out vehicles in the U.S. Its first American factory, in Ohio, initially produced motorcycles.

In the 1990s, the Cub morphed again into a linchpin for developing emerging markets. It took off in Southeast Asia, becoming the vehicle of choice for the masses. Motorbikes eventually became synonymous with Honda. Such places as Vietnam even coined phrases meaning "Honda standard," the yardstick against which all other bikes were measured.

The Cub was overshadowed by autos in the 2000s but showed its true worth as a supporting character later that decade. The 2008 global financial crisis wiped out an estimated 30% of global vehicle demand, yet the Cub still sold in Asian emerging economies. Even as Toyota and Nissan Motor bled red ink for the fiscal year ended March 2009, Honda turned a profit thanks to the Cub.

Now the question is whether Cub-inspired design themes have retained their vitality. At the very least, the car company has not lately rolled out offerings widely said to excite customers. The Fit subcompact has been subject to multiple recalls, most recently this year.

Hachigo, who took the reins two years ago, uses the word "Hondaness" when elaborating on the company's management policy. But the vision does not appear to be reaching younger demographics. Honda may need to rework its image instead of leaning on a storied legacy.