Japan Inc's $2bn in cash begins percolating up to space TOKYO -- ANA Holdings is getting into the space business. It also might be signaling the beginning of a Japanese corporate investment trend.

The parent of All Nippon Airways on Friday said it had invested 300 million yen ($2.66 million) in Astroscale, a venture out of Singapore.

The deal could be a harbinger in a number of ways. For one thing, it could mark quite a change for Japan, where space exploration has always been the domain of government agencies.

And that change could prove attractive to Japanese companies having a hard time figuring out how to make good use of their growing cash reserves. 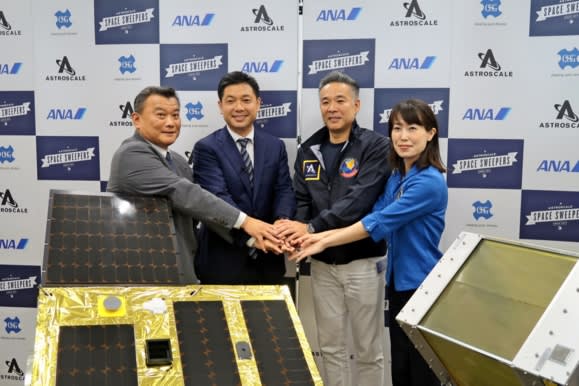 Toyoyuki Nagamine, senior executive vice president at ANA Holdings, described the investment in Astroscale as a great opportunity to share the pool of expertise the carrier has accumulated through its airline operations.

At Friday's announcement, Nagamine recalled that ANA was a startup to begin with. "Six decades ago, we started with only two helicopters and the venture spirit," he said. "We have been inspired to make the investment by [Astroscale's] commitment to tackling the tough space debris problem."

Astroscale was founded in 2013 by Japanese entrepreneur Nobu Okada, who wanted to make a business out of removing space junk -- old satellites, spacecraft parts and tiny remnants of these parts.

It has established a Japanese unit in Tokyo that serves as a research and development center.

Okada launched the company after working for the Japanese Finance Ministry and major consultancy McKinsey & Company.

Okada first became intrigued by the space debris problem at an academic conference on space exploration.

Astroscale's business at the moment is apparently generating little in the way of sales. The company is planning to launch satellites in 2018 and 2019 to monitor and deorbit space debris. It sees itself rolling out commercial services in 2020. The startup has raised some 2.8 billion yen from Japanese investors, including cutting tool maker OSG.

Astroscale estimates roughly 750,000 pieces of debris greater than 1cm in diameter orbit the earth today -- along with over 100 million smaller specks.

Even the tiniest of these particles could pose serious risks to satellites and spacecraft. They can travel at speeds up to 8km per second, or over 25,000kph, 100 times faster than Japan's bullet trains. At these speeds, a collision could heavily damage a commercial satellite.

"Spacecraft sometimes has to change its orbit to avoid space debris," Japanese astronaut Naoko Yamazaki said last week at the press conference ANA held to announce its investment. "Even minor damage could lead to a grave accident. And the huge maintenance costs involved represent economic losses.

"A decline in monitoring accuracy due to damage caused to satellites would have a direct impact on our safety here on Earth, affecting, for instance, autonomous driving."

Progress in rocket technology is ushering in an era of "mega constellations" made up of thousands of satellites. These constellations will serve as infrastructure for new businesses, such as accurately monitoring the positions of autonomous agricultural and construction machinery.

As the number of satellites orbiting the earth increases, the risks of accidents involving debris also grow.

Astroscale thinks its services will be essential. It envisions a commercial service of removing space junk, although it has yet to come up with a specific fee scale.

ANA Holdings has a lot of money to invest. Its group net profit for the year ending in March 2018 is estimated to be 125 billion yen, up 26% from the previous year.

Its actual capital spending pales in comparison to its swelling cash reserves. The company's cash and cash equivalents were at some 310 billion yen at the end of this past March.

It is not alone in this regard. The total of cash and deposits held by Japanese companies excluding financial institutions stood at 267 trillion yen at the end of fiscal 2016. They have been steadily growing since fiscal 2010, when the amount surpassed 200 trillion yen for the first time, according to the Bank of Japan.

Although Japanese companies are ramping up their spending on acquisitions, the BOJ numbers indicate many are failing to work their money efficiently.

Space is emerging as a promising new receptacle for their cash.

The Japanese government's annual space budget is around 300 billion yen, far smaller than the expenditures by major Western countries.

Corporate Japan is also investing in another space startup, Axelspace, which was spun off from the University of Tokyo. The venture is developing Earth-monitoring services using microsatellites and has raised some 2 billion yen from Japanese companies, including trading house Mitsui & Co., satellite broadcaster Sky Perfect JSAT and Weathernews, a meteorological information provider.

Yuya Nakamura, founder and president of Axelspace, says the investors are betting on his company's vision that new space infrastructure can change the world.

Axelspace will launch its first satellite in December and plans to have 50 microsatellites weighing 80 kilograms in orbit by 2022. The network of small satellites will be used to sell visual data collected at low costs for use in agriculture and other sectors.