TOKYO -- For a growing number of Japanese, the ultimate pop idol is made not of flesh and bone, but pixels.

Virtual pop stars are available for their fans 24/7, just the tap of the smartphone screen away. They don't upload fantasy-shattering photos to Instagram, and they never become embroiled in all-too-human scandals.

Helping give the virtual idol genre extra momentum recently is Yasushi Akimoto, a renowned Japanese producer known for his role in creating the massively popular AKB48 teen girl group and other pop stars. After minting a series of real-life pop sensations, he decided to try his hand at the world of make-believe.

Collaborating with Sony group companies Aniplex -- an anime and music production house -- and Sony Music Records, Akimoto created the digital idol group 22/7, pronounced "nana-bunno-nijuuni." At a press event announcing the project, Akimoto said social media has made it nearly impossible for idols to live up to the standards of perfection set by their fans.

"These days, the likes of Instagram and other social media platforms lay bare the raw reality of idols. Image-building is no longer a viable strategy," Akimoto said. "So I said, 'I'm going to create fictitious idols.'"

In the Japanese entertainment world, the fusion of 2-D and reality is becoming increasingly common. Take, for example, the recent trend of "2.5D musicals," in which human performers play the roles of anime characters on the stage. 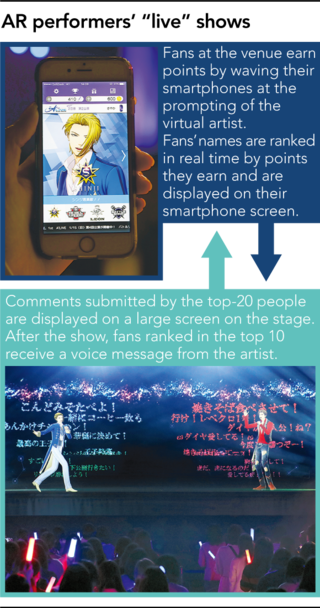 But more often, the human element is removed completely. Teens now flock to concerts where animated 2-D performers show off their dance moves while belting out pop hits.

The "AR performers" are a good example of this phenomenon. ARP, as they are called, is an animated male pop group that employs augmented reality technology. Yui Osaka, a self-employed woman living in Chiba Prefecture, near Tokyo, attended one of their concerts in January.

"Messages from fans were displayed on the screen [on the stage]," the 31 year old said. "I liked the way they made it feel like everybody was involved in the show."

ARP comprises Shinji, Leon and a duo called Rebel Cross. The characters on the screen may be digital, but it is humans who give them their mojo. Professional singers lend them their stellar pipes, and the stars' slick moves are digitally captured from real dancers.

Yuke's, the company behind ARP, says it aims to create "talent with an overwhelming appeal that no living human can duplicate," including unparalleled dance moves and singing skills.

The ARP live experience is designed to be highly interactive. At concerts, for example, the virtual artists compete to be the fan favorite. Using an app called Furefure, fans can register their favorite character for a fee before the show. During the performance, they give their idol of choice "supporting points" by launching the app and waving their smartphones.

Fans, too, are ranked in real time by the number of points they contribute. Those with the highest scores receive various rewards, such as having their fan messages displayed on the screen, hearing their names called out by the virtual artists from the stage, or receiving a voice message from their favorite artist on their smartphones after the show.

Another project is Dream Festival!, better known as Dorifesu!. 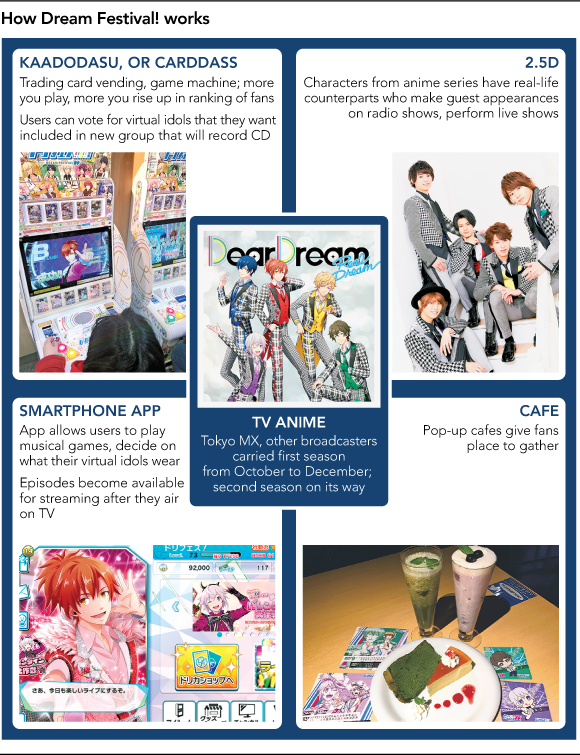 Involving several companies, including Bandai and Amuse, the Dorifesu! project is essentially a TV anime franchise built around a story of a group of new male idol singers who develop as artists.

In addition to a TV show, there is an arcade game and a related app. Young human performers who provide the voices for the virtual characters are also brought together to perform at shows, and pop-up cafes are set up to stage virtual "live" performances.

For many fans, a big part of the appeal of these virtual artists is that they never ruin the fantasy of perfection by getting married or involved in scandals.

"2-D idols never betray fans," said a 34-year-old female professional in Tokyo. "I can be a fan without having any worries."