TOKYO -- Have you ever been a foreigner in Tokyo, clueless about what your helpful Japanese friend was saying? An online music video featuring a confused Asian tourist in Tokyo and his new Japanese friends has become a global sensation, collecting millions of views on popular video platforms and prompting viewers around the globe to create and share their own versions.

The 5-minute video, named "Tokyo Bon 2020," features a clueless Asian tourist, performed by Malaysian actor Namewee, wandering on the streets of Tokyo. His hilarious interaction with a Japanese lady and a high school girl who speak "Japanglish" -- English words that have been assimilated into Japanese, often taking on somewhat different meanings -- is the highlight of the video.

For a native English speaker, the Japanglish words might sound a bit surreal, like something out of a magic spell: "Makudonarudo" (McDonald's), "Kitto Katto" (Kit Kat), "Dizunilando" (Disneyland) and so on. In the song, these words are repeated in a catchy tune along with some Japanese doing "Bon-odori," a dance often performed at summer festivals in the country.

If you are a non-Japanglish speaker, don't worry -- subtitles in Japanese, English and Chinese are shown in the video. It also features figures and tourist spots that symbolize Japan, such as the landmark Tokyo Tower, a sumo tournament, a Japanese-style garden and performers dressed as ninjas.

The video was released on YouTube last November and went viral in China first, where the clip was shared on various social media platforms, including Weibo. Its popularity expanded to other Asian countries and regions including Hong Kong, Taiwan and Southeast Asia, before it was picked up by 9gag, a social media platform popular in the U.S. and Europe, that brought in 12 million views in just two days. Total views across all platforms now exceed 100 million. 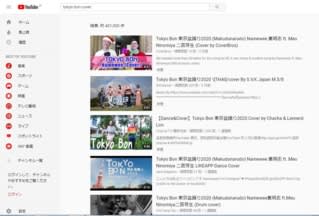 Many viewers have posted their own versions of ‘Tokyo Bon’ video on YouTube.

In a telephone interview with the Nikkei Asian Review, the company's CEO Shunji Akamine said the company is already receiving business inquiries from both inside and outside Japan. "There is a souvenir manufacturer that wants to create new products with us featuring [characters from] the video. The artists in the video are getting requests to perform at school and company events overseas," said Akamine.

Akamine said there is often a gap between what Japanese companies want to promote overseas and what foreigners want to see from Japan. "We wanted to create something that is funny and relatable to foreigners, and see how much buzz we can create around it," said Akamine.

The ultimate aim of the video is to promote Japanese culture and tourism, according to Akamine. The number "2020" in the video's title refers to the year the Olympics will be held in Tokyo. The Japanese government is aiming to increase annual tourist arrivals to 40 million by 2020.