Kao, a Japanese consumer products maker, sells a lot of Merries disposable diapers in China, which has helped it increase its total online transaction volume 20-30% in China over recent years. In Indonesia, the company is gaining ground on its global rivals by formulating its laundry detergents for local conditions.

When he announced in December 2016 Kao's medium-term business plan through 2020, CEO Michitaka Sawada said he wanted the company to become a top-three player, alongside Procter & Gamble of the U.S. and Anglo-Dutch Unilever, by 2030. To achieve that ambitious goal, Kao must expand its market share overseas, including in China.

Things are going well so far. While some of its rivals rely on discounts as high as 50% to pump up sales, Merries sell well even with small discounts because "Chinese consumers perceive Merries as a premium product," said one industry insider. 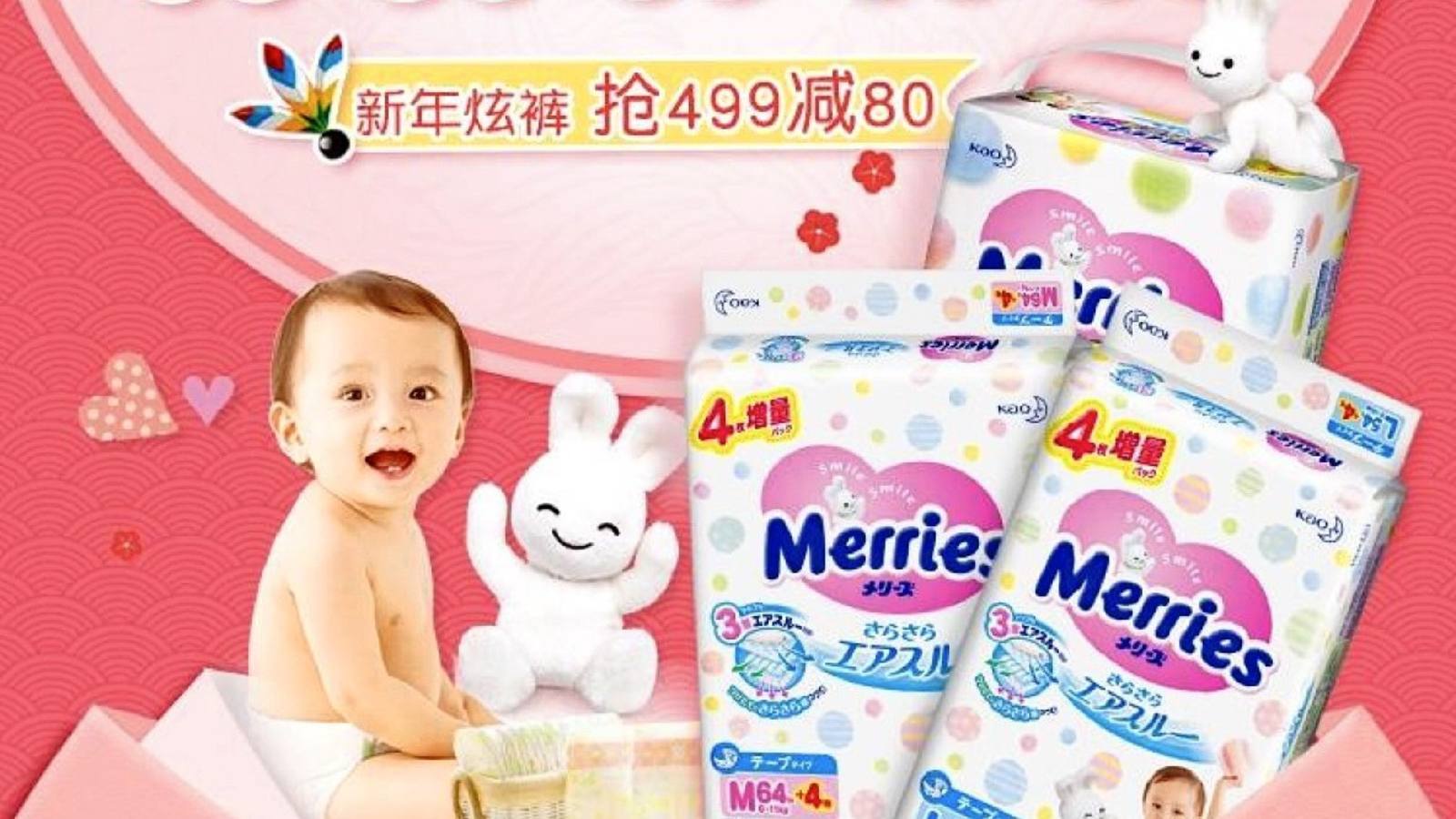 Kao's Merries brand diapers, shown here at a supermarket in Japan, have a premium brand image in China.   © Reuters

According to U.K. market researcher Euromonitor International, Kao had a 12% share in the Chinese disposable diaper market in 2016, less than half that of P&G, at 25%. But Kao appears to be No. 1 in the online sales channel, which includes the e-commerce site of Alibaba Group Holding, which Kao has been in a tie-up with since 2015. On the website operated by JD.com, another big online retailer, Kao has long topped the sales ranking for disposable diapers, despite prices that are about 50% higher than the average.

Merries, which were introduced in China in 2009, have won a following with new parents because of their smooth texture, careful design and comfortable fit. They proved such a hit that a few years ago, Chinese merchants were coming to Japan in droves to buy them in bulk from local stores, causing some to run out.

The cross-border tie-ups with Chinese online retailers such as Alibaba have been a winner, with Kao's sales volume more than doubling on the year in 2017. "We have established a brand image of reliability and safety, and we want to lead the group in both sales and profit," said Minoru Nakanishi, who runs Kao's Chinese business.

Kao still relies heavily on domestic sales, unlike P&G and Unilever, which generate 60-80% of their sales overseas. At Kao, the figure is around 30-40%.

While Kao's success in China owes much to its premium image, Sawada prefers a down-to-earth approach. He believes the company should focus on local consumers and develop products to meet their needs. "In principle, our approach is to develop locally tailored products and sell them locally. To do this, we are seeking to work with local businesses and universities on product development," Sawada said.

Another Kao success story, in Indonesia, reflects this approach. In 1992, Kao began selling laundry detergent in the country. The company conducted an exhaustive study on how Indonesians wash their clothes, knowing that formulating a good detergent depended on understanding such things as how common washing machines are in the country and the quality of the water.

The research revealed that many Indonesians hand-wash their clothes in water with a high mineral content. The findings were incorporated into the development of Attack Jaz1 detergent. The product, which was introduced in 2014, was a hit.

Kao came up with another product designed especially for washing traditional and formal clothing worn on special occasions such as weddings and funerals.

The company estimates its share of the Indonesian detergent market at around 15%. It is quickly gaining on Unilever, whose share exceeds 20%.

P&G has research and development centers in China, India and Singapore. In Singapore, it opened a digital marketing research center in 2017, spending an additional $100 million or so to develop products for local markets. Unilever also opened an R&D center last year in Singapore, where it aims to work with local partners.

Kao, which conducts R&D mainly in Japan, may need to do the same.