Mazda pushes own back to wall with US production plan

TOKYO -- Mazda Motor has put some serious pressure on itself with its decision to resume auto production in the U.S.

The Japanese company will build a $1.6 billion assembly plant with Toyota Motor in the state of Alabama, with the partners aiming to bring the facility onstream in 2021. This will mark Mazda's first U.S. production since its joint venture with Ford Motor stopped manufacturing the Mazda 6 -- a midsize sedan known as the Atenza in Japan -- back in August 2012.

Mazda executives already seem to have a do-or-die mentality, due to concerns that the Alabama factory could leave the automaker with excess capacity.

The company plans to increase new car sales by 50,000 units a year. If things go according to plan, "all Mazda plants will be operating at a capacity utilization rate of 100% in 2021," Executive Vice President Akira Marumoto said.

Adding the new factory that year would allow Mazda to ramp up sales further. But there is doubt as to whether Mazda can regain sufficient sales momentum in the U.S.

The carmaker sold 280,000 vehicles stateside in 2017, down 3% from the previous year, according to Autodata, an American industry tracker. The slide was steeper than the 2% contraction of the overall U.S. market.

Mazda is well-aware of its marketing weakness in the U.S. It has stopped offering deep discounts for fear of tarnishing its brand, and shifted its emphasis to "quality" from "quantity." In spring 2016, it restructured its U.S. sales units to support the new strategy. That July, Mazda revamped its sales incentive program and introduced new performance standards -- such as customer satisfaction -- in place of the number of vehicles sold.

Such reforms have at least helped to bring existing customers back: Mazda's repurchase rate has risen above 50%, from nearly 40%.

When making the changes, Mazda took some strategic inspiration from Subaru, which has successfully carved a niche in the U.S. But Subaru's big leap there came as auto sales were rebounding after the global financial crisis of 2008, together with the declining yen against the dollar; Mazda cannot count on that kind of tail wind.

On the contrary, Mazda is facing head winds, as U.S. demand is shifting away from the company's wheelhouse -- toward big pickup trucks and SUVs.

Regardless, the Alabama plan is already in motion, a Mazda executive said. "We have no choice but to reach our destination safely."

Additional quality-focused marketing reforms are in the pipeline.

"Our number of dealers has decreased by 30 or so, because we have sorted them out to pick the ones that understand Mazda's brand value-focused management," Marumoto said. "We will spend to reinforce their selling capacity." 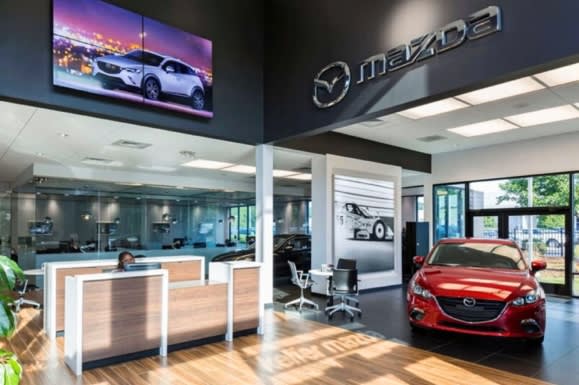 Over the coming three years, the company intends to open dealerships in areas that lack them, and refurbish existing ones, Marumoto said. The idea is to shore up its marketing power before the Alabama plant opens.

North America is Mazda's most important market, accounting for nearly 50% of its operating profit.

Mazda must "generate steady results in the U.S." if it is to assuage concerns about a future production glut, said Koichi Sugimoto, a senior analyst at Mitsubishi UFJ Morgan Stanley Securities.

For now, Mazda is actually coping with a shortage of new cars, and will continue to do so until the release of vehicles with second-generation Skyactiv environmental and safety technologies in the second half of the fiscal year through March 2019.

Investors' initial response to the Alabama plan was positive. On Wednesday, when the move was reported, Mazda's stock rose 2% on the day to 1,602.5 yen, boosting the company's market capitalization back to the 1 trillion yen ($8.94 billion) level for the first time since Nov. 7.

But automotive stocks, including Mazda, have also been attracting investors who are targeting market laggards. If Mazda continues to struggle in the U.S., the market will begin to see the Alabama plant as a burden on its management -- and react accordingly.