McDonald's Japan upgraded its full-year net-profit forecast by 5.5 billion yen to 20 billion yen, up 270% on the year and the highest ever since the company went public. This marks a second upgrade for this year. Full-year sales are now seen rising 10%.

A revamp of the fast-food chain's menu helped increase customer traffic. A new series of large burgers developed specifically for the Japanese market proved popular, as did limited-time dessert items. 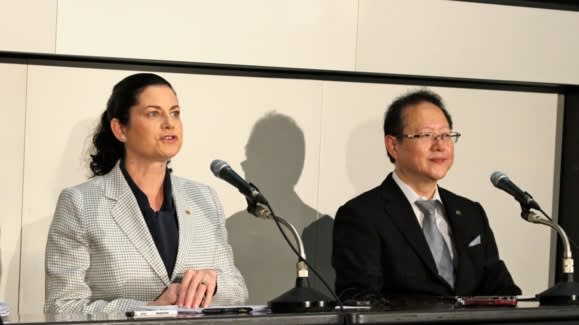 President Sarah Casanova, left, says the company is ready to shift focus from recovery to growth.

Casanova told reporters the company is back on a growth track although earnings have not fully recovered. Factors outside the core business buoyed the first-half profit significantly. For example, the company has received a settlement from the Chinese supplier of tainted chicken behind the 2014 scandal.

Since logging its biggest-ever loss as a public company in fiscal 2015, the burger chain has carried out its recovery plans focusing on renovations. Now, in view of brisk earnings, it will shift gears and step up growth-focused investment.

McDonald's will speed up renovation this year and store openings next year. At the start of the year, the company planned to renovate 350-400 locations. But now the range has been upgraded to 475-500. This means more than 80% of all locations will get a new look by the end of the current year, moving up the target to complete renovation of around 90% of locations by the end of next fiscal year.

Expansion is another initiative. The number of branches has been declining for nearly a decade, with 130 money-losing locations closing in 2015. But next fiscal year, new openings will surpass closures, leading to the first increase in total store count since 2008.

Now that the business foundation is in place, the company will increase investment further and offer customers the best experience, Casanova stressed as she spoke to reporters Wednesday.

McDonald's still faces the challenge of retaining family customers, who tend to help increase traffic. It will also work to enhance patrons' convenience. For example, a 23-year-old student in Nagoya who eats at McDonald's a few times a month says a smartphone app has encouraged more visits. The company plans to introduce cashless payments at many locations this year as well.

The projected net profit for the year would set a record, but that is partly thanks to such non-operating factors as a reduction in reserve funds to cover for any loan defaults by franchise operators. Profit from core operations is projected at 11 billion yen -- short of the net profit target of 20 billion yen.