TOKYO -- Japanese police on Friday questioned Harumafuji, one of Japan's four reigning sumo grand champions, over allegations that he seriously injured a junior wrestler outside the ring last month.

The 33-year-old wrestler repeatedly punched Takanoiwa, a 27-year-old fellow Mongolian, as punishment for his "poor attitude," leaving him with a concussion and perhaps a fractured skull as well as other injuries. Police are considering launching a criminal investigation. Perseverance pays off for a homegrown sumo star

Professional sumo wrestlers are ranked from grand champion, or yokozuna, all the way down. This rigid hierarchy in the past led to institutionalized bullying of junior wrestlers in the name of training.

The incident has shown that the culture of violence still plagues Japan's ancient sport, despite efforts in recent years to get rid of it. The incident came as sumo was beginning to regain its footing after years of falling popularity amid scandals and corruption.

The incident also elicited a slow response from the Japan Sumo Association, the sport's governing body, raising questions about the group's ability to deal with the problem without external intervention. 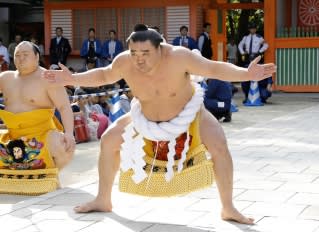 Harumafuji, a 33-year-old Mongolian, is a nine-time winner of grand sumo tournaments, including the latest one in September.   © Kyodo

Sumo has been enjoying a resurgence of interest. The number of spectators at tournaments rose to 760,000 in 2015 from about 300,000 in 2011, when the sport was rocked by scandals, including bullying, game-fixing and illegal betting. In 2007, a 17-year-old wrestler died after being beaten by three senior wrestlers with a baseball bat. The three were later convicted in a criminal case.

The industry has worked hard to revamp the sport, bringing outsiders into the governing body and modernizing practices.

Fans greeted the news with shock. Harumafuji, whose real name is Davaanyam Byambadorj, won the last tournament in September and it was hoped that his presence would reinvigorate the tournaments that have been dominated in the past 10 years by Hakuho, the 32-year-old fellow Mongolian and grand champion.

The news of the assault came to light Tuesday, almost three weeks after it took place on Oct. 25-26 in a drinking venue during a local tour in Tottori, western Japan.

There is still conflicting information about what exactly happened in the incident, at which other Japanese and Mongolian wrestlers, including Hakuho, were present. According to eyewitnesses, Harumafuji lost his temper when Takanoiwa tried to answer his cellphone while Harumafuji was scolding him for lack of respect. Harumafuji punched Takanoiwa in the face 20-30 times, and pushed down Hakuho, who tried to break them up.

Some said Harumafuji struck the victim on the head with a beer bottle, before going on the punching rampage. Hakuho said that no beer bottle was involved in the assault.

Takanoiwa was later hospitalized and had to forego the November sumo tournament -- the sixth and last of the year -- which began in Fukuoka on Sunday. Harumafuji withdrew from the competition two days into the 15-day tournament.

Harumafuji has apologized for the assault, but many think the incident could put an end to his career.

The attacker and the victim belong to different stables. The victim's coach and stable master reported the case to police, but did not notify the association immediately. This has led to allegations that the stable master, who is also a senior member of the association, tried to keep the issue under wraps so that the November tournament would proceed as scheduled without problems.

The association looked into the incident after it was notified about it by police Nov. 2, but took no further steps.

It was also discovered that the victim had kept the incident to himself and had told his stable master that he had been injured in a fall, an indication of the sumo world's culture, which prohibits juniors from reporting on any wrongdoing by seniors.