Pretax profit up 24% at Japanese companies in April-June The tabulation by The Nikkei looked at the 1,298 nonfinancial companies that had released quarterly earnings by Friday and which close their books in March. These businesses account for 85% of all listed companies and 97% of total market capitalization.

Total net profit at these companies climbed 28%. Fiscal 2015 pretax profit is expected to grow 8% to another record high.

Major U.S. companies saw April-June profits sink around 10%, while European businesses logged only slight growth. "Growth in Japan beat market forecasts, so money should tend to flow there rather than to the U.S., where there was a bit of an undershoot," said Yoshinori Shigemi, a strategist at J.P. Morgan Asset Management.

Stock markets showed a similar gap. The Nikkei Stock Average advanced 8% between the end of March and Friday, nearing a year-to-date high, while U.S. and German share prices fell over the same period.

The sharp increase in Japanese companies' profits largely owes to a weak yen swelling yen-denominated earnings. The Japanese currency had softened from 102 to the dollar in April-June 2014 to 121 a year later. Combined with brisk business in North America, this pushed up profits considerably in the automotive and electronics industries, which accounted for nearly 30% of total growth. Toray Industries' pretax profit soared 72% to 38.5 billion yen ($306 million) on stronger North American sales of carbon fiber for aircraft.

Domestic-demand-reliant companies also enjoyed a recovery. At nonmanufacturers, many of which fall into that category, April-June profit grew just over 20%. While earnings had been sluggish in the wake of the April 2014 consumption tax increase, the impact of the demand drop-off after the pre-hike surge has waned. Price hikes also filtered into the market while raw material costs declined.

Real estate developer Mitsui Fudosan's pretax profit skyrocketed some 90% to an all-time high due to an increase in rental income and higher traffic at commercial facilities. "There was also strong interest in buying condominiums, mainly in urban areas," observed managing director Masatoshi Satou. 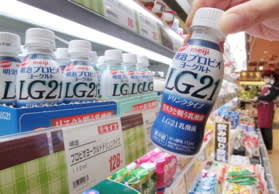 Mobile carrier KDDI's average monthly revenue per user rose as more customers used multiple devices, according to president Takashi Tanaka. Food giant Meiji Holdings reported profit growth of nearly 60% thanks to price hikes in April on yogurt and other products. Nippon Express logged record profits amid a recovery in drink and other shipments after a post-tax-hike slump.

Cheap crude oil was a boon to businesses importing resources from overseas. Diversified chemical companies such as Mitsubishi Chemical Holdings, Sumitomo Chemical and Asahi Kasei reported record profits across the board. The falling price of naphtha, a petrochemical feedstock, widened profit margins.

Profits rose in 29 out of 31 industries as the weak yen, low crude oil prices and the end of the post-tax-hike slump benefited a wide range of companies. The aggregate pretax profit margin came to 7.6%, the highest level in the past 10 years.

Many companies' fiscal 2015 forecasts assume average exchange rates of 115 yen to 120 yen to the dollar. If the Japanese currency stays around its current level between 124 yen and 125 yen, profits will probably be lifted even higher.