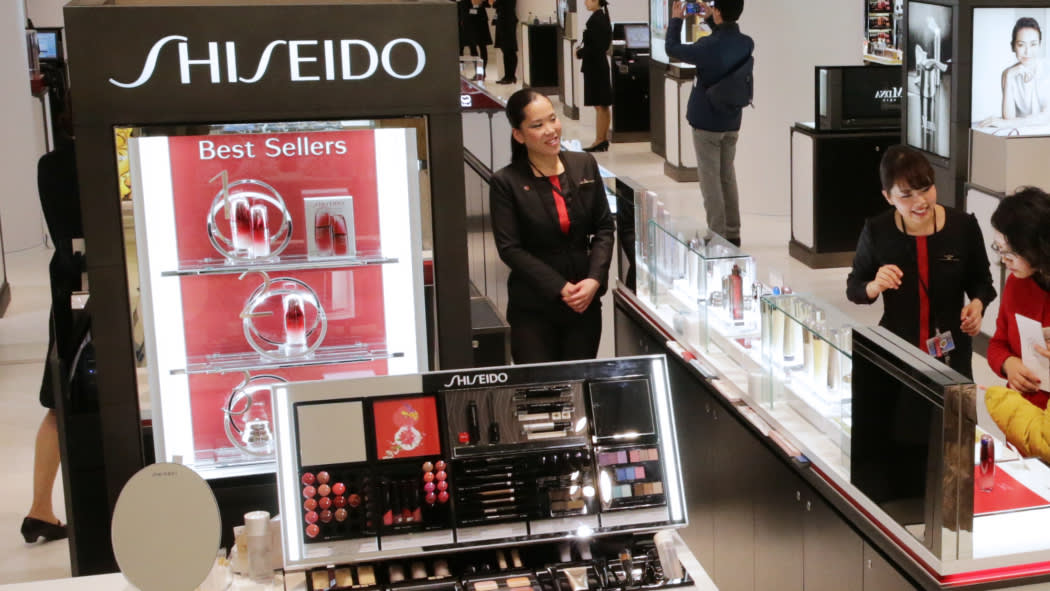 Shiseido's 8% ratio of profit to sales is much lower than those of major overseas competitors.
TAKAYUKI KIKUCHI, Nikkei staff writerFebruary 12, 2018 21:50 JST | Japan
CopyCopied

TOKYO -- Shiseido logged more than 1 trillion yen ($9.19 billion) in consolidated sales in the business year ended in December, hitting a target that had been set for 2020.

The stronger-than-expected result enabled the leading Japanese cosmetics maker to post an all-time high operating profit of 80.4 billion yen, much higher than the previous record of 63.4 billion yen set in the year ended in March 2008. The Tokyo-based company changed its book-closing date from March 31 to Dec. 31, effective in 2015.

"When we worked out the [sales] plan three years ago, many employees wondered if we could complete it," Shiseido President and CEO Masahiko Uotani said Thursday, releasing the company's earnings report. "They are now confident, with a 'can-do' attitude."

The strong result for 2017 is attributable to Shiseido's global strategy of promoting high-priced products, such as its SHISEIDO and Cle de Peau Beaute brands.

But one Japanese brokerage house analyst said Shiseido "shouldn't go wild with joy," noting that the company needs to rebuild its business in North America.

Shiseido has been promoting a marketing strategy which lets Chinese tourists pick up SHISEIDO and other high-end cosmetics and encourages them to purchase the products when they return home, and at duty-free shops in Asian countries. The company registered a profit gain of 41.5 billion yen through three businesses -- retailing in Japan and China, and duty-free shops and other travel retail outlets.

But operations in the Americas and Europe performed poorly, incurring a combined operating loss of 13.4 billion yen and eating into profit generated in Japan and other Asian markets.

Deep in the doldrums

The business in the Americas especially is deep in the doldrums. It narrowed its operating loss in the 2017 business year, but remained 10.2 billion yen in the red, testifying to its much weaker earnings compared with other operations. This was due largely to the poor performance of Bare Escentuals, a U.S. maker of cosmetics based on natural ingredients which Shiseido purchased for $1.9 billion in 2010.

"Investment needed for growth has been difficult while booking annual goodwill write-downs of 9 billion to 10 billion yen," Uotani said.

Now that impairment losses have reduced the book value of goodwill, the expense of amortization will become unnecessary. Bare Escentuals is starting to make a strategic shift towards the closure of ailing stores under direct management and aggressive investment to reinforce online sales.

In October to December 2017, Bare Escentuals posted a year-on-year gain of 7% in e-commerce "over-the-counter" sales, enabling the business in the Americas to climb into the black in the quarter and show signs of bottoming-out.

Shiseido "is about to step on the first rung as a global company," said Wakako Sato, a senior analyst at Mizuho Securities.

In terms of market capitalization, however, Shiseido lags far behind European and American companies. While its market cap has stagnated at the 2-trillon-yen level, L'Oreal and Estee Lauder are valued at 98 billion euros ($120.12 billion or 13 trillion yen) and $49 billion (5.4 trillion yen), respectively.

On Wednesday, Shiseido announced an upward revision of its earnings projection for the just-ended business year. But its stock stalled on Thursday after hitting a ceiling of 5,766 yen, up 5% from the previous day, in morning trading, suggesting that investors are calling for the company to offer solutions to its pending problems after hitting its sales target early.

Shiseido plans to release a medium-term business plan through 2020 on March 5. Measures to rebuild the business in the Americas and steady implementation of the plan are indispensable for Shiseido to catch up with and overtake world market leaders.