The problem is said to have worsened in the 1990s, as the expansion of agricultural irrigation systems has dried out the peatlands. 2015 was the worst year since 1997, with the scope of the wildfires growing beyond Borneo and Sumatra to nearby islands. The resulting haze forced state-run airline Garuda Indonesia to cancel over 400 flights; in Singapore and Malaysia, elementary and junior high schools were shut down. 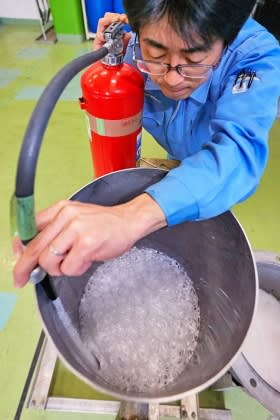 Enter Shabondama Soap. The soap maker in the southern Japanese city of Kitakyushu worked with the municipal Fire and Disaster Management Bureau and researchers at the University of Kitakyushu to develop a new foam agent.

The company is known for additive-free soaps made from natural materials such as animal fat, vegetable oil and caustic soda. It used this know-how in developing the fire-extinguishing agent, which is touted as environmentally friendly and capable of controlling blazes with less water.

The concoction was tested in Palangkaraya, in the Indonesian portion of Borneo, in September 2015. Foam infused with the agent was sprayed on burning land. Just 3.6 liters of water were used per square meter -- half the amount needed in a comparison test without the agent.

Researchers subsequently found that, 10 months later, the charred ground hit with the agent was covered in lush greenery.

Takayoshi Kawahara, who heads Shabondama Soap's research and development department, said the test in Indonesia proved the soap-based agent "can extinguish peatland fires, which are hard to control, with less water, and that it affects the environment less where it was splashed."

"We are sure we can develop a wider market for the agent in countries other than Indonesia where forest fires are a major problem," Kawahara added.

From buildings to brush fires

The major earthquake that struck western Japan back in 1995 highlighted the need for a clean, efficient firefighting agent. Falling buildings and raging infernos killed more than 6,000 people.

Kitakyushu's Fire and Disaster Management Bureau, which helped combat the fires, asked Shabondama Soap to develop such a product. The effort started in 2001; University of Kitakyushu researchers came on board later.

The team put a foam agent for buildings on the market in 2007 -- after producing more than 800 prototypes and conducting tests with a fire engine. Shabondama Soap has since been pitching the advantages of soap-based agents to fire departments and local governments around Japan.

The company turned its attention to foreign wildfires upon learning that the Indonesian municipality of Balikpapan, which has a partnership arrangement with Kitakyushu, was looking for ways to control burning peatland.

Kawahara and members of the development team visited Balikpapan to analyze the characteristics of peatland fires. The team tested prototype agents in Balikpapan and Palangkaraya as part of a technological assistance program run by the Japan International Cooperation Agency.

The team managed to create a foam that lasts longer and enhances water permeation on the target. Once the peatland product was ready in November 2015, Shabondama Soap received orders for about 6 tons of it from an Indonesian trading company specializing in firefighting equipment.

This year, the company has received no orders for the agent. Unusually wet conditions have offered Indonesia a respite from fires and haze. Next year could test the product's viability, since drier conditions are expected.

In any case, the lack of orders adds impetus for Shabondama Soap to push into other markets as well. Price-wise, its agent is competitive, particularly when you consider that products derived from natural ingredients tend to be more expensive than their synthetic counterparts. Shabondama's agent costs about $256 per 20 liters -- virtually on par with import prices of an American product that uses synthetic surfactants.

"Our foam extinguisher agent is the only one that has proved to be effective on real peatland fires with a low environmental load," Shabondama Soap President Hayato Morita said. He added that the company plans to showcase that effectiveness to raise its global profile.

"We want to expand the market from Indonesia to other parts of the world where forest fires are a major issue, such as the U.S. and Australia."